Stages of Life: Eric Bikales on the remastering of Lawrence’s Sanctuary 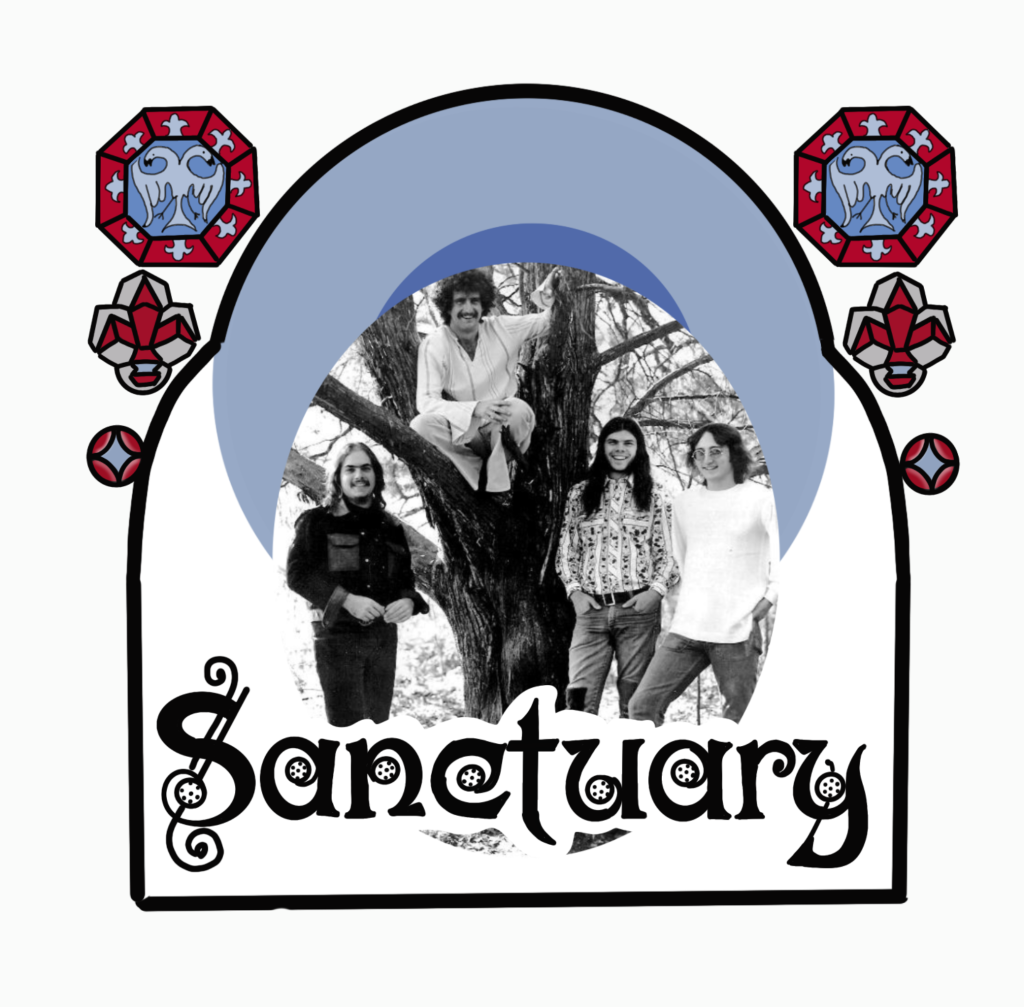 Circa 1971, singer and bassist Dennis Loewen had reached the limits of what he could do with his longtime band, The Fabulous Flippers. Originating in Hays, the garage-soul act was the party band of choice in the Midwest for the better part of a decade.

The group was highlighted alongside soul and rock band, The Red Dogs; and folk rock troop, The Blue Things, as features for Mid-Continent Productions. When Loewen decided he’d had enough, he started a group called the Magnificent Sanctuary Band—yet, again, another band with a big horn section. While it didn’t last for very long, it morphed into a four-piece called Funk Punch.

Funk Punch then became Sanctuary, which was as far from the Flippers’ party band as one could imagine. Much as The Beatles went from covers of Little Richard and Carl Perkins to “While My Guitar Gently Weeps” or “Strawberry Fields Forever,” so did Loewen go from “The Harlem Shuffle” to Yes’ “Time And A Word” and Edgar Winter’s “Winter’s Dream.”

Sanctuary had a short run, but their sole self-titled LP, recorded in 1971 at the Red Dog Inn (now Liberty Hall), has become something of a collector’s item for progressive rock heads. The rare mix of keyboard and flute accents appealed to connoisseurs.

Unavailable since its initial release on the Lawrence-based Veritas label, it’s being reissued this month via Sundazed Records on vinyl, and is making its compact disc debut with four bonus cuts. To get the story of how this underground classic came to be, keyboardist and flute player Eric Bikales, lent a musical and explanative ear.

The Birth of Sanctuary

Eric Bikales: They needed a keyboard player. [Loewen] had already met Roger Bruner, who’s a very talented singer/songwriter/guitar player from Minneapolis. Roger and Dennis, they just hit it off, and they had a drummer who was exceptional.

I had become disillusioned with University of Kansas and I quit and it had nothing to do with Dennis and his efforts. It is just something that happened to me. I just didn’t like the music school at KU and I felt like I was spinning my wheels, so I quit.

I hadn’t been out of school for two weeks before I got this call from Mid-Continent: “Would you like to do some playing with this little band called Funk Punch?” I went down and jammed with him and we really hit it off. It was great. The only thing about it was that I felt like their drummer–even though he was really good—my best friend that I’d grown up with was actually better. I felt like Norm Weinberg would just be the perfect compliment and Dennis was open-minded enough to say, “Well, let’s have a little jam session with him and see what happens.”

We did, and it was so magical and so great for us that Norm actually quit school, figuring he could go back and finish up someday, which is exactly what he did.

A Short but Powerful Tenure

I wish we would’ve had a stretch, like some of these other bands in the Midwest where they’ve been around for years, and years, and years, and everybody knew them. We were kind of a bright star that burned out quickly because I think we started in probably ‘71, and I think sometime in ‘73 it was all over.

When we first got together with the new members, Mid-Continent said, “Why don’t you go rehearse it at the Red Dog?” That was the central watering hole for everybody back then. Mike Murphy, who was our manager said, “We need to have some promotional material, like a recording or something that we can get you guys off the ground,” so we got this idea to make a record, but we’d only been together for two or three weeks. We were absolutely new and just exploring the possibilities, so we literally threw that record together.

We were fortunate enough to have a sound man, because of our manager, Mike Murphy. I mean, that guy invested a lot in us. I’d never been at a band before that that had its own sound man and light man. Murphy bought us a vehicle to tow a trailer with all our equipment. He bought us a huge PA system and the coolest thing of all, for me—he bought us a Mellotron. Nobody had one of those. Nobody had a Mellotron. You had to go listen to the Moody Blues if you wanted to hear a Mellotron.

It was the most finicky, ill-designed instrument that you could imagine. In the wintertime, it was just hell. You’d take it out of the trailer and get it in to the warm air as quickly as possible to let it acclimate. Maybe after three hours it would settle down so that you could play a note without it wobbling. But that wasn’t the only thing. Sanctuary really wanted to have a piano.

I really wanted to play real piano because that’s my first instrument. So, we managed to find a little piano manufacturer that made small pianos, and we bought one. So, Sanctuary toured around with a piano and a Mellotron. I had to tune the piano every gig and—oh my God, tuning a piano? That’s not for the faint of heart.

When it came to the studio, our soundman, Boone Anderson, from Boone, Iowa—he was really into it. He was one of those guys that knew electronics. He knew sound. He knew the technical side of what was out there. To this day, he runs a major showroom in Las Vegas. He’s their main sound guy. He’s in charge of everything. But back then he owned a Crown four-track tape recorder, which was pretty hot stuff. Hardly anybody had a Crown.

So, we had a really long snake, and we ran it all the way from the offices in the back of the Red Dog where Mid-Continent was. We made that into the control room and then we set up on the stage. We literally had to run through our material with no mistakes. We couldn’t do any punch-ins because of the nature of what we were doing. I mean, we couldn’t even talk to each other. It would take 10 minutes to go up and talk to Boone in the control room.

For instance, when I did a flute solo, I couldn’t use the microphone on the stage, because two of the other instruments would leak into it, so I had to jump off the stage, run downstairs into the basement, into the boiler room, and put on a pair of headphones real quick and start playing the flute. I had to do that in four bars. That’s about all we could afford—a little separation between whatever we had just played and where the flute solo starts.

It was a bit of an athletic experience. Then I’d have to run back upstairs, put my flute away, and start playing keyboards again. It was all choreographed. And we’d only been together for a few weeks!

Norm, our drummer, found an old Sanctuary album on eBay for, like, $350 and we thought, “Oh, my God, this is amazing,” because I’ve had that experience where we worked really hard on an album and years later, we see it in the record store bargain bin for 69 cents.

We weren’t copying other people’s arrangements, even with the Edgar Winter medley. We worked out the chord changes and then we did it our own way. This is how we approached everything.

Sundazed Records was owned and started by a guy named Bob Irwin. Bob is a producer, great guitar player, and he’s a very smart and very talented guy who happens to live down the street from me in Leiper’s Fork. We had heard each other play at the local watering hole. When I first moved here, I used to go down there and play all the time. I started playing with Bob and we got a little jazz group together, just four of us.

At one point, I was telling him about Sanctuary and he said, “I should check this out because I have this record company, Sundazed, that I started in New York.” This was about three years ago. Bob said, “I’d like to check out Sanctuary and see if there’s a way we could maybe rerelease that record you made.” Then came the pandemic, and life’s upheavals, and then in the middle of that somewhere, Bob decided to sell the entire operation to somebody here in Nashville.

It was a very slow process. It just took forever. Sometimes it was difficult, but it did eventually happen. I went down to Bob’s house. I brought the masters. I went out and collected all the masters that we had done and somehow, I just got so lucky because I was able to get our original Sanctuary masters from Boone, who had them stored away in his garage in Palm Springs.

He sent them to me, I took ‘em down to Bob’s house, and we remastered the record at his place. We couldn’t have asked for a better situation. And to this day, all the four guys in Sanctuary are still best of friends. Never had an argument. Never had a nasty word. It’s been a strange and wonderful tale that we have. We’ve just been lucky, and I’m very grateful for that.