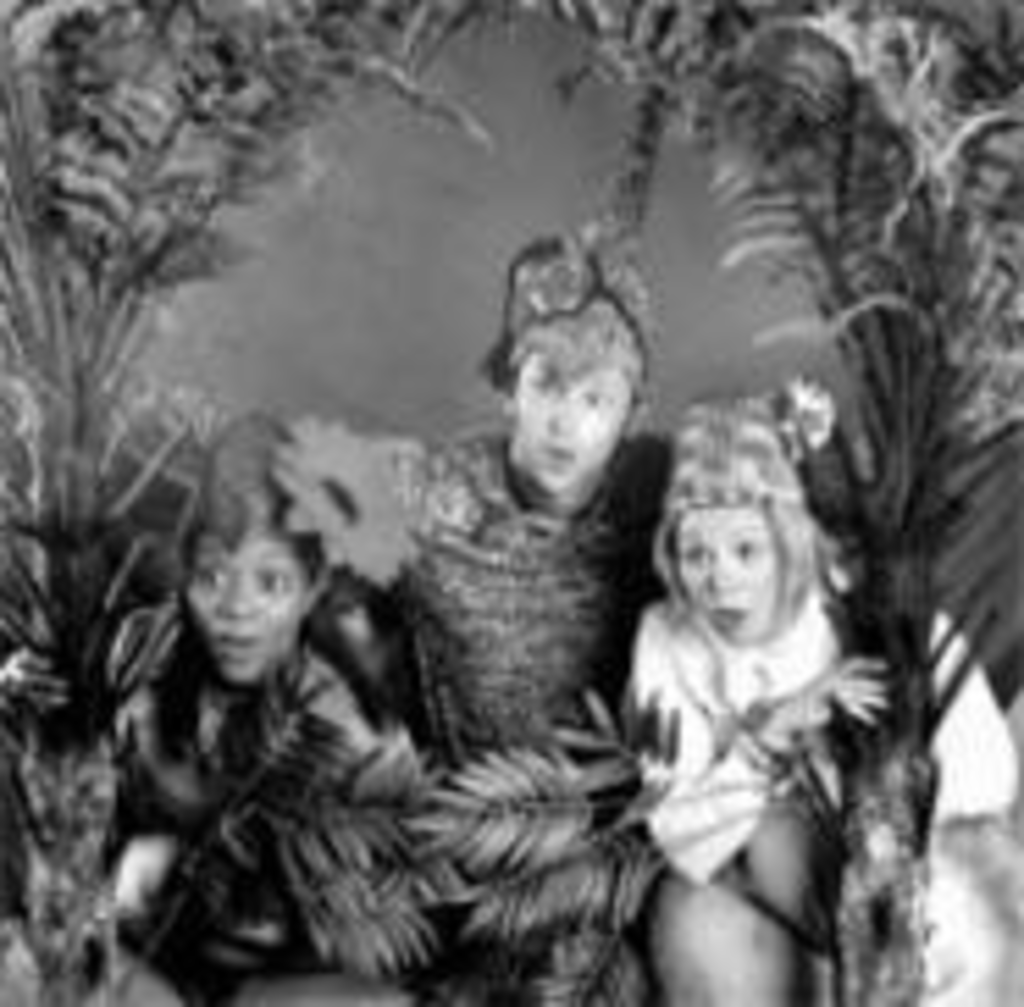 The Bad Seedling Late Night gives its standard treatment to ’50s horror flick The Bad Seed, the tale of a homicidal 8-year-old girl, here played by a 6-foot-tall man. Expect cross-dressing, sight-gags and lots of raunchy (and sometimes groaningly obvious) double entendres. But the show offers more than that. Ron Megee’s script rises above the schtick, and both Megee and Corrie Van Ausdal — a gifted comic actress born to play dress-up — stir big laughs. Unlike their insular Purple Rain awhile back, this show doesn’t rely on the audience’s familiarity with the original (or with Late Night) to win us over. Best of all are the dresses Gary Campbell has whipped up, especially Megee’s pinafores. Through July 30 at Late Night Theatre, 1531 Grand, 816-235-6222. (Reviewed in the July 7 issue)

The Dinosaur Musical You trembled when the creatures in Jurassic Park learned to open doors, so what hope have we now that they’ve mastered the old one-two rock step? It’s family fun with thunder lizards as the Coterie explores the rift between vegetarian and carnivorous dinos. A pair of leaf-loving sauropods hole up in the Paradise Hotel — called, by director Ernie Nolan, an “art-deco heaven” — to sing, tell stories and deny their impending extinction. Through Aug. 7 at the Coterie Theatre at Crown Center, 2450 Grand, 816-474-6552.

Let’s Do It Beyond melody and rhyme, the key to Cole Porter’s genius was his ability to make everything at once dirty and sophisticated. Before he wrote “Let’s Do It,” that biologists’ tour-de-force that isn’t really about falling in love, was it a word to giggle at? That Porter feeling — being sexy, grown-up and clever all at the same time — is what we used to call adult, back before video stores dirtied it up. Showcasing Jim Korinke, Melinda MacDonald and J. Kent Barnhart, Quality Hill’s revue tries to reclaim the word. Wear something nice. Through Aug. 7 at Quality Hill Playhouse, 303 W. 10th St., 816-421-1700.

Much Ado About Nothing Cast and director salvage much of what Shakespeare botches, but there’s no way around the fact that this play — despite the soaring comic duets between David Fritts’ Benedick and Mary McCrary’s Beatrice — is repetitious and not always inspired. Director Sidonie Garrett lingers on what works, hustles through what doesn’t, and doesn’t shy from the darker edges. A good joke, pretty well told, but there are other, better ones we need to hear more. Through July 17 at Southmoreland Park, 47th St. and Oak. Free on the lawn; call 816-531-7728 for reserved seats. (Reviewed in the June 30 issue)

Sabrina Fair After making good with the challenging Proof, the Bell Road Barn Players lighten up with the romantic Sabrina Fair, as charming a show as anyone could ever hope for. But it’s Sabrina as in Audrey Hepburn, so even this easygoing fare is not without its challenges: Forget filling her shoes, what will they do about her lips, eyes and brows? And if there isn’t a team of hatmakers working around the clock, there will be hell to pay. The script is familiar but witty, with more bite on class matters than you might expect. Let’s wish for Bogart, not Harrison Ford. And Salem, the teenage witch’s cheap puppet cat. Through July 23 at the Bell Road Barn Players, 8700 River Park Dr. in Parkville,
816-587-0218.

Singin’ in the Rain Johnson County’s rag-tag bunch of misfits takes a crack at the greatest movie ever made. (That the pros out at Starlight will soon try it only adds to the Bad News Bears vibe.) The shows at Shawnee Mission Park’s Theatre in the Park are always enthusiastic, with strongish leads and plucky ensemble work, and they tend to zip right along. (If it’s not holding your attention, you could probably head over to the watch tower near the south entrance and score a nickel bag off some high schoolers.) Bring a blanket, bug spray and — just to be on the safe side — no knowledge whatsoever of Gene Kelly and Donald O’Conner. Through July 24 at Shawnee Mission Park, 17501 Midland Dr. in Shawnee, 913-631-1164.

The Underpants For everyone who’s been dying for Steve Martin to become funny again, the Wyandotte Players offer The Underpants, baby steps toward his redemption. (Too bad that Pink Panther remake is going to shitcan Martin right back.) Here, Martin adapts Carl Sternheim’s 1911 play about the trouble (and shame) that results when a young woman’s panties slide to her ankles as she waves to a king. It’s a comedy — a farce even — with absurdist leanings and host of flying knickers. Through July 17 at the Kansas City, Kansas, Community College’s Performing Arts Center, 7250 State Ave. in Kansas City, Kan., 913-449-2301.

Jan 26 @ 7:30 pm City Stage
Jessie feels like a stranger in her own story, and she’s ready to end it. Kansas City Actors Theatre presents Marsha Norman’s Pulitzer Prize-winning drama of a woman driven to her breaking point. A harsh reflection on modern life and its purpose told with sympathy and humor, the psychological exploration of this show will leave a powerful and indelible impression....
Tickets
Martha Redbone–Bone Hill: The Concert

Jan 26 @ 7:30 pm Lied Center
Bone Hill: The Concert is an interdisciplinary musical theatre work created by Martha Redbone and Aaron Whitby that brings to light an important piece of American history that’s never been told. Inspired by the lives of Redbone’s family in the hills of coal-mining Appalachia, their story is shared through songs spanning a swath of American music—from traditional Cherokee chants and...
January 2020 Jan 2020
Subscribe