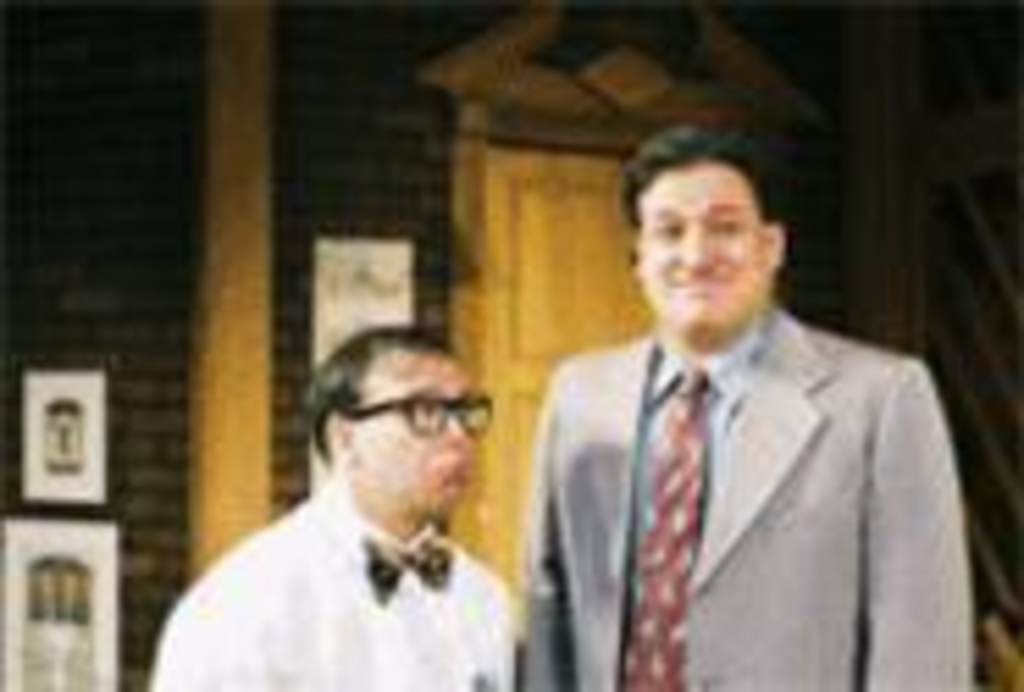 The Nerd Sunny, skilled performances from the principals — especially Ron Megee, plutocrat du jour Kip Niven and appealing straight man Craig Benton — can’t keep author Larry Shue’s comedy from grating. Everything is subordinate to the laugh, including sense and character; it’s a shame, then, that most of the jokes are as sharp as a wet Frito. Some connect, though, and much of the ginned-up crowd roared once the show made it through its laborious set-ups to deliver the payoffs. Still, you feel the punch lines coming before they hit, which inspired audience members to shout them to the cast. Written back before geeks took over our culture, The Nerd has no sympathy for its titular twerp, who is a monster of annoyance. This is Birth of a Nation for geek haters. Through Feb. 26 at American Heartland Theatre at Crown Center, 2450 Grand, 816-842-9999. (Reviewed in our Jan. 19 issue.)

Nothin’ Like a Dame: A Salute to Broadway’s Leading Ladies Why does droppin’ the g signify Broadway? Whatever the answer, we’re always inclined toward dropping some cash on Quality Hill’s sparkling cabaret revues, for which this town’s finest singers don razzle-dazzle gowns and tuxes — well, mostly gowns this time — to barnstorm through J. Kent Barnhart’s light, witty arrangements in the extremely intimate Playhouse. This go-round, they’re promising tunes from Cabaret, Funny Girl, Annie Get Your Gun and other perennials. Might we nominate muppety Stephanie’s heartbreaking “There’s a Fine, Fine Line” from Avenue Q? Through Feb. 19 at Quality Hill Playhouse, 303 W. 10th St., 816-421-1700.

A Raisin in the Sun When literature becomes enshrined in English college textbooks, it often becomes frozen, making it seem as remote as Tartuffe. So if this revival of Lorraine Hansberry’s classic whiffs to you of homework, bear in mind that this is no Our Town. Few popular American plays expose more truth or hurt, and it’s all much funnier than you remember. As always, the Younger family perseveres through hardships, familial strife and the institutionalized racism of postwar America. With a fancy-pants KC Rep production, you know the poverty will be a little pretty. Now, is there any way we can get them to stage a show about today’s racism? Through Feb. 12 at Kansas City Repertory Theatre, 4949 Cherry, 816-235-2700.

Sparts Radio We’ve long moaned about how most arts coverage — especially on radio and in daily papers — is a still-blooded affair of thin voices and page counts, especially compared with the passionate roar of sports reporters. William Truesdell of Prairie Village feels our pain. His family-appropriate new comedy, a find from the 2005 Kansas City Playwrights Festival, concerns a desperate format change at an in-the-red talk-radio station: Instead of covering sports, the format becomes “arts talk with an attitude!” This is TymeWorks Productions’ follow-up to last year’s wonderfully sordid Killer Joe, a show that succeeded in its every ambition. So when they call this a romantic screwball comedy, we’re inclined to believe them. Through Feb. 5 at Just Off Broadway Theatre, 3051 Central, 816-784-5020.

The Witch of Blackbird Pond Elizabeth George Speare’s Newbery Medal-winning tale of 17th-century witch-hunting receives the spirited Coterie treatment. Teenage Kit, an outsider in rural Connecticut, runs afoul of the local Puritans, who disdain her out-of-town mores. Soon, a crisis in the town leads to accusations of witchcraft. Much of the cast hails from UMKC’s theater department, including many of the young actors who made last month’s The Maids Tragedy so thrilling. Yes, this is children’s theater, which means lessons to be learned, but we’re expecting real drama, not some sort of Nerf Crucible. Through Feb. 19 at the Coterie Theatre, Crown Center, 2450 Grand. 816-474-6552.