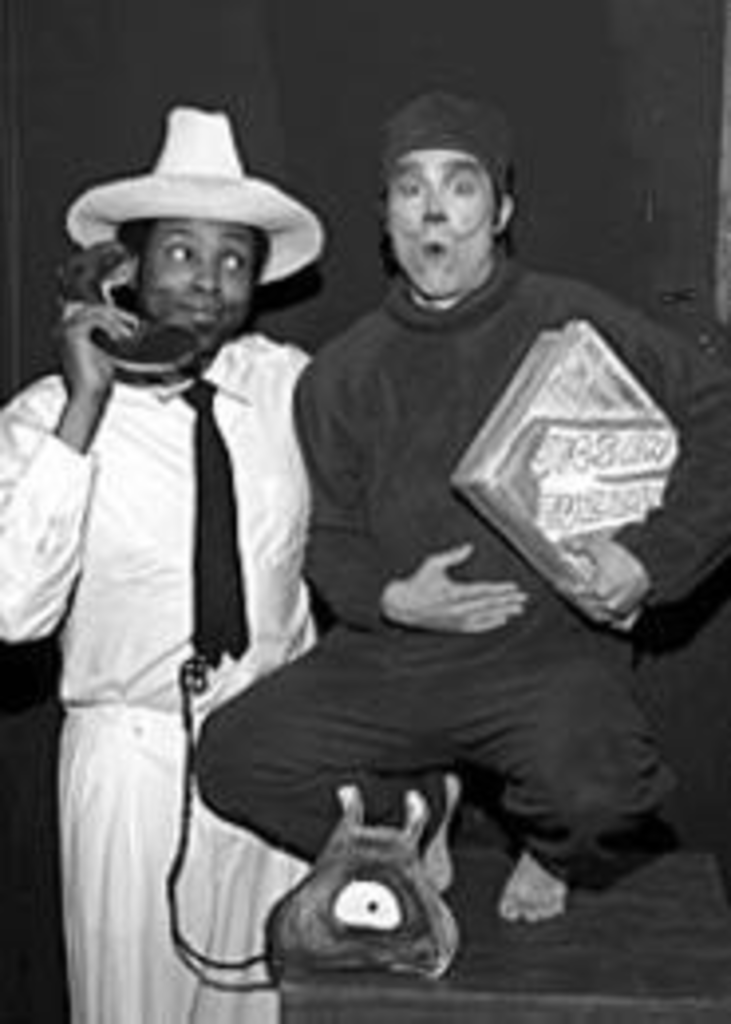 Curious George While actor Ry Kincaid plays screen icon James Dean at night at the Westport Coffee House in the June production of Little Bastard, he’s making a monkey of himself during the day for Theatre for Young America. Playing the title role in Curious George , Kincaid reprises the simian role and mannerisms he created for TYA’s hit Curious George last season. This new version, directed by Val Mackey, compresses three Hans A. Rey books: Rides a Bicycle, Goes to the Hospital and Gets a Medal. June 8-27 at 5909 Johnson Dr. in Mission, 913-831-2131. July 1-17 at City Stage at Union Station, 30 W. Pershing Rd., 816-460-2020.

Forbidden Broadway The Theater League is resuscitating this sendup of Broadway with a mix of parodies old and new at Union’s Station’s City Stage. Lampooning stage icons from Ethel Merman to the dark, ambisexual revival of Cabaret are Forbidden Broadway veterans such as Cathy Barnett, Don Richard and Becky Barta. They’ve all done the show for many years but are still expert at milking laughs from such things as the poverty chic of Les Miserables. With John Michael Zuerlein. Through August 1 at Union Station, 30 West Pershing Rd., 816-460-2020.

Gypsy One of musical theater’s last living gods, Stephen Sondheim, wasn’t yet 30 when his lyrics for Gypsy debuted on Broadway alongside Jule Styne’s music and Arthur Laurents’ book. That the Lawrence Community Theatre is mounting the show is surely a sign that the summer musical season is upon us. Annette Cook has the formidable role of Mama Rose, the overbearing, narcissistic stage mother whose skills at manipulating the fringes of show business created stripper Gypsy Rose Lee and B-movie star June Havoc. Many say Gypsy is one of the five best musicals ever written. The argument starts when you try to name the other four. Through June 20 at the Lawrence Community Theatre, 1501 New Hampshire, Lawrence, 785-843-7469.

Menopause the Musical Until the last twenty minutes of what is essentially a musical-comedy salute to hot flashes, the jokes in this production are stale or stolen outright. And reading between the lines reveals not-so-funny insight into such social embarrassments as water retention and marital infidelity. So it is without warning that the show later takes a measurable turn into the joys of self-pleasure. The cast, especially Chavez Ravine, is pardonable, managing to reheat these leftovers. With her tangy, delicious Tina Turner take-off, Ravine — a terrific singer with mammoth stage presence — steals the show without an ounce of regret. Through June 27 at the American Heartland Theatre, 2450 Grand Ave., 816-842-9999.

The Rainmaker InPlay’s 2003 production of Nothing Comes to Sleepers was one of the better shows of that year, so it comes into its new show, The Rainmaker, with a pretty good track record. N. Richard Nash’s play about a ranch family struggling through a Kansas drought offers as its most animated metaphor the character of Lizzie. When a charismatic drifter named Starbuck enters the family’s life with promises of better weather through divine intervention, the family’s prospects for survival — and for a possible suitor for spinsterish Lizzie —turn much rosier. Directed by Frances Farah, The Rainmaker will be staged at Just Off Broadway in Penn Valley Park through June 26. Call 816-235-6222 for tickets.

The School for Scandal During the run of Richard Sheridan’s Restoration-era comedy The School for Scandal at the City Theatre of Independence, the cast surely hopes to make good on a Sheridan quote from another of his famous plays, The Rivals: “Where they do agree on stage, their unanimity is wonderful.” Like a precursor to a Merchant-Ivory film or an Edith Wharton novel, School for Scandal concerns the propensity of the upper classes to relish gossip, blackmail and other truth-stretching privileges of their collective station. Directed by Jason Vivone, the show runs June 11-13 at the Roger T. Sermon Center, 201 N. Dodgion in Independence, 816-325-7367.