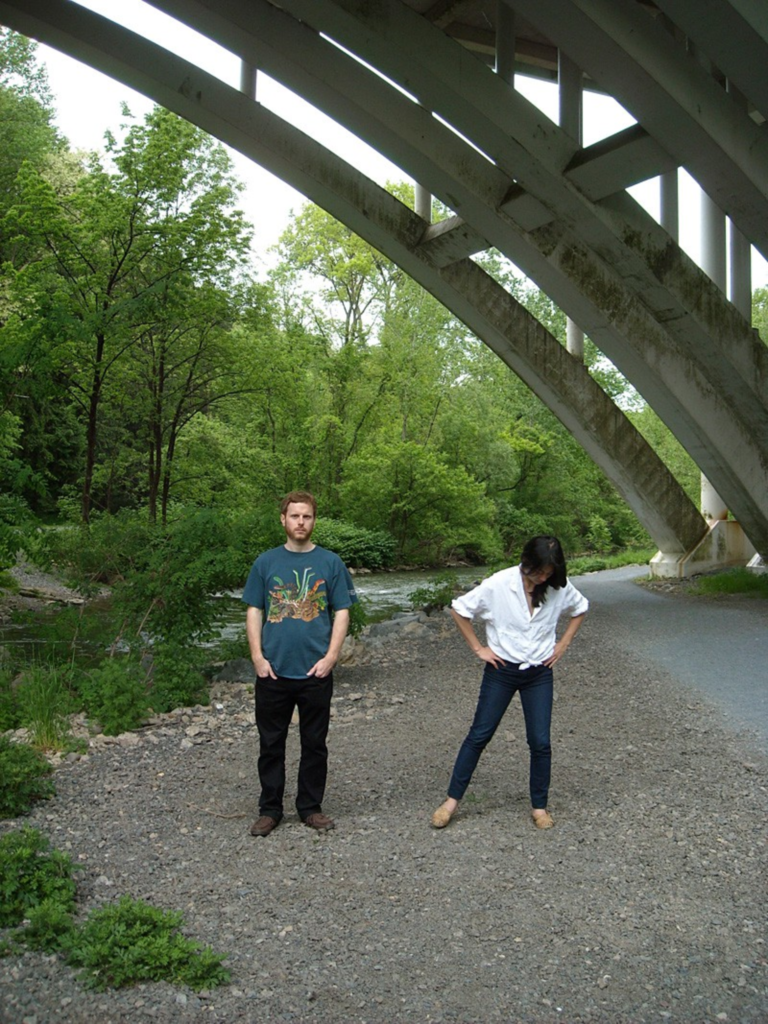 “We haven’t really solved that issue,” says Blues Control keyboardist Lea Cho, referring to the genre-bending duo’s reliance on cassette decks in its live show. How do she and guitarist Russ Waterhouse deal with maintenance issues when those old decks malfunction or break down on the road?

“We bought a ton of new ones at one point,” Cho continues, “because we were sick of having to go out and buy them in a hurry. So we haven’t had an emergency lately. But it’s still an issue. Like, during one show, the cover came off of one of them.”

“I went to film school,” Waterhouse adds, “and I had to use reel-to-reel decks and recorded on eight-track. So I’m familiar with cleaning the components. But I’ll be honest: I’m probably a bit lazier about that stuff than I should be.”

Life partners in addition to being each other’s sole bandmate, Cho and Waterhouse breeze through a range of topics with an easeful rapport that, at least from an outside perspective, appears almost frictionless. It’s a fitting parallel to their music, which they began making together in New York City under the moniker Watersports in 2003. At the time, Cho and Waterhouse listened avidly to noise music but also embraced new age — their term — stylings. (They once placed a microphone on a fountain at a live show.) In 2006, they were asked to play a show each week after appearing as Watersports, so they came up with an entirely new batch of material, thinking that they’d make one or two appearances and go back to playing as Watersports. But Blues Control quickly evolved into their main focus.

“A lot of what we were inclined to do in Watersports kind of rolled over into Blues Control after a certain point,” Waterhouse explains. “We were using the exact same gear, just played for a different effect. It was collage-oriented live mixing of tapes. But Watersports was less oriented toward melody, and there was more room for improvisation, even when it was melodic. Things were intentionally static, slow and meditative. There are Blues Control songs that are new-agey; there’s still more emphasis on songwriting.”

Still none of the labels that are typically used to describe the group — experimental, noise, rock, Latin jazz, fusion, prog, or even the “blues” in the band name — prepare you for what its music actually sounds like. “Love’s a Rondo,” the opening number on the latest album, Valley Tangents, pours from the speakers fragrant with familiar overtones along the lines of, say, Phish quoting Chico O’Farrill’s Afro-Latin big-band jazz. The influences sound obvious yet simultaneously warped beyond recognition, and none of the songs give a fair indication of what the album is like as a whole.

Valley Tangents has some AOR tendencies, but its cohesiveness and polish aren’t indicative of Cho and Waterhouse’s declining interest in noise music. If anything, the fact that they can draw from Bruce Hornsby and Debussy makes the album more, not less, daring than previous work. And then there are the live shows, in which Cho and Waterhouse prefer to re-contextualize the material.

“Sometimes our set-list discussions go way too long,” Cho says, “because we’re forming this trajectory that has a beginning, middle and an end. There’s definitely a lot of thought that goes into pacing and order.”

They use prerecorded backing tracks (mostly played by themselves) recorded onto cassettes, but they manipulate the speeds at which the tapes play, using tape speed almost as an instrument unto itself. They also switch around the backing tracks on some of the songs, so that one is likely to hear a song off one of Blues Control’s four studio albums (depending on how you count) at a show with a completely different sonic backdrop. And they delve often into tunes and interludes that aren’t on any of their recordings. Several of the songs go on for close to 10 minutes at a time, and musique concrète–style found sounds figure prominently into the ambience of the backing tracks. All suggestions to the contrary, Blues Control’s noisy, experimental streak remains intact — thanks, in large part, to the unpredictability of the tape decks themselves.

“[Tape decks] are not a precision piece of equipment,” Waterhouse says, “like a nice watch, where there’s a crystal regulating the speed. Most consumer tape decks are all over the place.”

“I don’t think they even try to make them nice,” Cho says. “Sometimes we’ve had a tape deck die that did this thing that we want to replicate that we can never find again. Especially in terms of speed. If one of them has the exact right speed that you needed, you could try 10 different decks of the same model afterward, and they’ll be too fast or too slow.”

Should we ever expect to see Blues Control smash a tape deck a la Pete Townshend?

“No, not a tape deck!” Cho says. “We’d smash something else before a tape deck.”

“I once ripped a book during a show,” she says. “It was our own book. It wasn’t an important book. I mean, I didn’t rip up a nice book.”