St. Paul and the Broken Bones’ Paul Janeway talks soul music ahead of the band’s sold-out show at RecordBar tonight 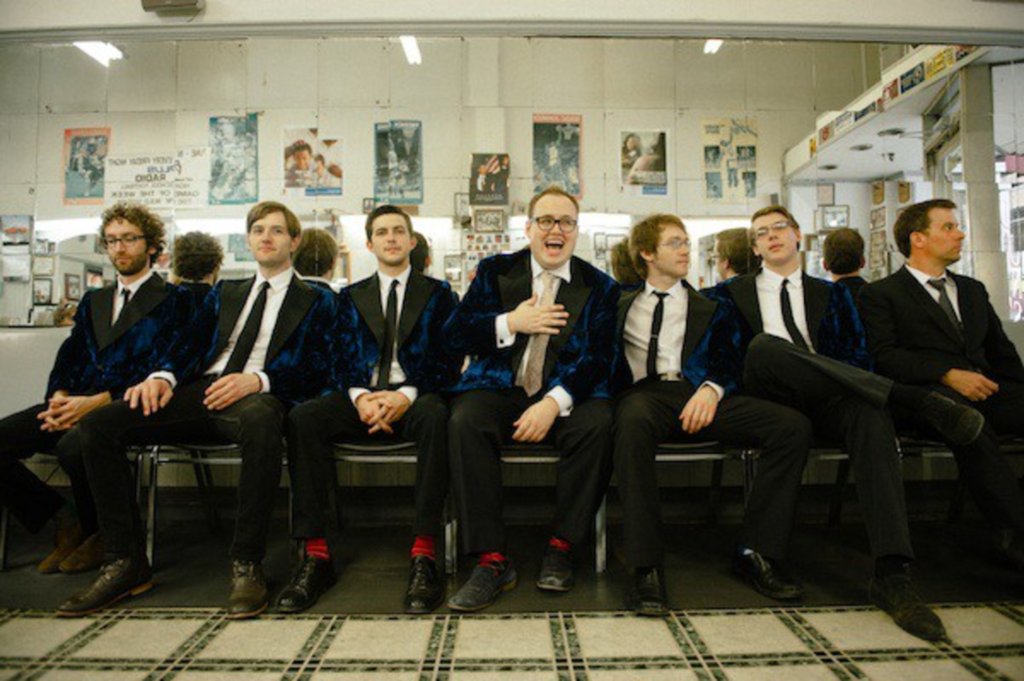 With his nerdy frames and average stature, you probably wouldn’t look twice at Paul Janeway if you passed him in the aisle at Target. Up until March, was working as a bank teller at a Wells Fargo. But the frontman’s magnetism is revealed with the seven-piece soul outfit St. Paul & the Broken Bones. Thanks to a breakthrough debut record – February’s Half the City – and a reputation for earth-shattering live performances (featuring a killer horn section), this Birmingham, Alabama band is currently winning hearts all over the country. St. Paul and the Broken Bones is inarguably one of the best new acts to come to light in 2014.

Half the City flaunts the influence of classic soul and Southern gospel. Janeway wails and belts his lyrics with a lion’s confidence on “Like a Mighty River”; he’s a male version of Sharon Jones on “Call Me”; and he channels Otis Redding on the bluesy, organ-driven “Grass Is Greener.” On stage, Janeway moves like the spirit of James Brown is occupying his body.

Ahead of tonight’s unmissable show at RecordBar, we chatted with Janeway from the road about how St. Paul and the Broken Bones was his “last hurrah” and what his fiancé thinks of his ardent female fans.

The Pitch: You specialize in making an old style, an old sound, sound new and refreshing. And you’re getting a ton of attention for it. Why do you think people are so ready to absorb the sound of St. Paul and the Broken Bones?

Paul Janeway: I think part of it is that people just want something real. We all play our instruments ourselves – what you hear on record, we can play live, and I don’t know if that’s the case with a lot of things now. I think people respond to that. It’s a raw emotion thing. You can not like our music, but you can still listen to it and think, “God, they put everything they got into it.”

I agree. And a lot of that is your voice – you have quite the set of pipes. When did you realize you could harness the vocal power of a million angels?

[Laughs.] In all honesty, I grew up in church and singing in church, and never thought I was much of a singer. When I was about 18 or 19 I had a little falling out with the church, and decided I was going to an open mic night. I had written a song or something and I did that, and my guitar playing wasn’t very good, but people really responded to the vocals and I thought, “Oh, maybe I’m not a bad singer.” I recorded it [the song], and thought maybe I could do it. That’s when I realized music was something I could do.

You’ve had a long and winding road since then. You’re 30 now – that’s a decade between when you started and what you have with St. Paul and the Broken Bones. What person or life experience has had the greatest influence on your music career?

Really it’s kind of a series of things, to be honest. It’s been a situation where I had thought I was a pretty good singer, and then, as we all know, there’s no money in music, really – not as far as playing original, especially in Birmingham. So I got a job at a construction shop and thought I’d do that and do my band thing on the side. So I was doing that, but there was always just something missing, you know? And finally this thing [St. Paul and the Broken Bones] got cranked up – me and Jesse [Phillips], the bass player, have been really good friends, and this was our last hurrah. I was in accounting school, and I was a part time bank teller and on with my life, really. This was a last thing to do, to kind of record our musical relationship. I was on the way out, really. I wasn’t gonna sing anymore.

And now… . [Laughs.] I think I’m gonna have a five-year career in this. That’s as high as I’m gonna go. Obviously we’ve been through the wringer. I mean, something was always missing – just a part of me. I wasn’t unhappy. I mean, that part of me was, because I love writing songs and performing, that part of me was hurt, but I just ignored it. Everybody gets that feeling. But it’s a lot better now.

[page]I’ve seen clips of your live shows. They seem insane. You really are giving it all. Where does that energy come from, and how do you keep it up night after night?

At SXSW, we did like nine shows in four days or something crazy. We’ve tried to see if that energy stops. I can be having a shitty day, a bad day – because sometimes you get down – and the moment I put that suit on and step on stage, something just clicks. All this energy. Something comes. I can be dead tired, and for some reason, the moment you get on stage, that adrenaline, that chance to perform for people, that ignites me. And that’s the way it should be. It should out a fire on your ass if you’re gonna do this. If you don’t get that, you shouldn’t be doing this.

You grew up with a heavily church-influenced household; contemporary rock music was banned for you at one point. What does your family think about the music you’re making now?

As I was growing up my parents were strict, but they got divorced when I was 16 or 17. Things really changed then, for my family included, and they got more open-minded after that. They’re big fans of what we do now. My mom doesn’t like it when I cuss on stage, but that’s the only thing she gets weird about. My dad initially was like “It probably won’t work out,” that kind of thing. But he’s just a pessimist. I was working at a storing goods store and I was like, I’m going to go ask for a job at a bank as a bank teller. And I got the job, and he goes “There’s gotta be something wrong with the bank. Why would they hire you?” He’s not being mean – that’s just the way he thinks. But he’s very proud and supportive now of what we’re doing.

Let’s talk about Half the City for a moment. You recorded it with Ben Tanner from the Alabama Shakes – are you close with that band? You certainly share a sort of “revivalist” approach to music.

I love those guys. Me and Ben, we’re buddies. I’ve hung out with Brittany [Howard, lead singer and guitarist] and them a few times. They’re awesome people, good folks. It’s interesting that we are from the same state, because I don’t think either one affected the other. It’s an odd coincidence, but I’ve always thought of them as a rock band. I listen to their album – and obviously Brittany is an unbelievable vocalist and songwriter – but when I listen to their album, I don’t necessarily think Stax Records. They don’t have a horn section. They’re a rock band with a soul influence. And we’re a soul band with a little tingling of rock. And I think our next album will be a lot more R&B. But any time someone puts us in that company, we’ll take it, any day of the week. It is interesting, though. We knew when we were working with Ben we were going to have to answer questions about the Alabama shakes.

Are you guys thinking about another record, or is it too soon to ask?

We’re definitely thinking about it. The thing about this record [Half the City] is that we recorded it a year and half ago, and we’re having a hard time writing stuff now because we’re on the road so much… And my favorite thing about music is creating it, and then shows are second. We might take some time off in the winter to get back to writing.

Speaking of touring, how is being on the road? I bet women in every city you go to want to sleep with you.

[Laughs.] Someone posted on Twitter – some girl asked me to marry her in Boston like “I asked Paul to marry me and he told me no,” and my fiancé calls me and was like, “What’s this with girls asking you to marry them?” And I was like “Sweetie, I told them no. I said no!” [Laughs.] They don’t call me St. Paul for no reason. That’s not my style. I’ve always been a relationship guy. That’s a whole other dynamic of this that is so weird. I’m St. Paul – it’s not a joke.

Tonight’s show is sold-out, but here’s the link anyway.