St. Louis’ Ultraman plays a rare show this Sunday at the Riot Room 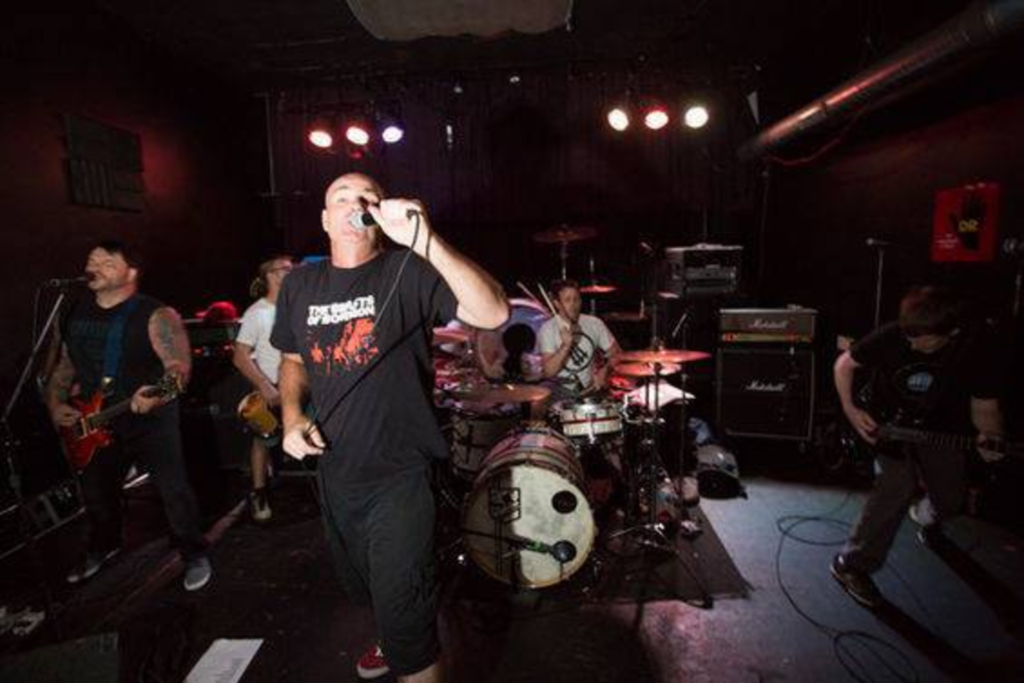 Despite hailing from just the other end of Interstate 70, it has been a few years since St. Louis hardcore act Ultraman has played Kansas City. The band has been around since 1986, broke up in 1991, and re-formed officially in 1999. Since then, they’ve played two or three shows a year.

One of Ultraman’s first performances this year is opening for Indianapolis punk outfit the Zero Boys at the Riot Room this Sunday. Singer Tim Jamison spoke with us by phone about the band’s history.

The Pitch: You guys don’t play all that often, do you?

Ultraman has gone on hiatus before, right? For most of the ’90s?

Technically. Officially, in ’91 the band broke up. It just ended. We came back from that second European tour, and that was it – we were done. We did one final show at the end of the year, in St. Louis, and then I guess it was ’93? It wasn’t that long; it was only a couple of years. I think we decided to do a reunion show because they asked us to play with fear at the Outhouse.

Bob Cutler had called and asked me about playing with Fear, and for whatever reason, I didn’t want to do it, but it just kind of sparked the idea of doing some shows. I’m not even sure why now. It was 20 years ago. [Laughs.] But, we did it. We actually went back to the Outhouse and played with this band Zipgun, in ’93.

That just kind of started the ball rolling. We didn’t do anything between ’93 and ’96, but ’96 was the 10th anniversary of the forming of that band, so we did that show, and we played Rancid a week later. After that … in ’97, we did a set of Damned covers. We were Ultradamned for one night. For the ’90s, that was pretty much it.

In ’96 was when I really started considering it – playing full-time again, or semi-full-time again. In ’99 was when I decided, “Screw it.” The band I was in right before that time was called Obsolete Man, and toward the end of that band, we started doing some Ultraman songs. It just felt cool to play them again, and I thought, “You know what? Let’s put it back together again and see what happens.”

What’s the lineup been since the band reconvened in ’99?

I was in three bands between ’91 and redoing it again in ’99, and he was the bass player in all three of them, so it was just the way it was going to be. Tim O’Saben was the guitar player – he was in Fragile Porcelain Mice – and this guy Bob Fancher, who, oddly enough at this point, has been in the band longer than any other guitar player, 15 years now. This guy, Jason Simpson, was the drummer in the first reconvened lineup, if you want to call it that. He was in a band with Bob Fancher called For the Last Time, which I really loved.

So, Rob Wagoner, who I started the band with, he decided he wanted to play, which worked out pretty well because Tim O’Saben was ready to start doing stuff with Fragile Porcelain Mice again. I guess that was in 2001. Jason, the drummer, quit… . I want to say in ’03? Right around the same time that Nicky Garrett from New Red Archives decided to put out another record with us. We’d sent him several demos, and the last batch we sent him, he really liked. So, he was like, “Let’s do another record.”

But, like I said, right around that time, Jason quit, so we got another drummer. This guy, Matt Schoenberg, who’d been in a band called Dogfight, he played with us for a couple of years. But now the lineup’s been the same since 2010. Mark Deniszuk, the drummer who played on the Freezing Inside and Nonexistence records, played with us off and on during this time period, too. I guess the album-release show for the Constant Weight of Zero – we did 3-4 shows that year with him.

[page]Where does the band stand in terms of recording now?

We just did some demos of, I think, 3-4 new songs. We have this new drummer, Gabe [Usery], who’s been with us since 2010. Gabe is an engineer, and so is our bass player, John, so recording is fairly simple for us. We’re working on new stuff. It’s just a much different process than the way it used to be. You practiced twice a week, somebody showed up with a new song, you hammered it out right there, and you’d play it at the next show.

For some reason [these days], it’s either one or the other: We can either work on new stuff or put a set together for a show. For some reason, we can’t quite put it together to do them together at the same time. Getting five people together who all have varying schedules – I mean, Bob owns a club called Fubar, so obviously, his schedule’s usually at night, whereas the rest of us are during the day. And, like I said, Gabe’s recording, so whenever he’s in the studio, he’s locked up. He’s got no time. It’s usually day and night.

So, it’s difficult, but we somehow still manage to get together.