Jones’ announcement highlights the growing divide among Black leaders in Missouri over Amendment 3, which seeks to legalize marijuana. 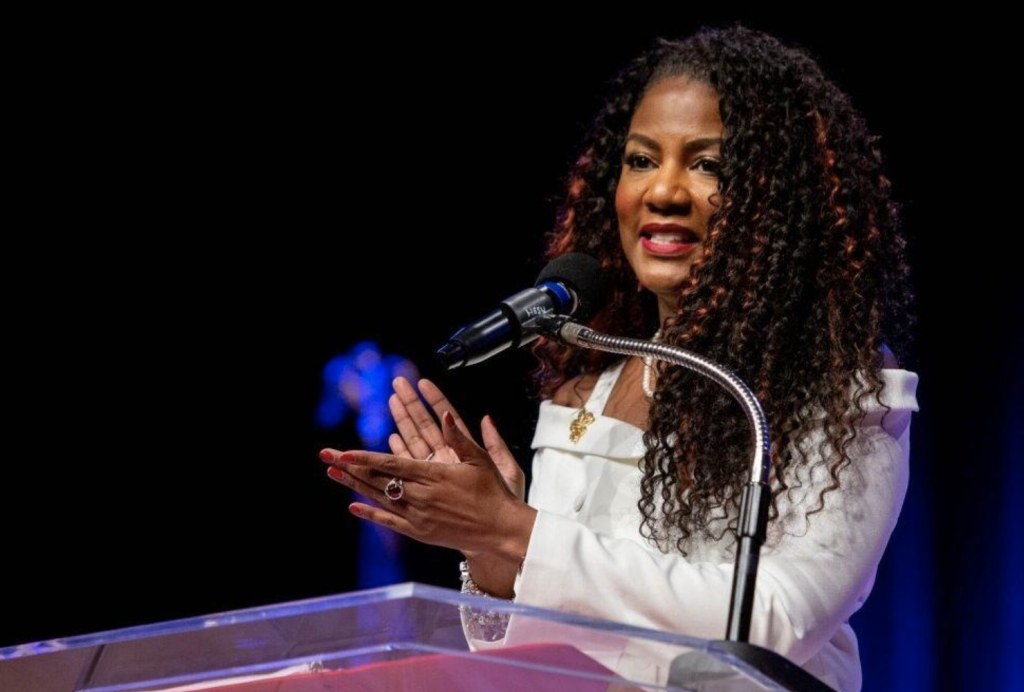 In a move highlighting a growing divide among Black leaders and organizations in Missouri over a push to legalize marijuana, St. Louis Mayor Tishaura Jones on Tuesday announced she would oppose the measure appearing on the Nov. 8 ballot as Amendment 3.

While she supports legalization, Jones said she doesn’t support etching what she believes is a potentially inequitable legalization process into the state’s constitution where “it can be difficult to alter.”

“If we choose the path of a constitutional amendment to resolve the matter of legalization, it would have to be forward-thinking, flexible and most of all, equitable,” Jones said in a statement. “This amendment fails to meet that lofty aim. Simply put, legalization does not equal decriminalization.”

Jones joins state Rep. Ashley Bland-Manlove, chair of the Missouri Legislative Black Caucus, who began advocating against Amendment 3 early on, as well as the Missouri NAACP, which announced its opposition last month.

Both argue the amendment will create the “permanent exclusion” of minorities from the cannabis industry.

Yet on the same day as Jones’ announcement, and on the other side of the state, Freedom Inc., a Black-led civil rights organization in Kansas City, announced its support of the amendment.

“Every day that goes by where cannabis is still illegal in Missouri, is a day when justice is not being served,” said Rodney Bland, president of Freedom Inc.

And while the statewide NAACP opposes the amendment, the St. Louis city chapter has been among its most vocal proponents.

“If the world is changing and voters overwhelmingly believe marijuana should be legal, then clearing past convictions is a moral imperative,” said John Payne, campaign manager for Legal Missouri 2022.

At the heart of the opponents’ concern with Amendment 3 are caps on licenses to grow, transport and sell marijuana that were imposed by state regulators after voters created Missouri’s medical marijuana program in 2018.

The state decided to only issue the minimum number of licenses allowed for medical marijuana — 60 cultivation licenses, 192 dispensary licenses and 86 manufacturing licenses. Since then, the state has issued around 20 additional licenses, including some which were ordered to be issued by the administrative hearing commission due to irregularities in the application scoring process.

“This amendment, despite having positive elements, reads like it was designed to benefit current vendors and license holders — not everyday people,” Jones said. “I recognize the problems and stratification created by the amendment’s licensing system.”

Nimrod Chapel, Jr., president of the Missouri NAACP, said after his organization announced its opposition to Amendment 3 that the proposal has the financial backing of many of the state’s largest medical marijuana license holders who are trying to “carve out the entire market for themselves.”

“They’re certainly Caucasian run, led and owned,” he said of the current medical marijuana license holders, “and minority participation has been completely left out of the equation.”

Amendment 3 supporters say the system’s racial inequities would be addressed through the 144 “micro licenses,” where applicants must be a resident from a ZIP code with high marijuana incarceration rates or meet other such requirements.

“That’s why I support it and pushed for the micro licenses piece,” Adolphus Pruitt, president of the St. Louis City NAACP chapter, said in an interview with The Independent last month, “because the micro license dictates that it goes to people who have been disadvantaged.”

Currently, one of the biggest struggles for many smaller medical marijuana companies is obtaining capital. Marijuana is still illegal on a federal level, so bank loans are not an option, Pruitt said.

Regarding the caps, Pruitt said it’s the state Department of Health and Senior Services that is capping the licenses, not the amendment language itself.

However, Chapel argues the companies funding the Amendment 3 campaign will lobby to keep the caps in place that have shut Black businesses out.

In the month before Election Day, Legal Missouri has raised $1.3 million from businesses involved in the marijuana industry. It has reported spending more than $1.4 million, with most of that going towards media buys.

Save Our State, the political action committee formed in September to oppose Amendment 3, has not reported raising any money.

It would set up a timeline for when courts have to expunge records depending on the class of offenses, where misdemeanor offenses would be adjudicated first. The courts would have one year to order the expungements of people who are not in jail or on parole or probation.

The fees and tax revenues from the marijuana program would go towards paying for expungements, according to the petition.

Supporters say the expungement measures are among the most far-reaching yet proposed in the nation.

“The War on Drugs has been primarily waged against people of color, and it’s time for the madness to end,” said Garrett Griffin, spokesman for Communities Creating Opportunities, in the joint statement with Freedom Inc. “Just as no one should have been rotting in prison in the 1920s over alcohol, no Missourian or American should be punished for using marijuana.”

Chapel pointed to a provision in the petition that states the funding for expungement is contingent on approval from the legislature and governor’s office.

And expungement, Chapel said, doesn’t appear to be their priority.

“I just look back at how the medical marijuana licensing process has gone, and it is full of nothing but controversy,” Chapel said. “I don’t have any expectation that the expungement program — which the legislature and perhaps the governor are not fully behind — would be run in any different or better way than the medical marijuana debacle.”

Payne said getting the legislature to make this appropriation doesn’t concern him because the funds “can’t be spent elsewhere.”

Opponents also expressed frustration that Amendment 3 includes certain penalties for marijuana use that, because they will be included in the state constitution, will be difficult to fix.

A change to the constitution must be approved by a statewide vote. Issues can be placed on the ballot either by the legislature or through the initiative petition process — which Chapel noted can be an expensive and time-consuming process.

“There seems to be a real spirit that this is good enough or this is going to be a good start,” Chapel said of Amendment 3. “But this is our constitution. It’s kind of a big deal, and I think that it’s worth our time to get it right.”