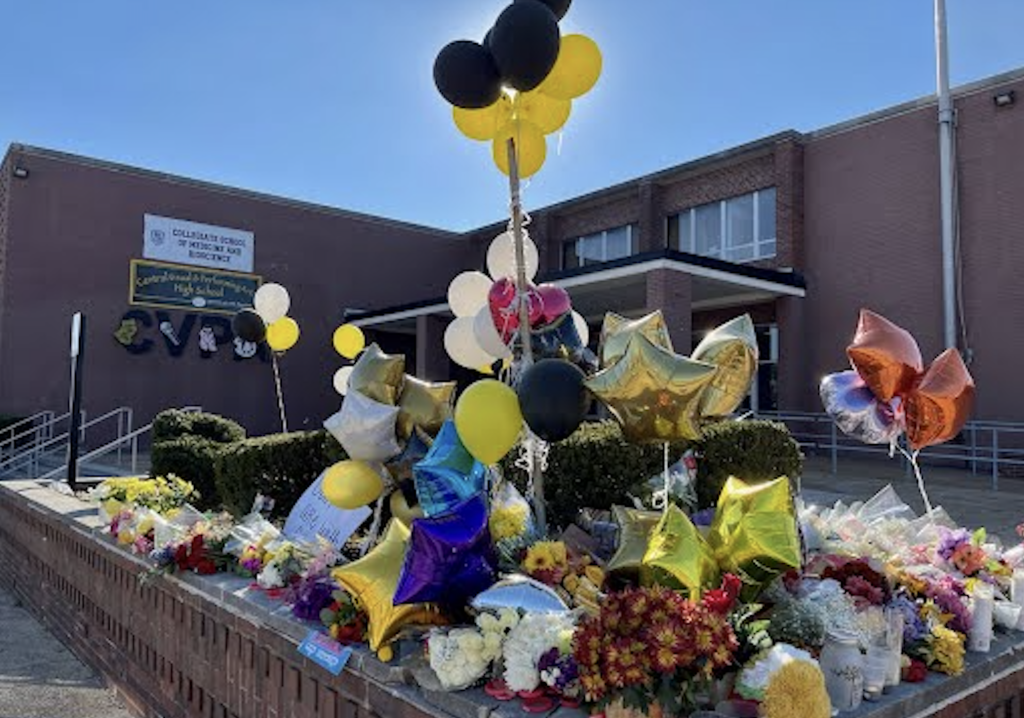 Rows of flowers and candles have been left in front of Central Visual and Performing Arts High School in St. Louis, following the tragic shooting on October 24, 2022 that left two dead and several others wounded. // Photo by Rebecca Rivas/Missouri Independent

The first time St. Louis Mayor Tishaura Jones publicly spoke about the tragic shooting at Central Visual and Performing Arts High School, it was just hours after a shooter took the lives of a 15-year-old student and a health teacher.

Jones was so visibly shaken with grief she could barely get out the words.

Now after two days of listening to students and community members, she said she’s gone from “sad to angry.”

And that anger on Wednesday was focused on state leaders who Jones said have offered their prayers since the tragedy but refuse to enact laws that would make it harder for people to obtain “weapons of war.”

“The time for thoughts and prayers are over,” Jones said during a briefing at the Metropolitan St. Louis Police Department . “It’s time for action. But the actions of the Missouri legislature in recent years have made gun violence far more likely to occur in our city and state.”

Jones is a part of a growing chorus of St. Louis community members and leaders demanding tighter gun restrictions in Missouri in response to the tragedy at Central VPA.

Interim St. Louis Police Chief Michael Sack read a passage from the shooter’s notebook Monday, where he wrote: “I’ve been an isolated loner my entire life. This was the perfect storm for a mass shooter.”

The investigation into how Harris obtained the gun is ongoing, Sack said Wednesday, but officials know a gun was previously taken out of his possession by the police within the past few months at the request of his mother.

It’s unclear whether or not he bought the gun and accessories from an unlicensed dealer. Missouri law does not require background checks on unlicensed gun sales, which aligns with federal law.

Harris came into the building Monday with more than 600 rounds of ammunition, Sack said.

State Sen. Karla May, D-St. Louis, told The Independent that the state needs to immediately ban assault weapons in Missouri.

“I don’t think we need warzone weapons in our communities,” May said.

She’s also demanding that the state reinstate the requirement to have a permit and safety training to carry a concealed firearm in public. Over the past five years, Republican legislators have pulled back almost all restrictions on carrying a firearm, May said.

“The gun laws are almost none,” she said.

“Trying to regulate guns, that doesn’t work. We know that,” Parson told Fox 2 News’s Emily Manley Tuesday. “That’s the political argument and again, if you’re someone that’s mentally unstable, you don’t know what that reaction is going to be. You can pass all the laws you want for that, but if they aren’t abiding by the law, it’s not going to make any difference.”

Missouri had the nation’s six highest gun-related death rate in 2019, according to the Centers for Disease Control and Prevention (CDC). That rate has steadily increased since Missouri passed its first conceal-carry law in 2003. The rate includes both intentional and accidental deaths.

But in 2003, Republicans gained the majority in the House and the Senate. And that year, they successfully passed a “right to carry” law that required sheriffs to issue a concealed carry permit if gun owners take a firearms safety course and pass a background check.

Four years later, Missouri repealed the requirement to have a license and pass a background check before purchasing a handgun. Gun homicides in Missouri increased by 25% in the three years following the repeal of the law — from 2008 to 2010, according to a report through the Johns Hopkins Center for Gun Policy and Research.

In 2016, Republicans were able to override then-Gov. Jay Nixon’s veto to allow Missourians 19 and older to carry concealed guns without a permit. The legislature also passed a “stand your ground” law that same year.

Local officers who attempt to enforce the federal firearms laws could be “permanently ineligible” from serving in Missouri and on the hook for potential court costs and fines.

Both May and Jones said the law has them worried because it makes it harder for local law enforcement and federal agents to work together.

“They shouldn’t go to work worrying about whether they are going to be penalized for doing their job,” May said.

“It is a preventable public health crisis,” Bush said. “Republican lawmakers especially, we need you to step up. We need you to join us in taking action on this gun violence crisis in this country. And if it means stepping away from the dollars you receive, you need to do so.”

Bush is hosting an in-person town hall on Thursday in St. Louis to discuss bullying, gun violence and school safety. It will be held at 6 p.m. at St. Louis Community College – Florissant Valley.

Congressman Jamaal Bowman, D-New York, who is vice chair of the House Committee on Education and Labor, will be participating in the panel, Bush said, along with students, advocates and school officials.