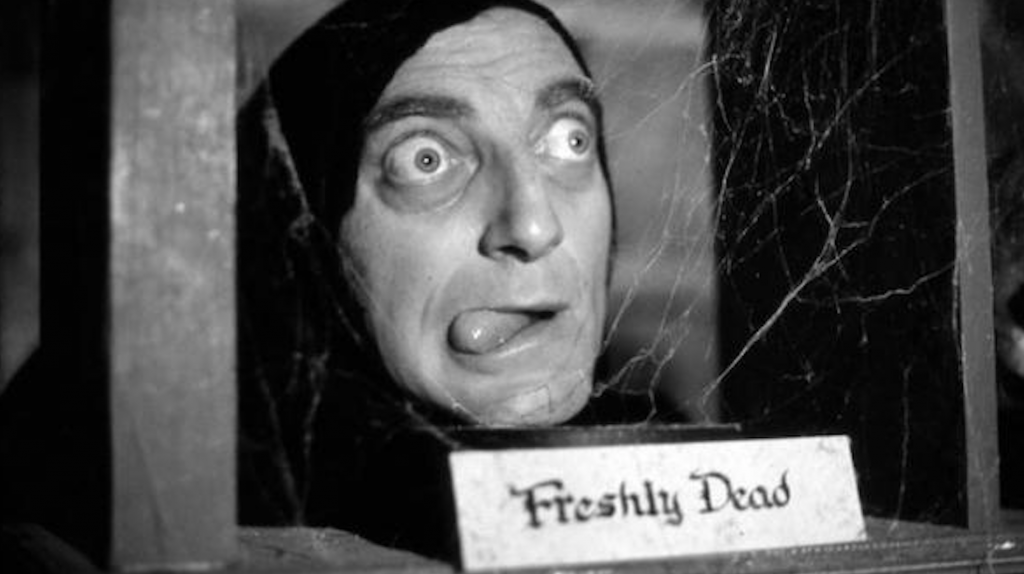 I saw Young Frankenstein way before I ever saw the movie it’s making fun of. My father didn’t believe in the idea of “children’s movies” so I spent my childhood sitting on the couch next to him being exposed to everything from a Nazi’s face melting off in Indiana Jones, bloody docu-dramas about the French Revolution, and whatever the hell is happening in 2001: A Space Odyssey. He had the remote control and no six year-old was going to convince him to change the channel from weekend b-movie horror marathons so she could watch Rugrats. Other kids would have been bored and left to play in another room but I was fascinated by all the films I got to watch. I’ve grown up to be an old movie expert in my father’s image. I’m like a less classy TCM host who can’t help but talk about their favorites to anyone who will listen. The movie that captivated me the most, that I wanted to watch over and over again, was Young Frankenstein.

There is not one second of Young Frankenstein that isn’t filled with some of the sharpest comedy writing in perhaps all of film. You can tell how much genuine love went into that movie, even down to the sets they reused from the actual film they were making fun of (1931’s Frankenstein from Universal Pictures). It’s infinitely quotable, mixing both Mel Brooks and Gene Wilder’s genius and with a cast of comedy actors at the very top of their game. I have spent my whole life watching Mel Brooks movies and Young Frankenstein blows the others out of the water (I’m sorry Blazing Saddles but you can’t compare with “Puttin’ On The Ritz”). Gene Wilder is at his most unhinged in this film; curly hair wild and untamed, grin rictus, voice shrill. He’s a sensation but he’s not even the best character on screen! The film is immediately stolen from him the second Marty Feldman shows up as the unflappable Igor, demanding to know why his name is “Fronkstein” but not “Froderck” and then cheekily saying his name is pronounced “Eye-gor”. His mischievous “what hump?” response to Wilder saying he could help him cements him as one of the comedy greats of the era. Add in the stunning Teri Garr as Inga, the cheerful lab assistant, Cloris Leachman as the sinister Frau Blücher (horses whinny in distance), and Peter Boyle as the titular monster and you have all the ingredients for pure comedy perfection.

The story is deviously simple. Wilder is Victor Frankenstein’s grandson, an accomplished doctor in his own right, who thinks his famous family member was a total kook. He learns he’s inherited the old family castle and travels to Transylvania to sort out the estate. While there he finds his grandfather’s research, does a slight bit of graverobbing, and creates his own monstrous creature. Villagers attack him with pitchforks and torches, there’s a snappy dance number, you know, the usual gothic horror tropes. What would have been boring and overworked in any other director’s hands becomes a work of sheer ridiculous, absurd joy that is quintessentially Brooks. The film idea itself came from Wilder, who co-wrote the script with Brooks, and together the two of them made a film that has stood the test of time. The cast had such a good timing filming it that Brooks kept adding extra scenes just so everyone could keep hanging out together. This cohesion is evident in the film, everyone looks like they are having the time of their lives while the cameras are rolling.

What makes Young Frankenstein so funny? Apart from a comedy pedigree that would make even the worst movie funny (seriously, Mel Brooks is a sick man, and I love him for it), you can tell everyone involved did their homework. It’s a perfect send-up of the Universal monster movies of the 30s which solidified how Dracula, Frankenstein, and the Mummy would look and act for decades to come. Brooks went to great lengths to make sure it was filmed in black and white, with all the old 30s makeup tricks and special effects of the time period. Despite the old fashioned filming methods, the jokes are modern (for the 70s, of course). They straddle a fine line between dirty, low brow laughs, outrageous visual gags, and witty asides that can make you laugh so hard you get hiccups. I envy the people who went into it cold back when it was first released. Classic lines that I know like the back of my hand must have taken them all by such surprise. I’m shocked people didn’t pass out from laughing. Young Frankenstein hits the ground running with jokes and never lets up.

I know there are modern comedies that people point to as the funniest film ever. Everyone is entitled to their opinion (even if they’re wrong). I’ve often had a friend tell me they think The Hangover is the pinnacle of human comedic achievement but, when pressed, admit they haven’t seen a comedy that wasn’t made in the past decade. I love old movies and I’m always trying to get people to watch more of them so that they don’t disappear into the mists of pop culture memory. So many people think black and white films are boringly old fashioned but Young Frankenstein stands the test of time. The jokes are still sharp and the acting is top-notch. It’s a crime to dismiss it because it’s an older film.

Young Frankenstein made a huge mark on my personal lexicon. I quote it almost daily and I’m dismayed by how many people don’t recognize it. I’ve lost more DVD copies of the film than I care to think about, all loaned out with fervent demands for a friend to watch it immediately. My father and I can quote it back and forth to each other like we’re performing a very cheap rendition in a community theater. It’s quite possibly the funniest movie in film history and the time could not be more right for you to watch it if you haven’t. Or watch it again if you’ve already seen it. It’s a film that rewards rewatching, the jokes fly by so fast it’s easy to miss some of them. It’s the perfect spooky comedy for October though I think it’s perfect for all seasons. Time to dim the lights, grab some Halloween candy, and learn all about Abby Normal, sedatives, schwanzstückes, and why you should always “walk this way”. Trust me, you’ll think it’s the funniest movie ever made too or my name isn’t Fronkenstein!

If you needed one last reason to love Mr. Brooks, well…

My father, @MelBrooks, is 94. He has never made a political video. Until now. #MelBrooks4JoeBiden#BidenHarris#GrassrootsDemHQ pic.twitter.com/yQZhopSbNV