Spirit of 72: A new documentary about Kansas City’s music scene is asking for subsistence 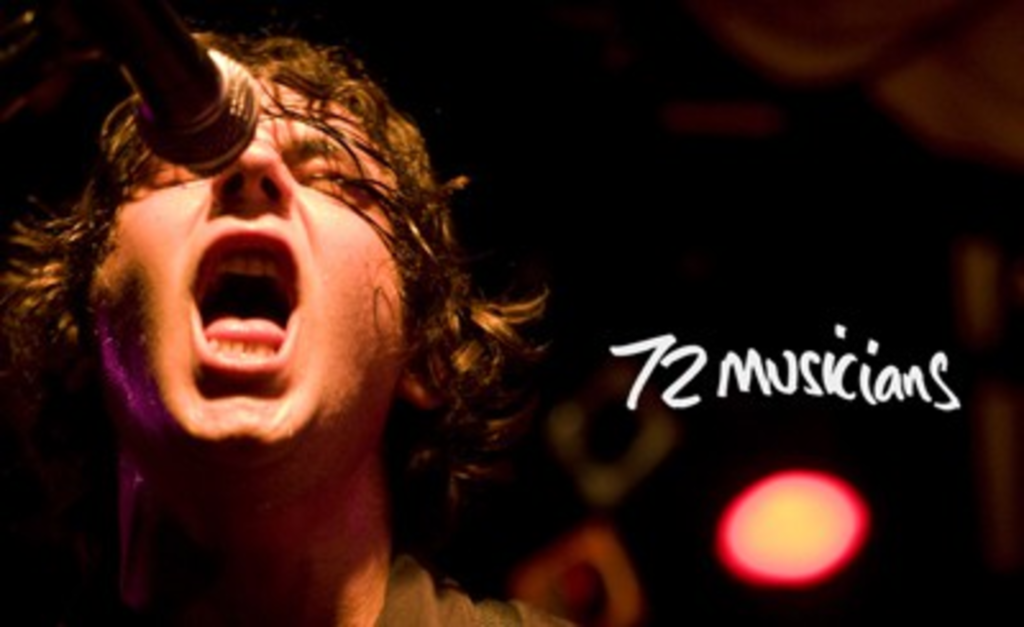 A camera zeros in on Mike Tuley at the mic. He’s dressed up like a punk-rock karate instructor in a white coat, with a headband tied around his ‘fro and his guitar strapped on. He leads his band, Ad Astra Per Aspera, in a kung-fu razor assault.

He sings it over and over until the words are mangled in a full-throated shriek as the band flails into a crazy-fisted climax.

Bob Moczydlowsky‘s new film, 72 Musicians, is full of telling moments. Like a microscope hovering over a pinhead to expose a multitude of dancing angels, it focuses on 20 bands playing over one weekend (in February 2007) at one venue (the Record Bar). Juxtaposing live scenes with interview footage of musicians from around the city, the film takes an epic look at a tiny moment.

Two and a half years later, so much has changed.

There’s glorious concert footage of White Whale, a band led by Matt Suggs (ex-Butterglory) and Rob Pope (formerly of the Get Up Kids, now with Spoon) that had an enchanting debut album out on Merge Records and was poised to blow onto the national scene. Where are they now?

There’s also Be/Non rocking a frenzied breakdown from a record that ended up getting shelved, with a lineup that no longer exists. Similarly, the Architects tear up “Don’t Call It a Ghetto” with a guitarist who has since left and now fronts his own band.

Not that most of the people who see 72 Musicians will know whose stories they are watching.

Though the sounds and the people are distinctly KC-Lawrence, the storytelling is anonymous. Moczydlowsky and his crew instructed their subjects to drop no names, mention no places. Without knowing their identities, we know only their hopes and their fears, the sacrifices, the triumphs, the failures, the drugs, life on the road, getting signed, getting dropped, day jobs that must be kept and dogs that must be fed.

Documentaries deal in specificity. This film offers a history with the names scraped out. It’s a strange and exciting approach.

Most, if not all, of the people who gathered for a debut screening at Screenland Theatre knew a good deal of the film’s titular cadre. It’s got suspects usual and surprising. Passionate raconteurs Allen Epley of the Life and Times, Brandon Phillips of the Architects and Megan Hamilton of the late Frogpond (Hamilton co-owns OxBlood Records with Robert Moore, also an interviewee, and OxBlood was presenting the concert that February weekend) and rapper Mac Lethal are given lots of face time.

Out of left field come bearded folksman and Rural Grit All-Star Mark Smeltzer to talk about how musicians love order, and American Catastrophe guitarist Terrence Moore, who reveals — during a segment on family statistics — that he served as a sperm donor for a lesbian relative’s partner.

Almost everyone has known disappointment. Perhaps a couple of younger members of the Republic Tigers — then only just getting their stage legs — seem not to have had their eye-stars clopped out by some kind of failure. (And even those Tigers seem wary as hell.)

These musicians, to borrow from Epley’s interview, are “in the middle.” Not famous but not unheard of, and driven by equal parts inspiration and compulsion, most of them will never make it anywhere near the rock dreamland of fancy tour buses, label-sponsored cocaine and arenas spilling with fans.

The film 72 Musicians won’t be of much interest to people who insist on consuming their music through MTV and commercial radio. However, if any such types wind up at a screening (such as in September at the Kansas International Film Festival), they’ll have to be coldhearted Visigoths not to be intrigued.

Not to mention rocked. The film’s sound, recorded live and mixed by Duane Trower, is full and brilliant. It combines with fluid, dynamic, close-up-heavy camerawork by Jason Cantu and associates to make pretty much all the film’s players look and sound like badasses.

Whether this noble, high-concept experiment will work depends on how audiences unfamiliar with the film’s subjects react to 72 Musicians‘ lack of identifying information.

But when I imagine this template applied to the music scenes in other cities — whether Little Rock, Iowa City or Reykjavik — I can’t imagine it not being compelling, as long as the music is as good as our homegrown sounds.

These musicians are everywhere, after all, and they’ll keep asking for subsistence.