The Missouri Public Service Commission issued the results of its investigation last month but opted against filing a complaint against Spire. 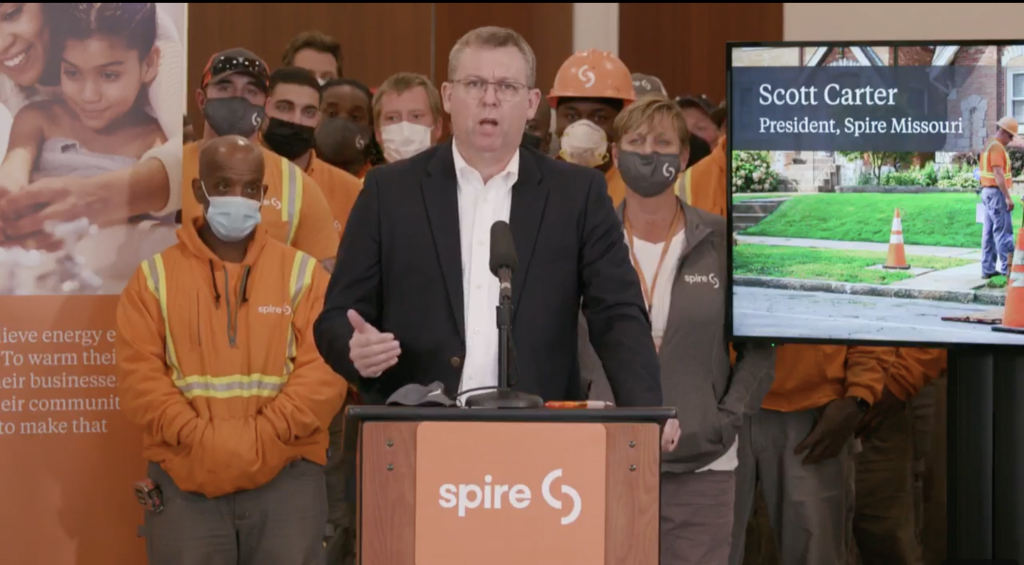 Spire Missouri’s warnings that St. Louis customers could be left without heat this winter if the company’s affiliated pipeline shut down were misleading, left out key context, and heightened public panic, an investigation by state regulators concluded.

But staff of the Missouri Public Service Commission won’t pursue a complaint against the natural gas utility because there was not “substantial evidence” indicating that Spire deliberately disseminated false or misleading information to the public.

The report, issued last month and first reported by the St. Louis Post-Dispatch, said Spire “created unnecessary panic and confusion” and used its communications to mobilize public opinion to support the embattled pipeline instead of educating customers about the true level of risk to natural gas service. It came in the wake of heavy criticism leveled against Spire for warning of potential dire consequences if the pipeline were ordered to cease operations after a federal court struck down its approval last summer.

“We want to keep you informed and prepared for potential natural gas disruptions — and outages — this winter if the pipeline is not kept in service,” Spire said in an email to St. Louis customers in November, blaming a “New York-based environmental group” that challenged the pipeline in court.

In a July press release, Spire warned loss of the pipeline and potential “mass gas service outage during the winter could result in loss of life and property similar to that seen in Texas” during extreme cold in February 2021, a statement PSC staff said would unnecessarily heighten customers’ concerns.

Spire’s spokesman, Jason Merrill, said in a statement the company welcomed the opportunity to work with the PSC staff, though it said in a filling that it was “perplexed” that staff would refer to its communications as potentially false or misleading.

Merrill maintained that the company has a responsibility to inform customers about potential impacts to their service. He emphasized the PSC’s conclusion that there was not enough evidence to conclude that Spire deliberately developed a plan to disseminate false or misleading information.

“We care very much about the wellbeing of our communities and we will continue to do what’s right for our customers,” Merrill said.

Michael Berg, political director for the Missouri Chapter of the Sierra Club, criticized the PSC decision in a statement. The state chapter joined the national Environmental Defense Fund in lambasting Spire’s messaging last fall and resulting threats to EDF’s staff.

“The PSC decision is unfortunate because it sends a signal to Spire and other utilities it regulates that they can engage in tactics meant to instill fear and anger — leading to death threats this time around with the potential for more harm next time,” Berg said.

Spire’s pipeline has been operational since 2019, transporting gas from Illinois into the St. Louis area. But its certificate to operate, issued by the Federal Energy Regulatory Commission, was struck down last summer by a panel of the U.S. Court of Appeals for the D.C. Circuit, saying that FERC ignored evidence Spire was engaging in self dealing. The certificate was remanded back to FERC to review again.

The decision came in a challenge by the Environmental Defense Fund, the nonprofit Spire later targeted in its messaging, resulting, EDF said last fall, in threatening messages directed at its staff.

Spire announced its intent to build a pipeline in the St. Louis area in 2016 and invited natural gas shippers to contract for the gas the pipeline would transport, but none committed.

Under the Natural Gas Act, for FERC to issue a pipeline certificate, it must find that the pipeline “is or will be required by the present or future public convenience and necessity.”

But Spire STL Pipeline and Spire Missouri, which are affiliates, entered a contract for 87.5% of the pipeline’s capacity, which the court said was “plausible evidence of self-dealing.”

FERC granted the certificate anyway in 2018 and denied EDF’s request for a rehearing. EDF has, among its members, St. Louis area landowners who lost property to the pipeline.

The nonprofit appealed FERC’s approval in early 2020, saying the agency had not rigorously studied the need for the pipeline. The appeals court sided with EDF and vacated FERC’s certificate.

In September, FERC granted Spire a 90-day certificate to allow it to keep operating the pipeline in the interim.

But that certificate was set to expire in mid-December just ahead of the coldest portions of the year. As the deadline approached, Spire began its campaign of warning customers of potential outages.

Its November email to customers warning of potential outages and blaming a “New York-based environmental group” kicked off a public feud between Spire and EDF over the utility’s messaging. EDF and some local lawmakers in St. Louis called Spire’s claims a “manufactured crisis.” And EDF demanded the utility cease and desist its “false and defamatory” claims.

In addition to the email, Spire set up a webpage — spireenergy.com/critical — with a video warning of “serious service disruptions” and directing customers to submit supportive comments to FERC as it weighed the pipeline’s future.

The pipeline company told news outlets that without the pipeline, as many as 175,000 Spire customers would be at risk of losing service when temperatures dip below 9 degrees. At that point, the utility would have to pull from its reserves. If it had to deplete reserves completely, the company said, service for as many as 400,000 customers could become unreliable at temperatures as warm as 38 degrees.

While short natural gas supply brought energy and gas providers in parts of the Midwest to the brink and wreaked havoc in Texas in February 2021, Spire argued its pipeline spared St. Louis customers a similar fate.

But warnings from Spire, PSC staff said, failed to acknowledge that it was highly unlikely that FERC would let the certificate expire without taking action to ensure St. Louis residents had access to heat this winter.

The PSC launched its investigation into Spire’s communications in mid-November, saying Spire’s messages “appear to reflect an attempt by Spire to mobilize public opinion, through fear, in order to potentially pressure federal authorities.”

“It was always highly unlikely that the FERC would take no action to extend the Spire STL Pipeline’s certificate when taking into account possible threats to customers’ life and health from an extended gas outage,” the PSC wrote in its report. “A statement to that effect from Spire would have furthered Spire’s stated goal of keeping their customer base informed, while mitigating the anxiety that comes with the unknown.”

Merrill maintained in the company’s statement Monday that “there were absolutely no assurances a temporary certificate would be granted to the Spire STL Pipeline and it was crucial to keep customers informed of the possibility of lost service.”

The pipeline was granted an extension in December while FERC works to determine its long-term fate.