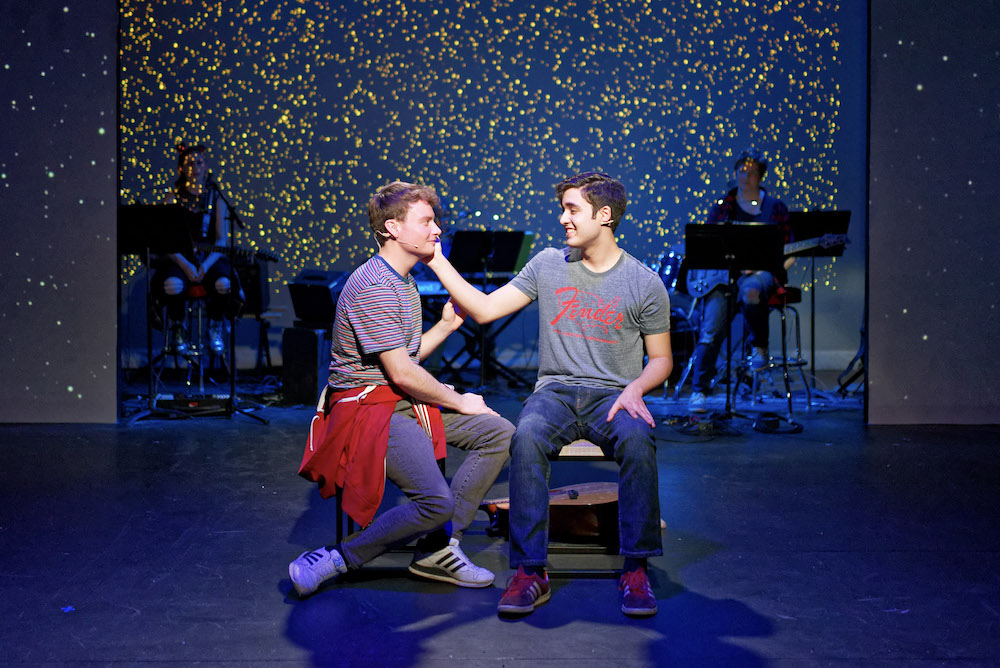 Coming out, or living out, in early-1990s Nebraska was no summer picnic. Spinning Tree Theatre’s Girlfriend, on the other hand, is a refreshing respite, a joyful and touching look at the tentative early stages of a relationship between two young men there in 1993.

It’s summer, that specific transitional season between high school and college or, perhaps, the working life. For newly graduated Will (Dakotta Hagar), it means freedom. Every lawn now seems freshly cut—“This is what the world will now smell like,” he says, “every day.” Directed by Spinning Tree artistic director Michael Grayman-Parkhurst, Girlfriend (book by Todd Almond, music and lyrics by Matthew Sweet) envelops us in that anticipatory and heady time.

The musical (which premiered in 2010) resides in a small town in the more rural, far-west side of the state. Will pretty much knows who he is, if not yet where he’s going. He has a sudden new friend in Mike (Jeremy Ragland), the prom king and school jock, who’s never spoken to him until senior year’s final week.

“I thought I was the only one like me in Nebraska,” Will says. Mike apparently has a girlfriend, but he calls Will to go to the drive-in movie—I’ve been waiting / And I want to—night after night.

Almond’s narrative, infused with an abundance of humor and charm and the teenage characters’ conversational flounderings, inserts Sweet’s songs, most from the 1991 Girlfriend release. It’s a balanced mix of dialogue and music, the storytelling augmented by Sweet’s power-pop compositions.

The excellent Ragland and Hagar comprise the intimate play’s small cast, and each actor’s engaging stage presence only intensifies over the 80-minute show (performed without intermission). Ragland’s Mike and Hagar’s Will own their awkwardness as they explore the territory of each other’s company and take those first courtship steps. 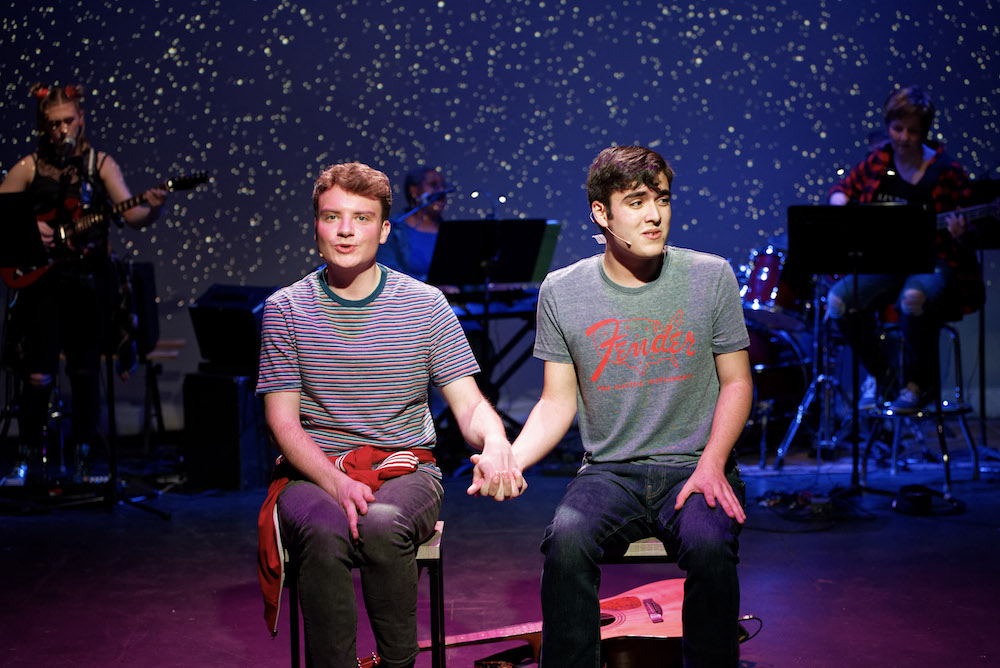 Hagar, whose portrayal of Will is funny, touching and sensitive, has been spending considerably more time offstage than on while pursuing a master’s in theater history and dramatic literature (according to the show’s program). He might consider getting out of class more often. Ragland, too, is first-rate. In an agile performance, his Mike tightropes between who he outwardly represents and who he inwardly may be, while also confronting parental and peer expectations. Together, the actors’ rapport and distinct harmonies are keenly in-sync (and are especially moving in “Sweet Voice”).

At times, Ragland ably takes up the acoustic guitar (“I’ve Been Waiting,” “Reaching Out,” “We’re the Same”), playing solo and with the show’s band, which includes music director and keyboardist Pamela Baskin-Watson, guitarist Darcie A. Hingula, bass player Kelly Crane and drummer Caitlyn Henson. The group smoothly shifts among ballads, pop-rock melodies and background accompaniment. Hingula and Watson (who perform a duet on “You Don’t Love Me”) sing backup.

Multiple scenes traverse a variety of indoor and outdoor locations, the transformations eased by the simplicity of the set, composed of movable twin beds on each side of the stage (properties by Eric Palmquist), and an enormous background screen for digital projections (design by Conor Tierney). The moving visuals place us with Will and Mike at the drive-in movie, driving out on a country road, and bathed in moonlight beneath the stars of a nighttime sky (lighting by Rachael Carney).

Spinning Tree’s captivating production of Girlfriend is earnest, sweet and humor-filled, a relatable and ultimately uplifting story of a young same-sex couple uneasily navigating love in a challenging place.

Girlfriend is accessible to deaf and hard of hearing audiences at all Spinning Tree performances Wednesday, January 29-Sunday, February 2, with ASL shadow interpreting by certified signers Lisa Lehnen and Juliana Ladd. This type of signing places interpreters in the action, rather than off to the side.