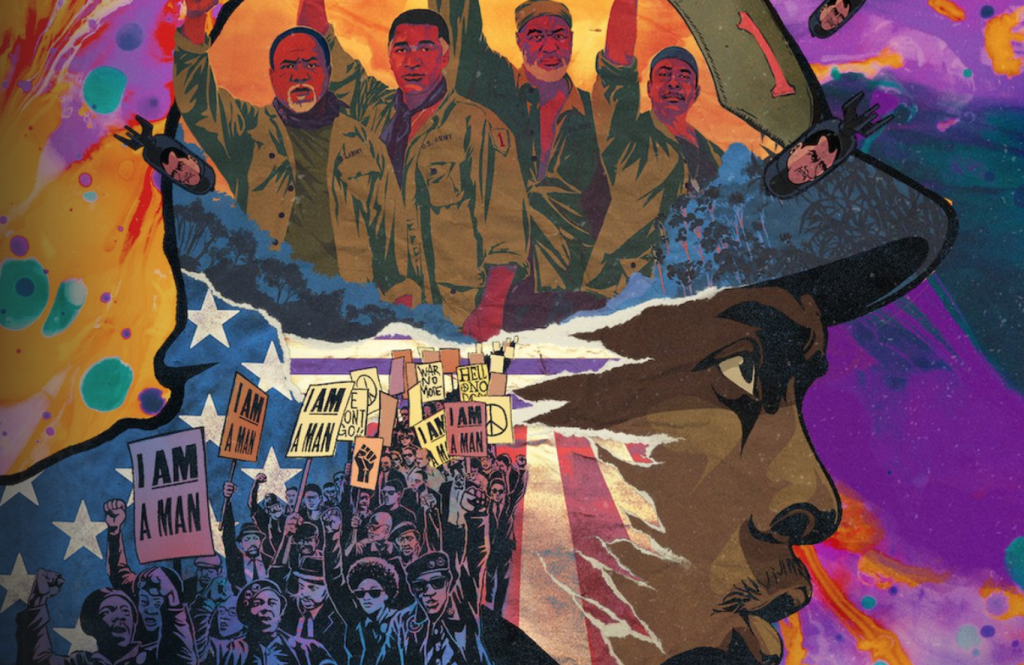 Spike Lee’s Da 5 Bloods, out this weekend on Netflix, is a movie with a lot to say, and a massive, 154-minute platform from which to shout it. Whether the movie suffers under the weight of all its competing themes is the question up for debate. Lee’s Vietnam war epic (co-scripted with Lawrence filmmaker and BlacKkKlansman co-writer Kevin Willmott) feels overstuffed, but you’d be hard-pressed to pick which of its messages to pull focus from. They’re all worthwhile, as is the film as a

Da 5 Bloods follows a group of Vietnam vets, the Bloods (Clarke Peters, Delroy Lindo, Norm Lewis, and Isiah Whitlock Jr.), who reunite in Ho Chi Minh, decades after the end of the war, to take care of some unfinished business. They’ve returned to recover the remains of their former commander, Stormin’ Norman (played in flashback by Black Panther’s Chadwick Boseman), as well as a case of CIA gold—originally meant as under-the-table payment to anti-Viet Cong guerillas—that they buried during the war. 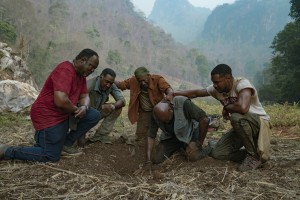 The men each struggle with the long-term effects of their war experience, but Lindo’s Paul is the most haunted. Having experienced a life full of tragedy, he’s taken the stance that what’s his is his. To that end, he shows up in Ho Chi Minh with a MAGA hat and a Texas-sized case of unresolved PTSD. Paul’s son David (Jonathan Majors), concerned for his father’s mental health, follows his dad to Vietnam and tags along with the group to keep tabs on Paul. 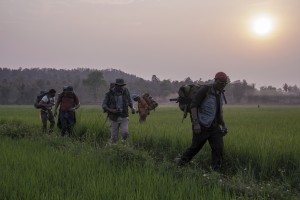 Lee also intermittently cuts to Vietnam-era flashbacks showing the Bloods’ interactions with Norman, their beloved leader and brother-in-arms, whose death leaves them feeling bereft, guilt-ridden, and undirected. Described by Peters’ Otis as “our Malcolm and our Martin,” Norman is meant to evoke the loss of black leaders, fathers and father figures, while also paying tribute to the under-recognized sacrifice of black soldiers during the war. Norman’s death weighs especially heavy on Paul, who’s turned to the corrupting rhetoric of Trumpism in his search for something—anything—to make him feel empowered the way his commander did.

Da 5 Bloods is its strongest once the men depart for the jungle and find their hidden cache of gold. At this point, it becomes a parallel to John Huston’s classic The Treasure of the Sierra Madre, with Paul as the film’s fascinating analog to Humphrey Bogart’s weary, paranoid Fred C. Dobbs. Lindo, always a strong performer, is a powerhouse here, giving a career-best performance that’s alternately villainous and sympathetic.

The movie’s many competing themes (in addition to the black experience in Vietnam and generational loss, it addresses the evils of colonialism, the long-term effects of the war on the Vietnamese, and the Black Lives Matter movement) do overwhelm the dramatic structure of the film and create some inconsistent character moments. It also creates several under-developed sub-plots. But however sprawling the movie is, it’s still impressively ambitious. While its many ideas and moments of visual symbolism don’t always come across effectively, they’re always points worth making. 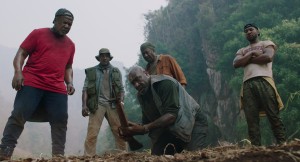 There are enough competing movies in Da 5 Bloods to create a mini-series, and putting them all together creates more of a pastiche than it does a film. But what a pastiche it is. Even at its most inconsistent, Lee’s film remains compelling, with excellent performances, and timely observations that pull together the past and the present. The ride is long, and occasionally bewildering, but worth it.