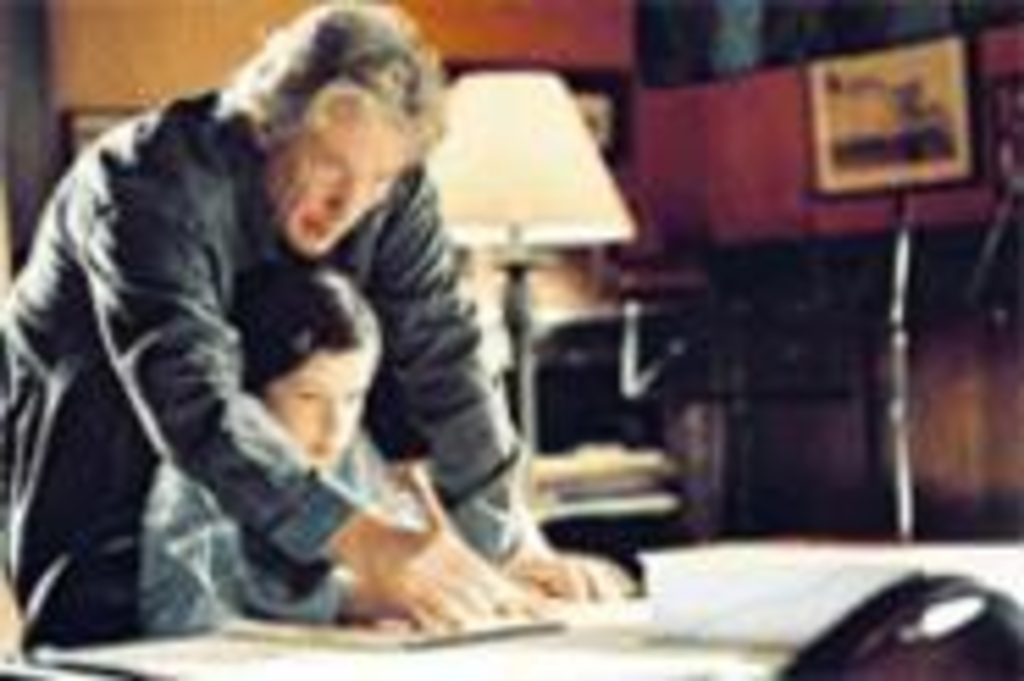 Richard Gere? Mr. Salt-and-Pepper-Sexy-Buddhist-Wasp plays Saul Naumann in Bee Season, the film version of Myla Goldberg’s best-selling novel. In the book, Saul is an oppressive and learned Jewish patriarch, a cantor and a student of mysticism whose text-strewn home office is off-limits except by invitation. Saul is the type who is so busy seeking a relationship with God through ancient Jewish mysticism — that is, through numerology, the permutation of letters in a given word, meditative attempts to gain a direct route to God’s ear — that he forgets to notice the souls of his own children. Richard Gere?

Equally mystifying, Saul’s wife, Miriam, is played by Juliette Binoche. Screenwriter Naomi Foner Gyllenhaal (mother to Maggie and Jake) must not have been able to believe her as Jewish, either. Here, Miriam is French-Catholic; she apparently was attracted to Saul because of his connection to kabbalah. She loves its mystery.

Here, Saul is no cantor — the film employs him as a religious-studies professor who wears tight jeans. This and other changes make Bee Season far less Jewish than the novel, which is a strain; spirituality is summarily reduced to a series of shallow metaphors. But the real problem is that, despite some rather nuanced emotional complexity in the relationships among its characters, Bee Season cannot control its desire to overplay all of those metaphors.

Sixth-grader Eliza Naumann (newcomer Flora Cross) lives with her parents and favored older brother, Aaron (Max Minghella, son of director Anthony, giving a fresh performance that pops with energy that the other characters seem to drain), in a beautiful home in the Oakland hills. With its burnished wood walls, the home is meant to stand for both solidity and gravity: Here is a serious family engaged in noble pursuits. But that image unravels when we see that Saul shares a bond with Aaron that doesn’t admit Eliza, and that Miriam, apparently employed in the sciences, is driven to distraction by personal demons.

Family dynamics begin to shift when Eliza, a shy girl who understands her place as both the second child and the second sex, reveals a talent for spelling. Saul takes her into his office for lessons, brushing aside Aaron and his violin. Part of what’s so interesting about the book (but not, unfortunately, the film, which treats the matter only glancingly) is that Saul uses kabbalah to teach spelling. First he shows Eliza how to reach into the history of a word, its etymology, and sense its letters; later he turns to increasingly esoteric forms of meditation to help her divine orthography. As these lessons progress, so does Eliza, winning the regional and state bees and heading for the nationals in Washington.

A central image in Jewish mysticism is one of a broken world, a series of vessels shattered into shards. The idea of tikkun olam, or repairing the world, is that humans can piece the world together again. Saul is obsessed with this concept, and so is the movie: Saul believes that he’s on a mending path, and he speaks of little else. Directors Scott McGehee and David Siegel milk this image within an inch of its life. There are constant visual references, including a kaleidoscope and a pair of shattered eyeglasses that get some sort of play in nearly every scene. Worse, the directors constantly refer one thing to another; if a character speaks of shards, we get a shot of the eyeglasses.

Unlike the book, the film is much less about Eliza than about the family. Eliza’s perspective, her desperate quest to please and connect with either parent, is the beating heart of the novel. Here that quest is all but hidden behind her pale and silent face. This shift creates additional problems, such as an ending that has been transposed to mean its opposite. Whereas once Eliza made a definitive step away from her parents and into herself, now she makes a gesture that seems to rescue her utterly unrescuable family. Healing the world? Hardly.