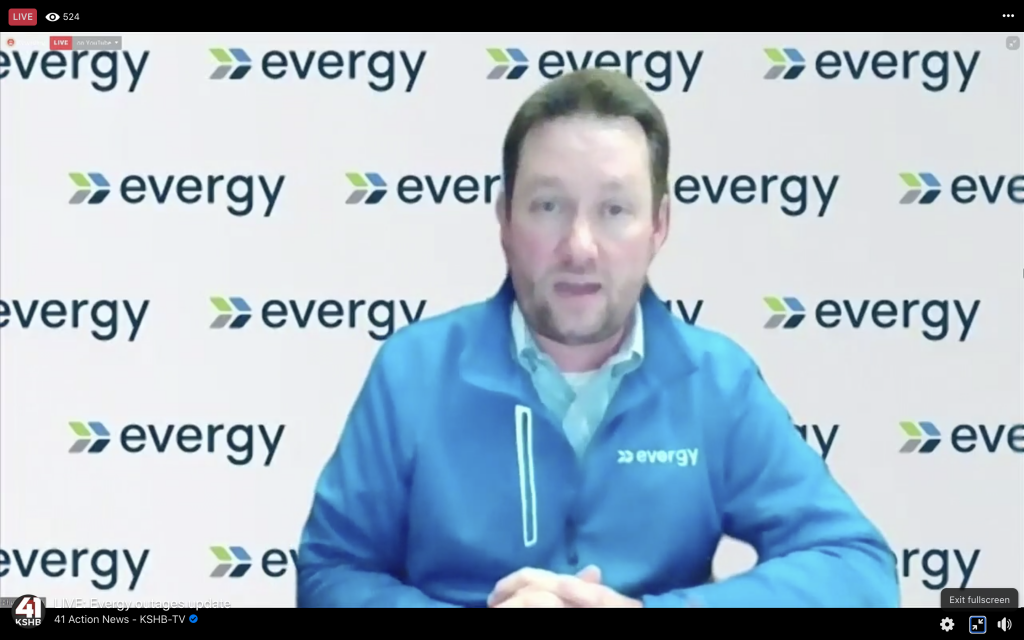 Evergy customers in Kansas City can expect possible additional outages between 8 p.m. tonight and tomorrow morning, according to an update from Evergy officials at 4 p.m.

Senior Vice President Chuck Caisley gave an update live on Facebook Tuesday over the status of power outages in Evergy’s customers in the region. Caisley asks customers of the Southwest Power Pool to continue conserving power by turning down thermostats and minimizing appliance use this evening.

Caisley says these outages are more of a danger in extreme cold than in extreme heat for a variety of reasons, such as the availability of natural gas and its increased use in the winter to heat homes.

“The availability of natural gas as a fuel becomes constrained because everybody is trying to access it all at the same time,” Caisley says. “We’re having a weather event meteorologists say we haven’t seen in 85 years across the Midwest. We just simply haven’t seen weather of this extended duration that is this cold for a long time, so that is what’s causing the peak and supply issues in the Southwest Power Pool.”

Rolling power outages in the Southwest Power Pool began yesterday, but many of today’s outages in the area reportedly lasted longer than yesterday’s typical 30 to 60-minute duration. Caisley says Evergy will work to ensure that electricity prices don’t rise as a result of outages.

“It is true that fuel prices are higher,” Saisley says. “But when it comes to the increased cost as a result of this, what we will ultimately do is work with regulators to talk about what those costs are and then work very hard to spread those costs out over a longer period of time so that people don’t experience a price spike.”

As of 4 p.m., Caisley says most customers who experienced temporary outages have had their power restored, leaving less than 1% of customers with outages.

“What I would tell folks is that the grid continues to be operating under extreme duress,” Caisley says. “Power plants are still working as hard as they can. There’s still ice on all the lines and equipment and there’s just a higher failure rate. It just takes a little more time in conditions like this to get everybody restored.”