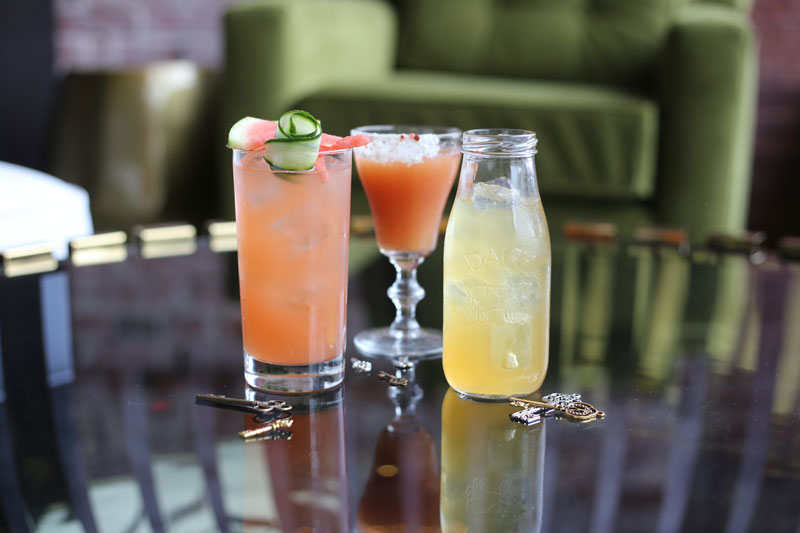 When I first met Erik Mariscal, a year and a half ago — when he was still the bar manager at Local Pig Westport, may it rest in peace — he told me his dream: opening a tiki bar in Kansas City. It was a fantasy he happily reiterated each time I saw him after that, whenever I asked him what he might do next..

Mariscal this week opened a new bar, at 1521 Grand. It is called SoT, and it is definitely not a tiki joint.

SoT (as in: South of Truman Road; the water carafes all feature Harry Truman’s face) goes not for a Tahitian look but is instead sophisticated, with a funky, punk-rock-meets-Great Gatsby interior. And yet, Mariscal says that, for the first time since his move to Kansas City from Oakland, California, in 2014, he feels totally at home.

Of course, it’s been a long time coming. After Local Pig, Mariscal briefly landed at the Jacobson, then opened the Homesteader Café before taking on bar-manager duties at 801 Fish in Leawood. His tenure at SoT, he says, began as a consulting gig for owner Ron Berg — local photographer and owner of the Berg Event Space, located just above SoT in the same building.

“Ron described it as gritty glam, and I didn’t know what that really meant,” Mariscal tells me. “But I could see it coming together. I started thinking about cocktails, and I wanted to do things that were a little more obscure. I wanted to throw in a touch of molecular gastronomy into cocktails, but in an unpretentious way — it already sounds so pretentious that I wanted to be able to get creative like that without turning people off.”

So he decided he wanted to make SoT his main gig.

“After a while, I was like: Wait, wow, I can make this home and make a cool addition to the Crossroads,” Mariscal says. “So I came on and decided I was going to go full bore with a really awesome concept. This will probably be the last stop for me, as far as bartending in Kansas City. I think I’ll be here for a long time.”

There’s an old-fashioned key motif throughout the bar, and it’s not the only vintage touch. “Ron likes old-school things,” Mariscal tells me, gesturing to an armoire filled with antique decanters. Warm brass lighting fixtures hang over the swanky marble bar here, and the seating is all plush jewel tones. A spray-painted chandelier adorns the brick wall behind the bar, and massive wallpaper art flows through the room. A neon sign helpfully reminds guests: “You are here.” And there’s a patio, which SoT shares with the event space.

SoT’s kitchen is no more than a closet, but chef Mark Dandurand — formerly of Local Pig Westport — is readying a promising list of elegant-sounding bites (hello, crawfish toast).

But I’ve come to visit Mariscal for the usual reason: a drink.

Most of the 12 or so cocktails on Mariscal’s menu go for $9 to $11. That’s to ensure that drinks like his dirty martini will not be special-occasion-only, despite the fanciness his recipes impart. That dirty martini, for instance, would make James Bond reach for his Walther PPK.

“I usually hate dirty martinis because they use crappy brine,” Mariscal says, “So I came up with this idea for an interactive dirty martini. I’m puréeing castelvetrano olives — a really bright, fresh Spanish olive — and mixing that with olive juice and calcium lactate. I’m freezing that mixture into half-spheres, and then dropping them in a sodium-alginate bath, which forms a membrane around the olive juice. It’s a process called reverse spherification, and I’m basically making kind of like an olive egg.”

The olive egg gets dropped into a martini, and a fancy little metal toothpick is what you use to break the olive; out slides the castelvetrano juice, to be mixed in by the drinker. I dislike dirty martinis for reasons similar to Mariscal’s, but his spin tempts me. He smiles apologetically: There are no science olives prepped for my visit. But he has a few other cocktails he’s ready to show off.

The first drink is a version of something I’ve had before from Mariscal — a clarified-milk punch that he has been toying with for as long as I’ve known him. He infuses gin with dried elderflower, black-tea syrup and toasted macadamia nuts, then washes the infused alcohol with milk. He scalds the milk, curdling the mixture, then strains out the resulting curds. The pale, butter-yellow liquid he pours over ice into a miniature old-fashioned glass milk jug. At SoT, the macadamia nut comes through powerfully, and the elderflower adds more aroma than it does sweetness. There’s a good weight to this cocktail — the liquid isn’t light or thin, but it’s not so big that I couldn’t have one or two more.

Mariscal is inventive with his recipes, but his drink names remain afterthoughts. This one, he tells me, is called simply the Milk Punch. When it sips this easily, he can call it whatever he wants.

Mariscal’s Rhubarb Blue Cheese Cocktail is tequila-based, with a rhubarb-balsamic jam, orange juice and dry curaçao. It’s served up, in a dainty Nick and Nora glass that’s been rimmed with a mix of powdered blue cheese and pink peppercorns. Mariscal says all these flavors go well together. I protest that it sounds like an appetizer, not a cocktail.

Actually, it’s a feast. The cheese dust hits first, tangy and with a filmy texture. This is a brief and fascinating moment on my tongue before the liquid washes it away and I taste a happy basket of fruit. Flavors bounce from sweet to tart to savory. It’s weird, but I like it. I think.

Mariscal next makes me his Carbonated Cocktail, riding the tail of the bottled-cocktail trend that is sweeping through local bars. Here, it’s simply an excuse to keep summer on the shelf just a little longer.

“So this is vodka that’s been infused with watermelon, cucumber and dill,” Mariscal tells me, pouring a pale-pink liquid over ice into a Collins glass. He fashions a rose out of a strip of cucumber and arranges it with two watermelon slices over the top of the glass. There’s just a hint of carbonation. Mariscal wanted to bottle some late-summer flavors, and he did. But more than that, he has bottled the feeling: This is a sipper that belongs on a patio at twilight.

Mariscal smiles. He does seem content here, happy to be in charge of a menu that is truly his own, with like-minded backing. (Berg has purchased a rotary evaporator for the bar, and Mariscal has big plans for it.)

Still, he’s not setting aside his tiki dream entirely. At least one of SoT’s cocktails will be a tiki drink on fire. And chocolatier Christopher Elbow will also show himself on the SoT menu.

“Wouldn’t you know it, he’s got a great passion for tiki as well,” Mariscal says. “Him and I have collaborated a bit together, and he invented two of his own cocktails to go on our list. So really, with this menu, you see a lot of my tiki habits coming out. I told Ron for my passion for tiki, and he’s stoked on it. We’re doing this right now, and maybe something in the future for a tiki bar — it could really happen.”

For now, though, Mariscal is looking forward to his future at SoT. And so am I.