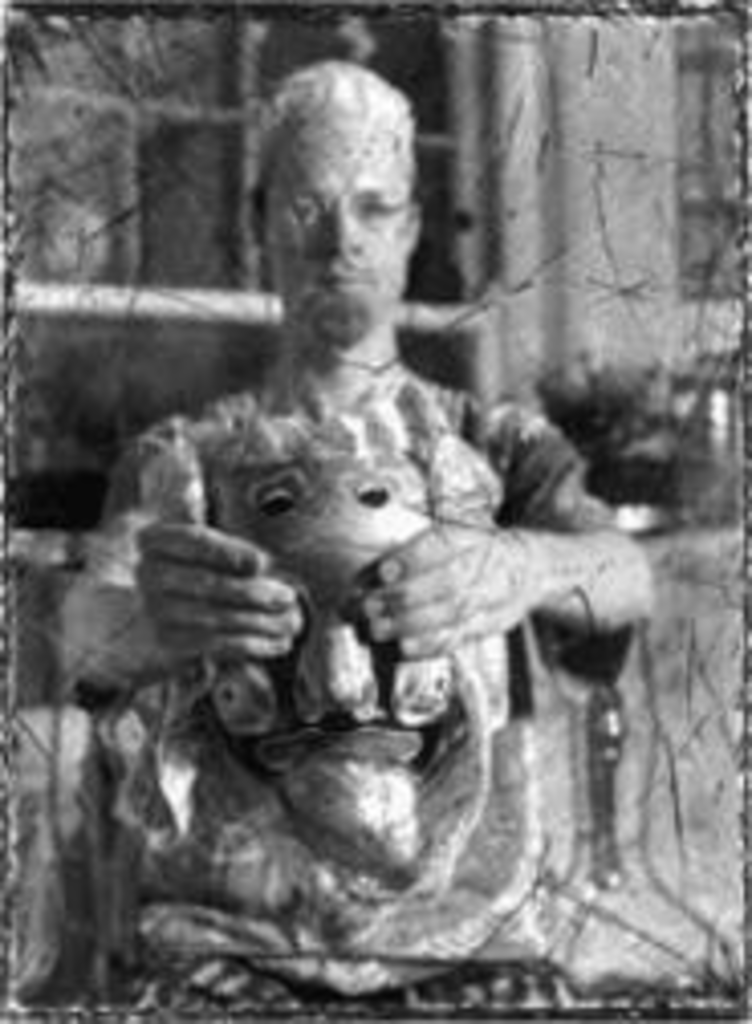 Photographer Frederick Sommer, the subject of an exhibit now at the Nelson-Atkins Museum of Art, combined ordinary elements to produce maximum discomfort. He turned a portrait translucent, setting his subject against a weather-worn wall so that the subject, too, seemed to be decaying. Placing a doll in a dilapidated box, he created a stark scene that resembled a child in a casket. Through Sommer’s unforgiving lens, hints of death and disintegration lurked everywhere. By contrast, Dwight Frizzell turns weapons into musical instruments. As a member of the NewEar Contemporary Chamber Ensemble, he used attack planes’ robust emissions as percussion in his performance piece “Sonic Force.” More recently, he tried to convert the hypothetical detonation of a thermonuclear device into atmospheric noise, contrasting initial orchestral explosions with an ominous, slow-creeping aftermath.

Frizzell’s “A Bridge to Sound: Listening to Sommer” converts Sommer’s evocative imagery into music, mirroring the morbidity of the photographer’s pictures without neglecting their mesmerizing beauty. Coming from a composer who is always open to unorthodox inspiration, this striking translation asserts the media-transcending possibilities of aural accompaniment for art. The speech-and-song presentation starts at 6 p.m. Friday at the Nelson’s Gallery 208 (4525 Oak Street, 816-561-4000). — Andrew Miller

It may be politically risky to say this, but we’ve always felt that the French had their priorities straight. Fashion, food, fine wine: These are causes we support. We’re also talking about a country that celebrates the yearly release of the Beaujolais Nouveau with a big ol’ fête. Because a weak dollar prevents us from heading abroad, we had planned to content ourselves by listening to wine guy George Vesel discuss the wine regions of France at Tuesday’s French Wine School at Le Fou Frog (400 East Fifth Street). Then we heard that the event was already sold out. So until the next class from the Kansas City chapter of the American Institute of Wine and Food, how about taking Vesel’s advice and skipping the beer next time you eat barbecue? Vesel recommends any red Zinfandel or a Syrah to pair with the spicy flavors. See www.aiwfkc.com for more information. — Rebecca Braverman

Junk Male
Ben Hawkins’ art has its roots in recycling.

Grease monkey Ben Hawkins had no interest in pursuing creative endeavors — until a year and a half ago, when suddenly all those gears and plugs sparked his artistic side. “I started with car parts, and it just sort of became an obsession,” he says. Whimsical Rubbish, opening from 7 to 8:30 p.m. Thursday at the Anita B. Gorman Conservation Discovery Center (4750 Troost, 816-759-7300), is the Shawnee native’s first show. Hawkins’ zany, trash-made creatures resemble metal Muppets, their faces depicting emotions such as surprise and fear. The method to Hawkins’ madness? Scouting garage and yard sales, he gathers waffle irons and doorknobs for faces and noses; friends also give him their unwanted auto parts. We imagine that a house cluttered with all of that trash would make the most patient family lose its cool, but Hawkins assures the Pitch that his wife and two sons are down with it. “My sons are really into it [collecting objects], and my wife will grab stuff off the side of the road.” — Megan Metzger

Kids Today …
Take me to your leader.

Where are the leaders in this town? The Kansas City Young Democrats group on Meetup.com has ample interest and a date set for its next gathering — Saturday. But unless an organizer steps up to actually decide a time and place, all those impressionable minds will go unmolded. (We’d do it ourselves, of course, if it weren’t for our prior Meetup obligation with the Dungeons & Dragons crowd.) Check the Web site for details. — Annie Fischer