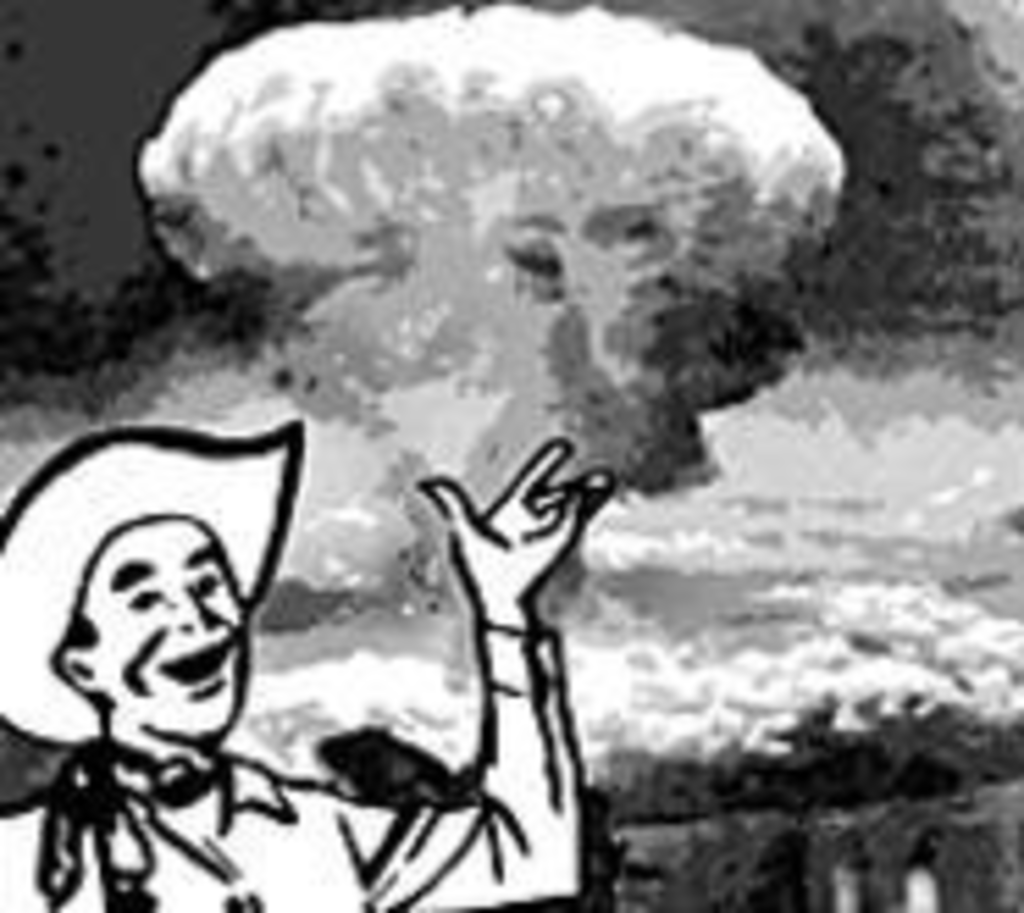 Clearly a lot of time and effort go into selecting the music for Democratic and Republican campaign events. The two camps must have teams of people sitting around long boardroom tables, eating Chinese food and wearing out boomboxes till the wee hours, because nothing is left to chance with these things.

But if that’s true, then how the hell did the Black Eyed Peas make it onto the stage at the Democratic National Convention?

Sure, the ticket’s ubiquitous “Let’s Get It Started” is exuberant, but the original, unsanitized album version of the song is called “Let’s Get Retarded.” Sample lyrics: We got 5 minutes for us to disconnect/From all intellect.

Is that what you call staying on message?

It seems obvious to me that whoever is in charge of such things could use a few tips, so I’ve compiled this list of suggested campaign songs that I’d like to hear blasting as the candidates race toward November 2.

Pros/cons: Yeah, these songs are fun, but they play right into the criticisms leveled against the Dems these days — that they have little bark and even less bite. If Kerry really wants to communicate to voters that he can lead and protect this country, he needs to get tough.

Sample lyrics: Here’s a little somethin’ ’bout a nigga like me/Never shoulda been let out the penitentiary/[John Kerry] would like ta say/That I’m a crazy muthafucka from around the way … This is a gang, and I’m in it/My man [John Edwards]’ll fuck you up in a minute/With a right-left, right-left, you’re toothless/And then you say, ‘Goddamn, they ruthless!‘

Alternate: Kris Kristofferson’s “Don’t Let the Bastards (Get You Down)”

Sample lyrics: And I’ve just got to wonder what my daddy would’ve done/If he’d seen the way they turned his dream around/I’ve got to go by what he told me, try to tell the truth/And stand your ground/Don’t let the bastards get you down.

Pros/cons: This tune may complement the hayseed image Edwards is trying for, but it’s also pretty depressing — I was born in a small town … Probably die in a small town. Come on. If Edwards wants to work the podunk thing and look strong doing it, he should try outlaw country.

Sample lyrics: You’d better move away/You’re standin’ too close to the flame/Once I mess with your mind/Your little heart won’t beat the same.

Pros/cons: Sure, it’s a baby-boomer anthem and all, but watching Clinton suavely and sharply address the DMC reminded us that there’s no better leader than a womanizing, self-effacing pimp daddy who, despite his confessed affluence, can still give every race, color and creed a hard-on.

Suggested replacement: Eminem’s “Without Me”

Sample lyrics: They tried to shut me down on MTV/But it feels so empty without me/So come on and dip, bum on your lips/Fuck that, come on your lips and some on your tits/And get ready/’Cuz this shit’s about to get heavy.

Sample lyrics: These are my confessions/Just when I thought/I said all I can say/My chick on the side/Said she got one on the way.

Pros/cons: This song is a Bush family heirloom, like a lucky pair of poop-stained BVDs passed down through the generations. Daddy Bush used it for his campaign in 1992, Lil’ Bush used it in 2000, and here he is using it again. But if George really wants to win over the undecided swing voters, he needs to think about leveling with us, being honest and telling the truth about what he’s really been up to these past 4 years.

Sample lyrics: Save yourself, serve yourself/World serves its own needs/Listen to your heart bleed/Dummy with the rapture and the reverent in the right — right/You vitriolic, patriotic, slam, fight, bright light, feeling pretty psyched.

Current song: Cheney has no soul, so he cannot hear music. Lately he’s been taking the stage to the sound your TV makes during a test of the Emergency Broadcast System.

Pros/cons: The flat buzz of the EBS signal is representative of Cheney’s public profile — plain yet foreboding, simple yet terrifying. But he can do better.

Suggested replacement: John Williams’ “The Imperial March,” from The Empire Strikes Back

Pros/cons: For better or worse, Arnold’s not quite as demonic as his above-mentioned Republican peers — he can smile, crack jokes and even make fun of himself. But since we all know that Arnold is the devil incarnate, a true Manchurian Candidate plotting his slow ascent to the highest office in the land, where he will engineer our ultimate enslavement by his secretive partners, the International Federation of BodyBuilders (hel-lo — aliens!), it’s my thinking that he should start dropping a few subtle, subversive hints.

Suggested replacement: Cannibal Corpse’s “I Will Kill You”