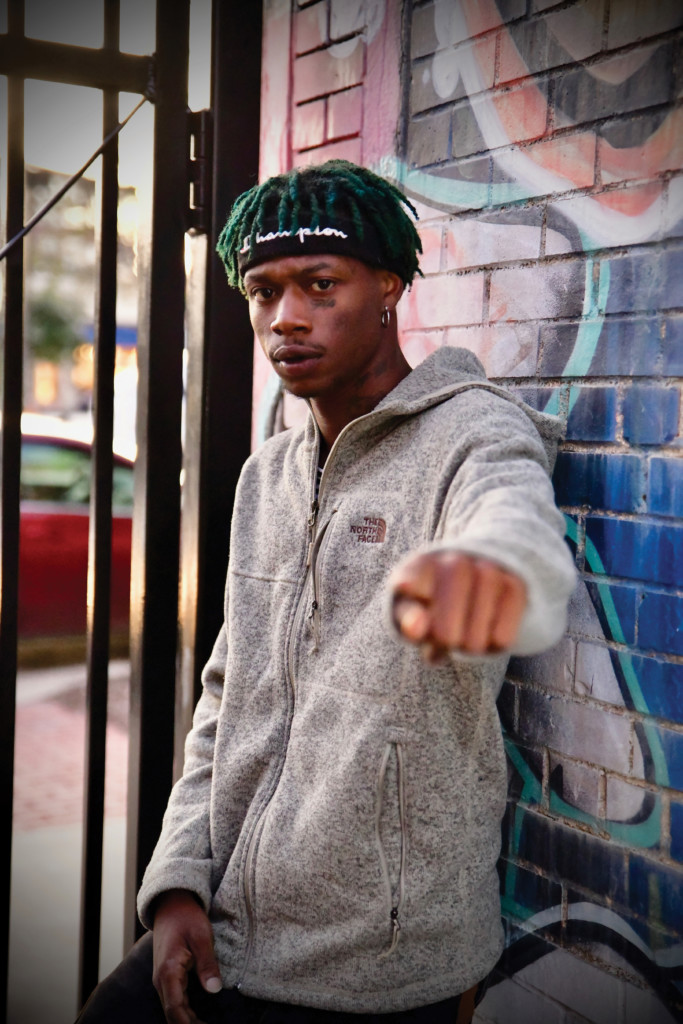 Song of Solomon is a high-water mark for recent local hip-hop. // Photo by Aaron Rhodes

Picture a young rapper that has risen to fame in the last few years, and somebody like Solomon comes to mind: face and neck tattoos, brightly dyed dreadlocks, a predilection for melody-driven bars and wild, booming beats. But how many of those trendy kids chasing rap careers got their stage name, as Solomon (born Jeremiah Roland) did, from church?

“I’m not gonna lie, I used to be saved,” the 21-year-old tells The Pitch. “I thought I was saved! I went to school, I was tryna be preaching and everything, like: ‘I’m saved, I ain’t gonna do no bad stuff!”

His family’s church was intense, the type of place where it wasn’t uncommon for members of the congregation to speak in tongues during worship services. Eventually, Solomon drifted away from organized religion, though he says he still attends church every now and then and appreciates the conversations he has with his grandmother about faith. These days, his religion is rap, and his debut album, Song Of Solomon, is a high-water mark for recent local hip-hop.

The record is the culmination of several years of restless creative activity. Solomon released his first rap project during his junior year of high school at the Paseo Academy of Fine and Performing Arts. Despite its lo-fi nature, the album— appropriately titled My First Words—reveals a teenage lyricist with a steady handle on earworm melodies and emotional vulnerability. Two songs explore the tough topic of the miscarriage of his daughter. “Even in my hype songs, it’s something serious,” Solomon says. “Even if you don’t catch it, it’s something serious in there.”

After My First Words came The Serious EP, a strong follow-up, thanks in part to a newfound partnership with the Caviart collective. The mentorship of Kansas City hip-hop veteran and Caviart leader Gee Watts pushed Solomon lyrically, and in-house production from [Walt] and slick visual elements courtesy of Kendu The Stampede and Armon Boyd lent the release a more professional sheen.

Two years later, Song Of Solomon has arrived. The album is a testament to the melodic intuition, storytelling chops, and disarming, star-power X factor—you kinda have to see him live or at least watch a video to fully get it—of this still-quite-young emcee. “Cold Baby” and “No More” have much in common with the work of auto-tuned party-rap master Travis Scott, but arguably contain more emotional depth than you’ll find in the Houston superstar’s discography. “Like That” is a hard-as-bricks ode to Solomon’s brothers; it features a percussive flow, inspired partially by late Chicago drill star Young Pappy. In an ideal world, Lil Uzi Vert (perhaps Solo’s most apparent artistic peer) would issue a remix of the infectious “Speed Racer”—shoulder shrugs, eye rolls, and all. But despite this range of influences, Song of Solomon somehow achieves a middle ground, a territory belonging only to Solomon.

One of the album’s most traditional and unassuming moments, “Dirt,” is, like a lot on Song of Solomon, an East Kansas City coming-of-ages story. Produced by Kye Colors, it packs several of Solomon’s most painful moments (miscarriages, girl problems, growing up poor, friends betraying him) and some of his loftiest dreams (riches, arena concerts) into two minutes of heartfelt rhymes over a soul beat. The lyrics also mention that Solomon dropped out of high school and now smokes weed with his stepfather. Rather than functioning as a weird flex or cartoon punchline, the moment is one of the most wholesome on the record.

“Back in the day, they used to take my weed when I was selling a little weed on the low or something,” Solomon says of his folks. “So now it’s funny that I can just sit down and chill and smoke with him.” His stepfather knows Solomon’s his own man now. So does Solomon.

Song Of Solomon is streaming now on all the usual platforms.