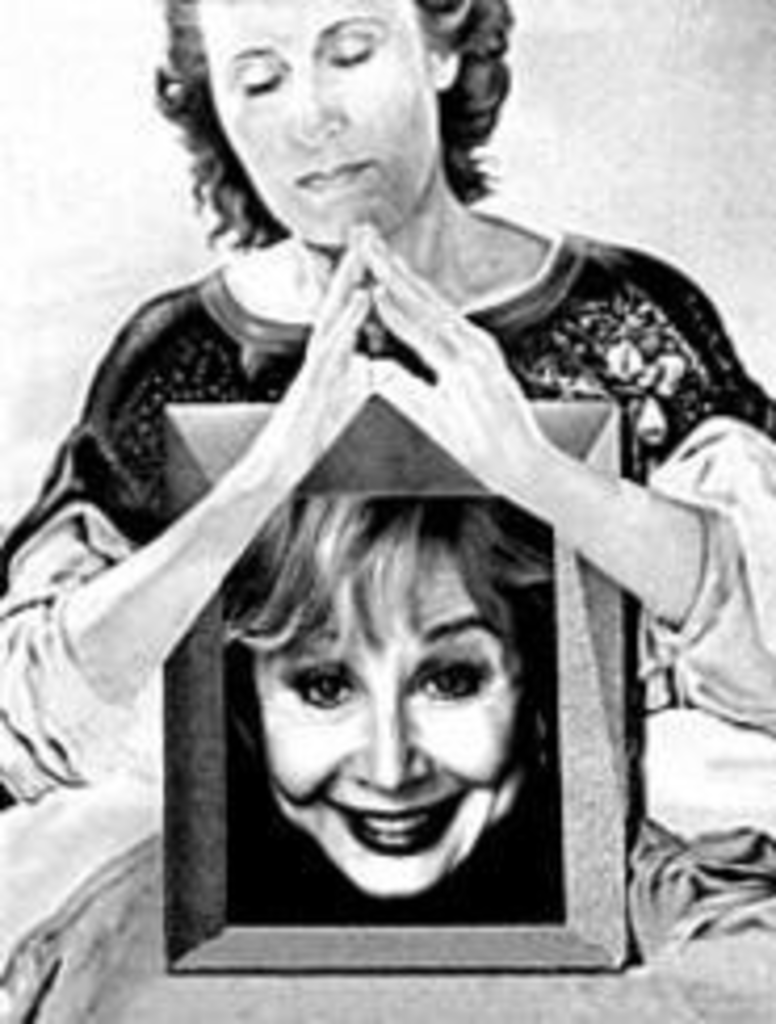 No Jewish-mother stereotype is as thorny as the Sophie Greengrass character in Andrew Bergman’s comedy Social Security, directed for The New Theatre by Dennis Hennessy. Were she a saint in anyone’s mind but her own, she’d be known as Our Lady of Perpetual Kvetching. More accurately, she’s a pain in the tookas.

Michael Learned, winner of four Emmy awards (three for The Waltons and one for her later series, Nurse) was a late replacement for Rose Marie, who bowed out of the dinner theater’s season opener. But after seeing Learned’s vicious yet delicious Sophie, it’s impossible to imagine Rose Marie in the part. A manipulative hypochondriac with selective deafness, who uses a walker as if she’s just learning how to be mobile, Sophie is a monumental strain on her suburban daughter Trudy (Cheryl Weaver) and son-in-law Martin Heyman (David Fritts).

The Heymans want the Kahns to take Sophie off their hands for a few days while they track down their daughter in Buffalo, who has quit college and moved in with two guys for a menage a trois. (When Weaver says she can’t imagine the possibilities, she asks Barnett “Can you?” — and Barnett’s silent double take is like one of Andy Roddick’s 130-mile-per-hour serves.) After a lot of huffing and puffing, the Kahns’ protests go for naught, because Sophie is downstairs in the car, packed and ready for transport.

The Act Two curtain rises on Barbara screeching into the phone about Sophie’s latest transgression. David has apparently told his wife to get Sophie dressed; he and the famous artist Maurice Koenig (Addison Myers) will be there for dinner lickety split. Of all the show’s sight gags, the one that gets the loudest audience reaction has Sophie stripped of her crass housecoat just as David and Maurice enter. (Her underwear is all white, like the apartment, but she doesn’t exactly blend into the surroundings.) She cleans up pretty well, however, and captures Koenig’s eye. All of Sophie’s feebleness and aches and pains have vanished and, in their place, a lovely, sophisticated chrysalis emerges, about to embark on a December-December romance.

Learned’s capabilities for broad comedy may surprise those on whom her Ma Walton character is imprinted. She’s an absolute nightmare as the early Sophie and a bon vivant at the close of the play; Learned goes at both full throttle, with zero vanity. And her costars aren’t laden with excess baggage. Weaver and Fritts are hopelessly square (he can’t even imagine a lemon wedge in his diet cola), while Barnett and Korinke are ambitiously trendy. In the foursome’s rapid sparring, though, it’s delightful watching how opposites attract. Myers is only onstage briefly, but he’s just as vivid as he needs to be.

Disaster Relief: Kansas City’s theater community hasn’t been immune to heightened sensitivities after the recent terrorist attacks. While concerns about images of pain and calamity haven’t forced the cancellation of entire shows (as happened with the Broadway production of Stephen Sondheim’s Assassins and several others), they’ve had an impact.

J. Kent Barnhart, whose On Broadway at Quality Hill Playhouse highlighted songs from this fall’s roster of Broadway shows, promptly excised the Assassins song “Unworthy of Your Love.” As a weirdly beautiful love song delivered by Squeaky Fromme and John Hinckley (respectively, Gerald Ford’s and Ronald Reagan’s would-be assassins), it required some setup that Barnhart says was just too dicey for post-September 11 audiences.

And when Late Night Theatre reopens this winter, gone from its season will be Disaster 2002. Because the show was written to include salutes to traumas from such films as Airport ’75 and The Towering Inferno, it made sense to replace it with something else. Late Night’s Ron Megee says he’ll more than likely revive The Stepford Wives, which hasn’t been seen since the troupe made its home at the Westport Coffeehouse.