So it’s come to this: Jeneé Osterheldt is too good for the Star 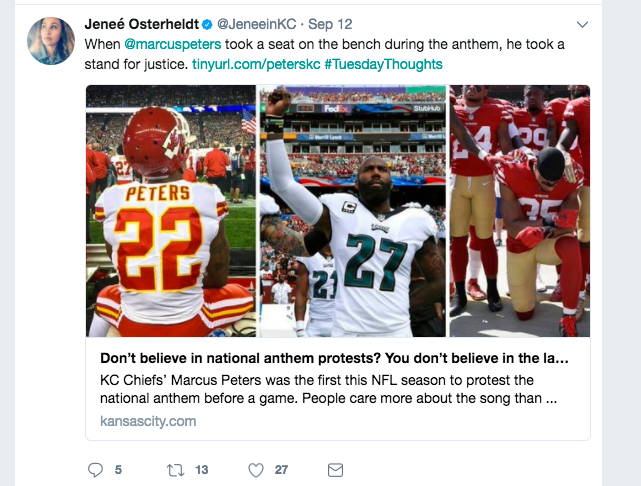 In 2016, longtime Kansas City Star columnist Jeneé Osterheldt departed the paper to accept a yearlong Nieman Foundation for Journalism fellowship at Harvard. Last month, she returned to the daily. She shouldn’t have.

I’ve been critical of Osterheldt in the past, sometimes even juvenile about my dislike of her writing, which has always struck me as sentimental and trite and which shouldn’t have been given such prominence while the paper sloughed off actual news gatherers at a depressing pace. But when I say she should have stayed away, I’m not complaining about her prose or building toward a joke. I am saying that she should move on because she’s being undermined by the Star‘s opinion desk — which until recently seemed like the destination she was being groomed for, but is now run by rookie publisher Tony Berg, for whom no syndicated byline or guest column is too suspect. I am saying that Osterheldt is above the paper’s editorial pages as they exist today.

Let’s back up a little. The first column Osterheldt published when she got back was unusually political and prickly, but she followed it with a more routine love letter to local retail. All appeared roughly as it had before.

A few days ago, however, Osterheldt held up Marcus Peters — the Chiefs cornerback who lately has sat out the national anthem — as a local lens through which to examine recent protests within pro sports. Her September 11 column, linking Peters to deposed 49ers quarterback Colin Kaepernick, was hardly radical; she said nothing new about what we talk about when we talk about black athletes calling for all Americans to pay better attention to all that is broken.

One thing, though: Her Peters column had the great virtue of being simply and altogether correct: If you say you value the flag and love that terrible old beer-hall song, then you must respect protest.

Another thing: It happened to arrive within a few days of The Atlantic‘s having published the Ta-Nehisi Coates’ book excerpt “The First White President” — easily the most brilliant response so far to Donald Trump’s election — and John Branch’s vital New York Times story about Kaepernick. And if anyone at the daily read those pieces, it was Osterheldt — not, judging by how the Star‘s editorial board addressed the Peters matter, anyone among that crew of tsk-ing suburbanites.

Meanwhile, of course, the September 11 piece drew a predictable thunder of idiocy and cretinism.

Witness Osterheldt’s follow-up column, which quotes a jarring and grotesque array of ignorance, abuse and threats, and makes plain that plenty of people are rendered apoplectic and irrational — though sadly not mute — when confronted by plain truth. Especially when that truth is conveyed by a woman or a person of color — or by a woman who is also a person of color.

Other expressions of truth somewhere in the Star’s opinion pages would signal the paper’s interest in unifying its stance, whether behind one writer under attack or as an intelligence-based enterprise. But that would be too easy. (More typical of the Star is that, thanks to the inclusion of some encouraging words from a few of Osterheldt’s readers, her column spelling out that people wished her dead was slugged “Marcus Peters’ anthem protests bring out the hate — and love.” As though this was just another of Vahe Gregorian’s folksy, head-injured fireside sports chats.) 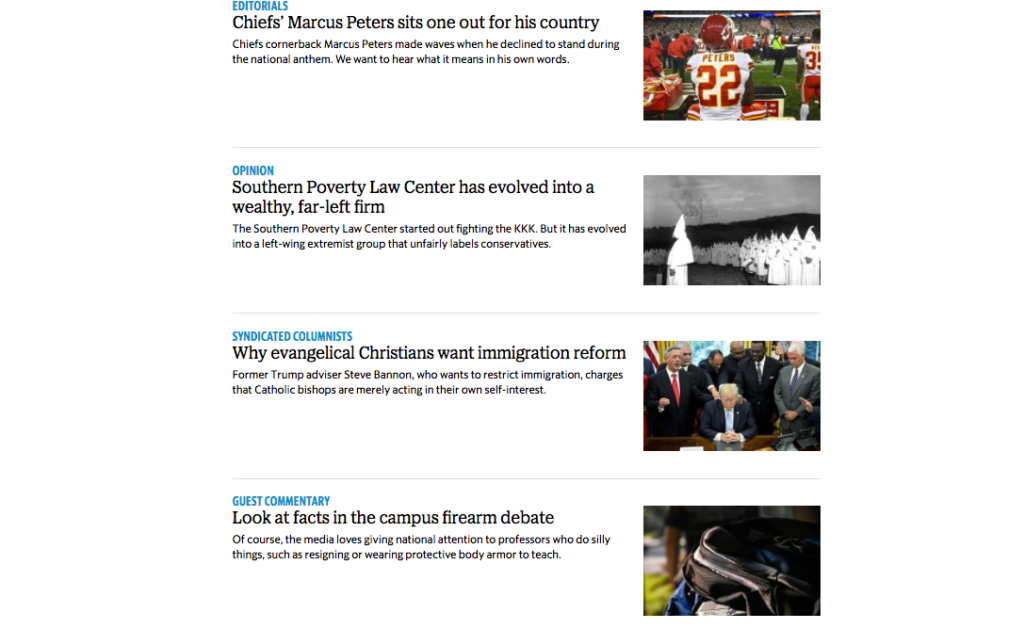 No, what we’ve had instead lately are just the latest reminders that this editorial board’s priority is to find a way back into some long-gone hearts, via the troll-baiting curation of anti-progressive voices.

I’m not sure just what theoretical ex-subscriber or former ad buyer among the bloodiest quarters of the red-meat crowd is turning to the Star for clarity these days, though. Does the editorial board really mean for people to rally around the Colorado Springs Gazette‘s attempt to discredit the Southern Poverty Law Center (printed in Colorado September 9 and republished here three days later), or nod along with the “special to” guest shot purporting to educate us all on campus carry (also September 12)? Yet there they are, handpicked boxcars of fringe horseshit — one published under the aegis of super-rich hate squonk Philip Anschutz, the other by pro-gun Vulcan and noted fraud John R. Lott — hauled in to stink alongside locally derived piles of conventional wisdom and both-sidesing (and that inescapable piece of bad art that goes with everything KCI-related). What, Jonah Goldberg costs too much now?

Compared to those appalling options, Jeneé Osterheldt, lifestyle columnist, is the Star‘s only opinion writer who sounds like the future. This confused editorial board could do worse if it hired her to fill its last nominal vacancy. But she could clearly do a lot better somewhere else.