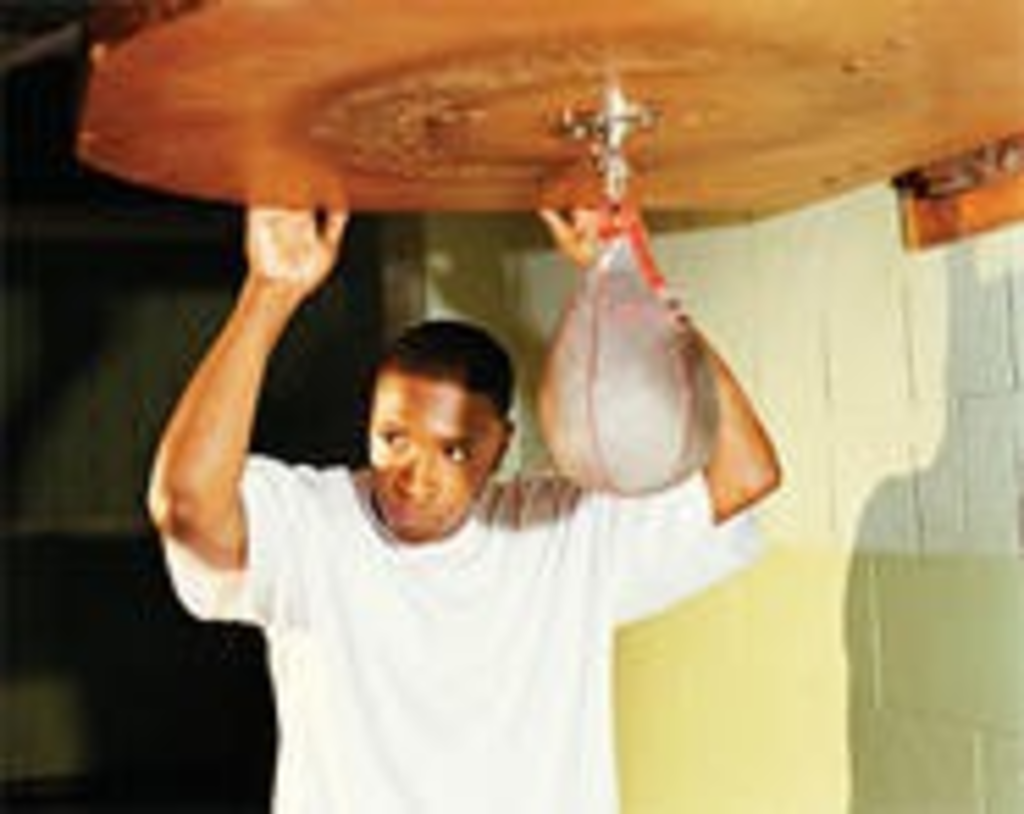 It was, according to no less an authority than The New York Times, the year rap went regional.

There was plenty of recent evidence to support this claim, beginning with the suddenly paltry record sales racked up by some of hip-hop’s heaviest weights. There was historical evidence as well: Since the Dirty South shook off the bicoastal stranglehold of the mid-’90s, hip-hop scenes have developed in at least a dozen major markets.

By 2006, most of those cities had mutated the music and culture beyond the recognition of all but the most dedicated hip-hop fan. These towns had their own sounds, their own slang, even their own subgenres. A staple of late-night TV humor used to be exploiting a senior citizen’s unfamiliarity with hip-hop; now you have to tell Grandma the difference between the laid-back groove of ³snap music² and old-fashioned, high-energy crunk. The punch line: Her grandkids might not have been able to explain it.

But then along came Jibbs‘ “Chain Hang Low,” jingling like the last ice-cream truck of the long, hot summer, and a lot of those feudal, walled-city lines seemed to fade. With a melody Grandma would recognize (it was drawn from the children’s song “Do Your Ears Hang Low,” which takes its melody from the traditional “Turkey in the Straw”), a G-rated lyric (the pimp reference notwithstanding), and a beat that repped the stuttering sound of St. Louis without shutting out fans from other locales, it was a reminder of hip-hop’s power to unify.

In person, Jibbs isn’t shy about expressing his ambition. He might have just turned 16, but he doesn’t sound like he’ll be satisfied hanging around St. Louis and disseminating new dance moves on YouTube.

“I’m trying to hit every market, man. I mean, every market,” he says. “I wanna get everyone involved, and not just try to sell my album to one particular group of people.”

He might not have a choice, of course: Now that the effects of leaks and digital piracy are hitting the ill-prepared industry full force, gold albums are starting to look great, and even going “wood in the hood” isn’t quite the admission of failure it used to be.

And now we will proceed to spotlight a few of 2006’s other notable hip-hop trends.

It was the year of the comeback. Hov‘s inevitable return got most of the ink, but it wasn’t the most notable. A couple of veterans who’d been on cruise control for a while finally awoke, and these sleeping giants turned in two of the better albums of ’06 (not to mention their careers). Snoop Dogg‘s Tha Blue Carpet Treatment worked because Tha Doggather finally applied himself. On Fishscale, Ghostface finally found some topics and tracks that matched the intensity of his high-pitched, borderline-crazy voice, and he emerged with a coked-up, weirded-out winner. And Virginia’s long-MIA Clipse seemed ready to emerge from purgatory by year’s end with the sometimes-stunning Hell Hath No Fury.

The comeback moment of the year, however, involved not only Ghost but also his Wu-Tang brethren. On February 7, the Clan’s post-ODB era began in New Haven, Connecticut. The reunited group, plus supersub Cappadonna, were maddeningly erratic. Yet somehow, group leader the RZA managed to assemble all his bandmates in the same room and even get the lackadaisical Method Man to act like he cared. Call it the miracle at Toad’s Place.

It was the year of the mix tape. From its humble origins as a street-corner hustle, the mix tape has become an ever more vital part of the hip-hop artist’s arsenal. Filled with rare tracks, remixes and exclusives, mix tapes don’t just build anticipation for an upcoming album anymore — they deserve consideration on their own merits. And no one puts them together like Cleveland’s Commissioner, Mick Boogie, who oversaw some of 2006’s best and brightest mix tapes.

Although he did yeoman work all year and teamed up with titans Jay-Z and Eminem, the best of Boogie came on some of his lower-profile projects. Case in point: his Mobb Deep mix tape, More Money More Murda, which shredded the album it was supposed to help promote.

For the record, the Commish would like to point out his own notable ’06 trend: “The return of good albums,” he says. “Hip-hop has been lacking in album quality for the last two years, but this fall has been tremendous. Great full-lengths from Jay-Z, Nas, Clipse, Outkast, Game, Snoop and UGK are closing out the year with a bang. Who says albums are dead?”

It was the year of the British — sort of. In fairness, 2006 can’t be counted as the sort of watershed 12 months we witnessed two years ago, when Dizzee Rascal, the Streets and their grimey countrymen planted the Union Jack in hip-hop’s bloated American carcass. Mike Skinner was only at three-quarters strength on the Streets’ The Hardest Way to Make an Easy Living, but his Cockney wisecracks were still more fun than three-quarters of his Yank counterparts. The wee, witty Lady Sovereign — Def Jam’s nod to the British invasion — took care of anyone Skinner failed to offend. Meanwhile, one of the most slept-on releases of the year came from UK vets New Flesh. Universally Dirty mashed up dancehall, grime and even soca to give British hip-hop yet another brand-new beat.

It was the year of deep thoughts and the year of partying (and, sometimes, deep thoughts about partying). There’s room for both viewpoints now in hip-hop’s increasingly diverse underground, which is good news indeed. Critical darling Spank Rock might have merely made Too $hort safe for all the eggheads who thought they were too $mart for him the first time around, but even so, was there an album more fun in 2006 than the high-concept, low-art Yoyoyoyoyo? Didn’t think so.

Fun in their own thoughtful ways were albums from the Bay Area’s Ise Lyfe, whose SpreadtheWORD suggests that he might someday take over Mos Def’s mantle as hip-hop’s activist poet laureate, and Georgia Ann Muldrow, an adventurous Los Angeles artist who reassembles urban music in novel ways on Olesi: Fragments of an Earth. Both discs make great soundtracks for the parties in your mind.

“I would definitely say that the hottest trend,” he offers, starting to chuckle, “was people that got their chains hangin’ low.”