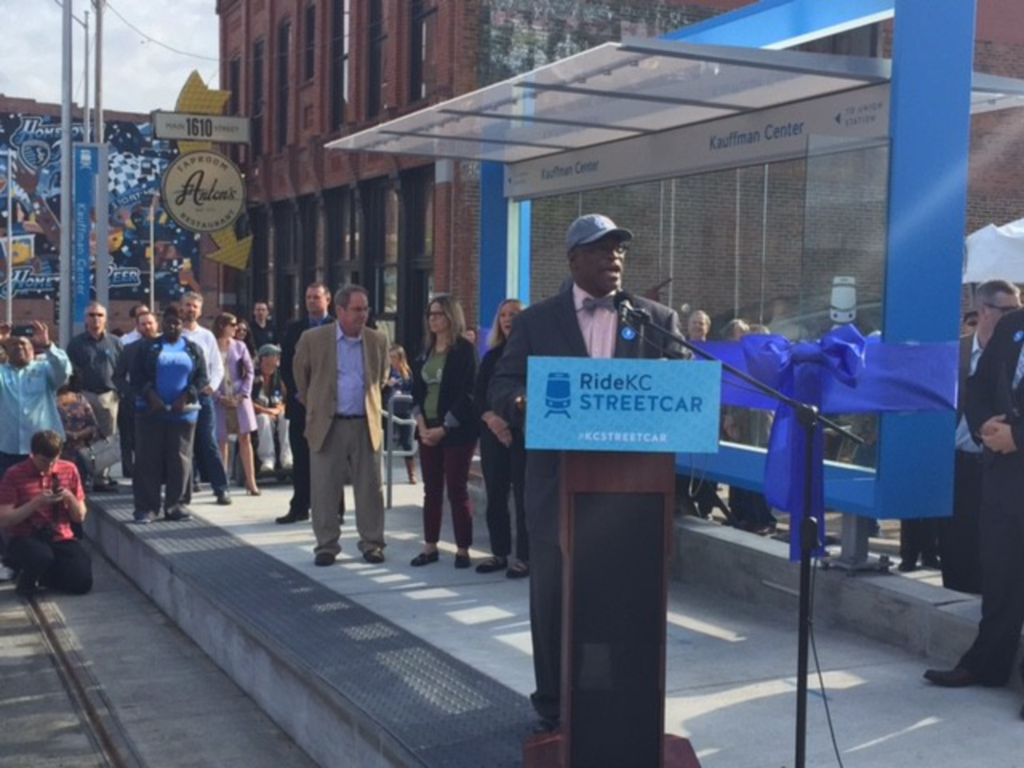 A couple of hundred streetcar supporters, streetcar construction workers, local politicians, journalist types and other civically engaged persons assembled at 16th Street and Main this past Friday for a happy hour to celebrate the completed construction of the Kauffman Center stop, the first shelter stop on KC’s downtown streetcar line.

Inside a white tent, people grazed on free food from Nara and Anton’s, drank from kegs of Boulevard beer, and said things to each other about “walkability” and “density.”

Outside the tent, Mayor Sly James spoke at a podium. Wearing a gray KC Monarchs baseball cap, James touted the $1 billion in new investments within blocks of the streetcar. “That’s billion with a ‘B’,” James said.

He boasted of the 45 new downtown projects currently in the works, “23 of which received no incentives,” James said. We’ve got a little context on that here.

James also said a few words about recent news that the City Council had approved a $15 million plan to partner with Cisco Systems to become the first “smart city” in North America.

“Here in Kansas City, we don’t just think outside the box; we realize there is no box,” he said.

Then James walked over to the streetcar stop — it’s blue and white, with a little canopy; it looks sharp — and centered himself with City Council members Jan Marcason, Jim Glover, Russ Johnson, Cindy Circo and Melba Curls. Photographers and TV-camera operators trained their lenses on our elected leaders, and James cut a big blue ribbon with a big pair of scissors. Applause.

The mayor’s spokesman, Chris Hernandez, grabbed the microphone and encouraged the crowd to stick around and take selfies in front of the stop. “Don’t forget to hashtag them #KCstreetcar,” Hernandez said.

The formalities over, the crowd returned to its food and drink and conversation.

On the southern edge of the cordoned area, a cluster of construction workers in matching “KC Streetcar” navy polos stood leaning against some barricades. One patted at his front pant pocket. “Do you think it’s OK for us to smoke now?” he asked.