Slave to the Toastmaster 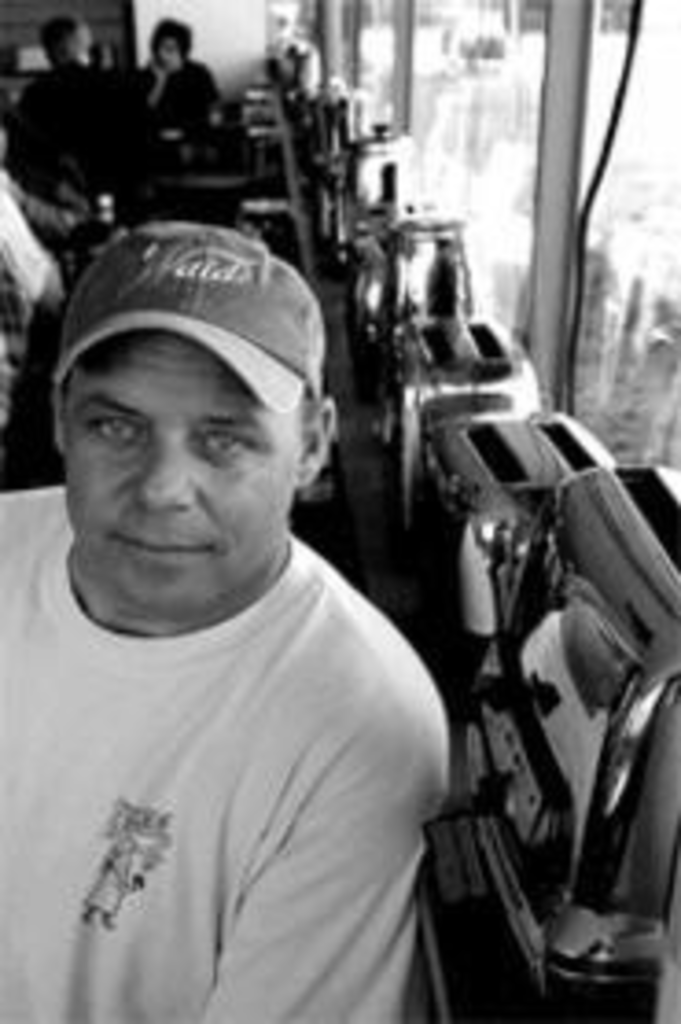 Collectors are junkies. Their eyes are hooked on eBay like Zora Neale Hurston’s were on God. It’s an endearing disease, to be sure, but a disease nonetheless.

Bailey has in his possession about 2,000 vintage kitchen appliances, mostly toasters and coffee makers. Even his restaurant could be considered part of his collection. He bought it to have a place to really show off his toasters; the toastoholic display in the windows represents only a slice of his collection.

It began with a whimsical purchase at an estate sale. It was a 1938 Buck Rogers made to toast four slices of bread at once. The estate sale, it should be noted, is a gateway for some people to fall into a lifetime of collecting. Others include hobby stores, thrift stores and the Internet.

I remember the first toaster we used at home. It was an ugly, cream-colored thing made in the 1970s. It didn’t break; it just got purged when we moved, after which it was replaced by — gasp! — a toaster oven, that insult to the simple, magical act of plopping in a slice of bread and watching it pop up brown.

Bailey remembers his first toaster, too.

“It was a Toastmaster,” he says. “Avocado-green.”

“We had a Proctor-Silex percolator,” he answers nonchalantly, seemingly oblivious to the fact that there might be something unusual about his level of specificity.

At Waid’s, selected items from Bailey’s collection are slowly taking over every flat surface not needed for customers’ food, and the artwork on the walls will soon make way for his framed kitchen-appliance advertisements.

Bailey doesn’t fully understand why he can’t stop buying old toasters and coffeepots. He knows that he likes them. But then, lots of people like lots of things. That doesn’t mean they go out and accumulate thousands of them, purchase a warehouse space in Kansas City, Kansas, to make room for them all and buy restaurants to display them. “If I like it, I buy it. It’s as simple as that,” he says. “I tend to jump in when I start collecting, and I don’t stop until I have either no room or no money.”

This makes me think of Leila Cohoon, the woman behind Leila’s Hair Museum. When I first visited Leila’s, about six years ago, I was astonished to discover that the vast supply of hair art — ranging from wreaths to lockets to jars in which women used to keep hair from their brushes — was just one portion of Cohoon’s personal collection. I was even more floored when, years later, I actually interviewed her and asked how she got started. She explained that she’d gone to the Plaza to buy shoes for Easter in 1957; it was there that she saw hair jewelry for the first time. She came home with a follicle locket instead of shoes and has been accumulating these strange handicraft items ever since. That’s all the explanation she had. But like Bailey, she couldn’t stop. “I had too many of these things under my bed and in my closet,” Cohoon confessed. “I couldn’t hide them from my husband anymore.” So she opened the museum.

Collectors who are really out of control often try to hide their acquisitive natures from friends, loved ones and even spouses. A call to Brookside Toy and Hobby confirms this. Holly Nielsen, who answers the phone, explains that the most fiercely collected items in the shop are William Brittons — tiny military figurines that were once made of lead but now are die-cast metal. “Guys will get really into a specific war,” she says. She recalls one man who bought a mansion in Atchison to house his miniatures. And yet, she adds, dude still claims he’s buying them for his kids. Even more bizarre is the William Britton collector with the anti-war bumper stickers who attends anti-war protests and claims that he hides his collecting habit from his wife.

But Bailey is unashamed of his old toasters. One, a Sunbeam model, was made for the 1933-34 Chicago World’s Fair (themed “A Century of Progress”) and is engraved with the Art Deco logo of the event. One is a conveyor toaster — you set the bread on a conveyor belt on one side, and it moves through the toaster and comes out evenly browned on the other end.

All of Bailey’s toasters work. He knows this because every time he buys a toaster, he uses it for a couple of weeks to be sure.

He then removes all of the cords, making it impossible for customers to use them. “I thought about putting a toaster at each table so that people could make their own toast,” he says. “But forget it. With insurance liabilities, it [the premium] would be too high.”

But when customers ask him to, Bailey will use one of the old coffeepots on display to demonstrate how they work. People often get nostalgic about the “double bubble” coffeepots, which are actually not percolators but vacolators. Bailey uses the double bubble at home because, he says, “It’s a much better coffee.” He calls the toaster he uses at home “the lazy man’s toaster” because when he places a slice of bread in the slot, it drops into the toaster automatically. The toaster has no lever; when the toast is ready, it just eases back up out of the slot without making so much as a popping noise.

You’ll find similar testimonies if you start looking at Web sites dedicated to vintage toaster collecting (sites such as toastercentral.com and toaster.org). These people are drawn to slick toaster design. They realize that the cheap, modern toaster browns unevenly, is unattractive, and one day just dies. The toaster buyer who is unwilling to spend hundreds of dollars on a designer model is condemned to a lifetime of looking for a new toaster.

In a New York Times technology column dedicated to the vintage toaster, Michelle Slatalla writes about the fifth in a succession of badly made modern toaster ovens she used. This one wouldn’t turn off. She took it to a repairman and told him, “It’s like a Stephen King version of a toaster oven. It’s possessed. It won’t turn off and is trying to burn down the house.” The repairman discouraged her from bothering to fix it. The toaster was made to be thrown away and replaced.

Bailey, for his part, is enamored of the history contained in kitchen appliances. In his collection of toasters made from the 1920s through the 1970s, he sees ingenuity, problem solving and progress. “The evolution of a toaster is unbelievable!” he says excitedly. “The mechanics behind it, the brain work, the thinking. I guess that’s what attracts me. To see one time period and how it leads to another.”

Nice try, Bailey. It’s a good explanation and all, but we know that, deep down, you just have this need for toasters. Luckily, Kansas City’s breakfast eaters have an equally strong need for toast. We know; we’ve been there to order it. This isn’t about a simple appreciation of sleek, retro design.