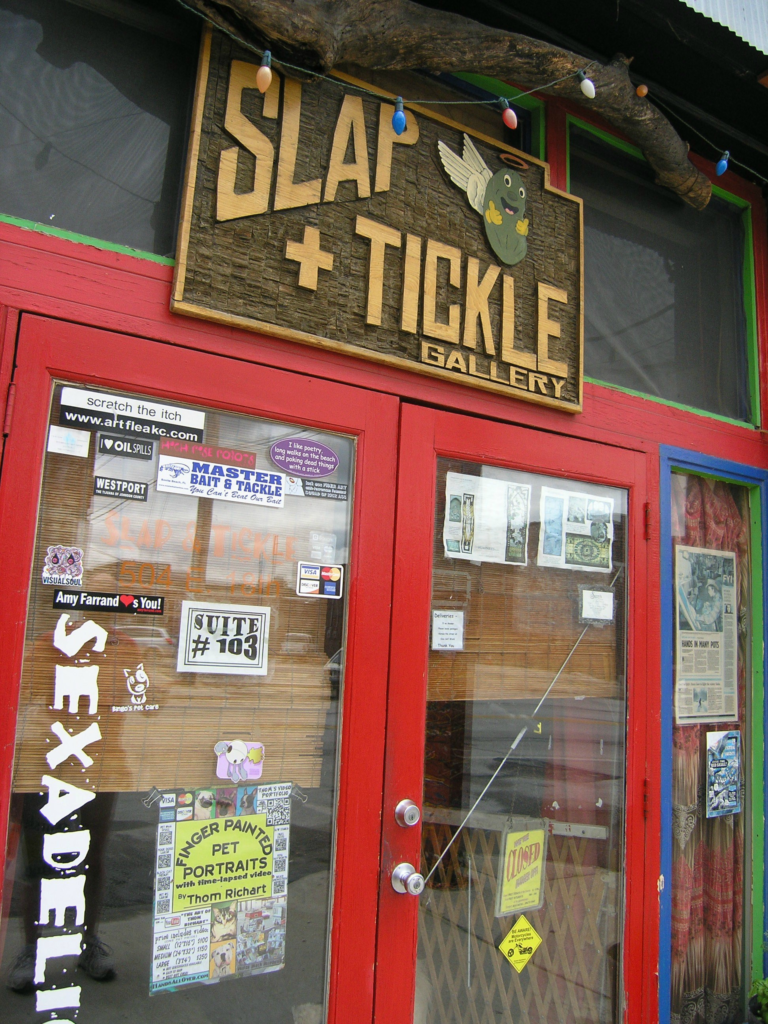 Tonight, after a “Soul Train Dance” down the art alley between the Next Space and the Crossroads Boot Camp, the East 18th Street community loses one of its liveliest tenants. Apryl McAnerney says it’s time to move on, so she’s closing her Slap-n-Tickle gallery, leaving behind the concrete and brick to live in a house in the West 39th Street neighborhood house, where she’ll have more yard and less burlesque.

A perennial contender in The Pitch‘s Best of Kansas City balloting, contest, the Slap-n-Tickle was art all the time. Every space, from the kitchen cabinets to the high walls, was covered in art, even the bathroom.

All that plus the occasional risque performance.

McAnerney founded the Slap-n-Tickle with Mott-ly (Tisdale), who died in May 2007. He had closed his own MoMo gallery before he really got to enjoy having friends over, says McAnerney, who shares her home now with Thom Richart (noted finger-painter of pet portraits). She has called her home and its gallery a space for “misfit toys.” Some of those toys aren’t for the faint of heart, and warnings on the door make it clear that if you’re offended by adult content, you just shouldn’t come in.

Having a monthly party – which meant stocking beverages and toilet paper in addition to organizing artists and generating press releases and updating social media and websites and then letting 300 people come celebrate in her home – had started to cut into McAnerney’s own art making. But she says it’s only with a heavy heart that she decided to close the space and live elsewhere.

McAnerney, who has a show with Marcy Lally at the Leedy-Voulkos Art Center through the end of June, will continue to run Locust Factory KC (next door to the Slap-n-Tickle) and to help Jodi Wilkins (who ran the Pi Gallery, at 419 East 18th Street, for seven years) curate the Main Street Gallery, over Anton’s Taproom (1610 Main).

Tonight, you can get a last taste of Slap-n-Tickle’s unique hospitality and carnival-like atmosphere. The going-away party – called “The Last Dance” – starts at 6 p.m., with that Soul Train Dance at 7 and an auction and raffle (with some of McAnerney’s personal collection of art and Tickle memorabilia) at 8. It’s at 504 East 18th Street; details at letyourfreakflagfly.com.