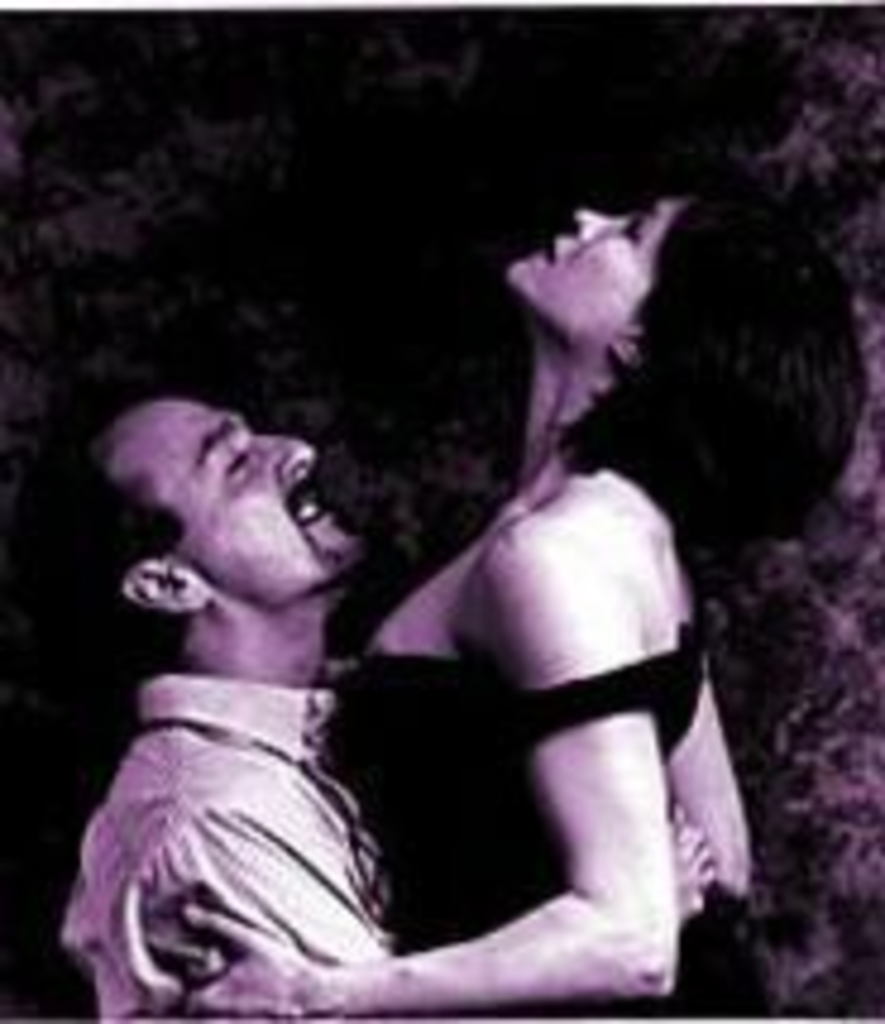 I’ve been looking so long at these pictures of you that I almost believe that they’re real. Those are the opening words of The Cure’s “Pictures of You,” and they set the perfect mood for Patrick Marber’s Closer at the Unicorn Theatre, where several scene changes are scored to the band’s dark and lovelorn anthems. The line is also a good synopsis of the play; whether pictures are hanging on walls or simply are images upon which we hang our own expectations, human nature dictates that we see only what we want to see.

Marber’s play has been rightfully described as both crude and meticulous. Some audience members will most likely consider it pornographic — its language is perhaps the harshest ever uttered on the Unicorn stage — though no one is ever shown in the act. People who believe curse words are only for the inarticulate may not get how, whether the words are used to seduce or harm, here they’re simply part of the landscape. And Closer is meticulous in its flawless structure and frightfully honest emotional wallop. It’s one of the miracles of theater when characters who cannot express their emotions prey so intensely on ours.

The play is about how four people meet, fall into something akin to love and then wreck it all — and director Cynthia Levin has managed to get Marber’s intent under her skin. Scenes play out with as much care as they begin or end — just watching how the actors enter their scenes makes it clear where they are and where they’re coming from. In a scene at an art opening, for example, Daniel (Scott Cordes) has to zig and zag through a maze of jagged wire mesh before he comes onto a picture he can’t abide: his girlfriend, Alice (Cinnamon Schultz), chatting with another bloke. He’s like a grunt walking into friendly fire.

Alice and Daniel first meet after a vehicle nearly runs her down. “Knight,” she says, prompting him to reply, “Damsel.” But after this once-upon-a-time beginning, there won’t be any happily ever after.

Larry (Mark Robbins) is the doctor (a dermatologist, actually) who nearly walks right past Alice in the waiting room until she zaps him with her gaze. They meet again some time later (the play spans four and a half years) at the art opening for his girlfriend, Anna (Cheryl Weaver), a blunt artist who specializes first in pictures of strangers and then, fittingly, in deteriorating facades. It’s the start of a dangerous swap meet.

Both men eventually couple with both women and, though the same genders don’t have sex with each other, they get closer than not. In the play’s wittiest exchange, Daniel, posing as a woman named Anna, has cyber sex with Larry. All the possibilities for filling human orifices are addressed on a large monitor between them — the scene plays out in silence except for the click and clack of their keyboards — and even a purposeful typo gets a huge laugh.

Robbins is not an actor known for vulnerability, so his periodic meltdowns here are all the more interesting and painful. Cordes’ Daniel is a member of the walking wounded; despite charges that he’s unable to be open, he nearly crumbles when accused of having sex with his eyes closed. Weaver’s Anna is at times just as fragile, but she has consumed enough metaphoric antifreeze in her life to keep her chilly yet mobile and terribly resourceful. Schultz is the surprise of the night. She’s been part of equally powerful ensembles before, but never has so much of the spotlight shined on her so complimentarily. “I never look where I’m going,” she says early in the play, and the line prepares us only to a degree for each experience she guilelessly crashes into.

Adriana Sandoval’s set is bare except for a fence and the computer monitor (which, after the cyber sex scene, becomes a canvas at the art show, an aquarium and a cemetery). But what works exceedingly well (as it did in the New York production) is how the stage is cleared after every scene: Pushed behind the fence and left in full view of the audience, the temporary furniture exemplifies all the clutter the characters leave in their wake. Atif Rome (who usually does sets) has designed costumes that keep everyone in a kind of suspended mourning. Jeffrey Cady’s lighting both shouts and whispers at appropriate intervals, and David Kiehl’s sound design, in addition to embracing The Cure, gurgles subtly behind the dialogue.