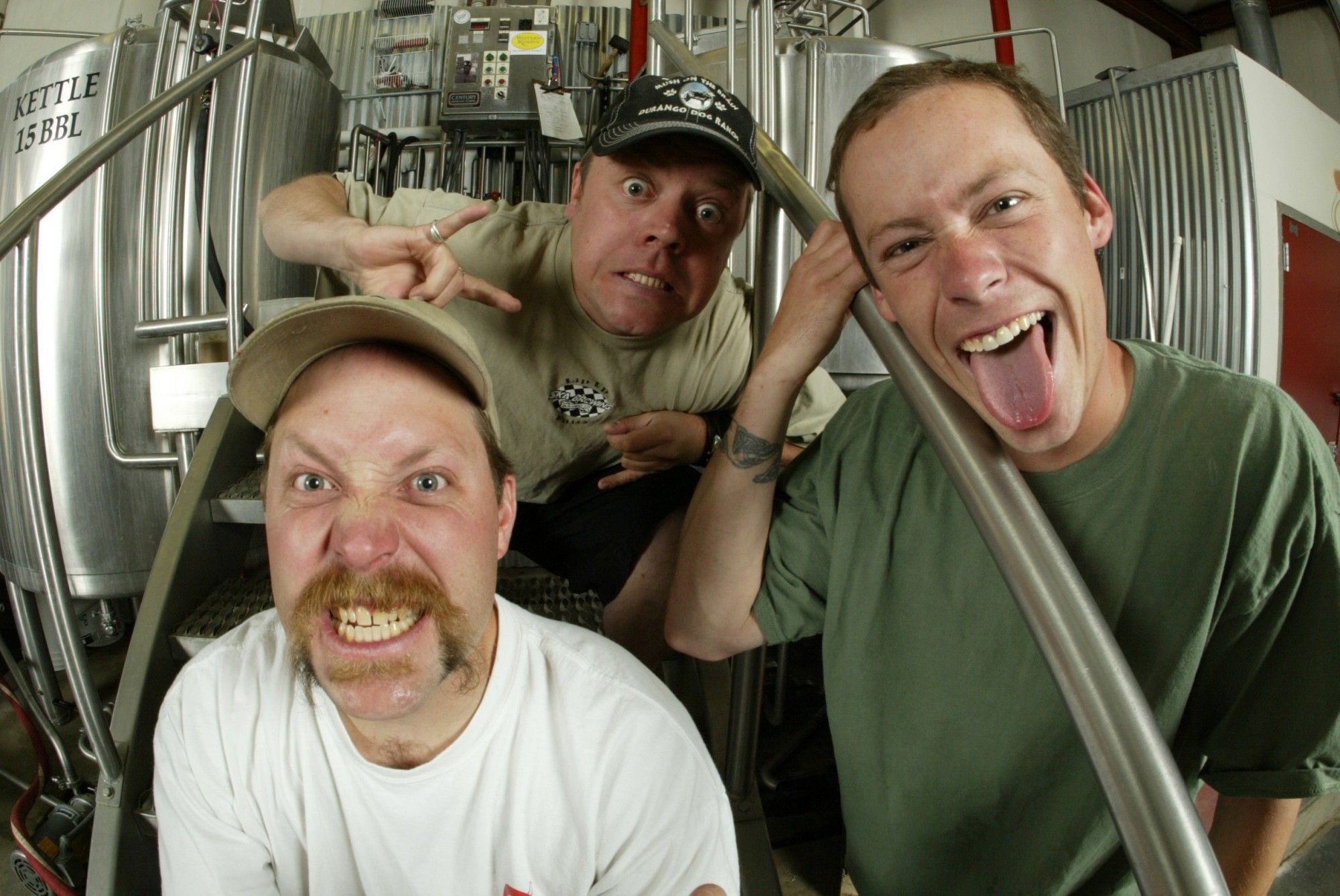 Durango, Colorado’s Ska Brewing is obviously a beer company that takes inspiration from music. It’s right there in the name. Ever since the company was founded in 1995 by Bill Graham and Dave Thibodeau, the music for which the brewery is named has been integral to their identity. Ska Brewing just celebrated its 26th anniversary back in September, and with the recent release of Mexican Lager Dark and their winter ale, Euphoria, it seemed like a fantastic time to speak with co-founder and CEO Thibodeau about the company’s journey.

The Pitch: When Ska started, it’s at a very interesting point because, as craft beer is beginning its mainstream upswing, it’s also right at the same point as when ska became a similar thing, musically.

Dave Thibodeau: That’s pretty funny. I think we were always into ska. We were into a lot of traditional ska, but when we were in high school and college that second wave of Two-Tone ska music was kind of our big thing. And then, when we actually got around to opening the brewery in ’95, that’s right where that third wave of ska was really becoming a thing. Yeah, it was at the same time.

That first run of craft beer was, I’d say, early ’90s and then it maybe peaked within the next couple of years after we started and the growth trajectory slowed down before it then took off again, leading us to where we are today, but you’re right about both of those things. We didn’t do any of that intentionally. We were just into ska music and comic books and punk rock and beer, so we just kind of put them all together, just because they were the things we were into. We weren’t being very strategic at all—intentionally strategic, anyways.

What were the beers that Ska started out with?

The very first beer we made was was our True Blonde, which we still make to this day. We actually just want to Great American Beer Fest and medaled with it. That was the very first batch of beer we made and when it was ready to serve, we served it at what is now the Telluride Blues and Brews Festival, but that was the second year ever as a festival.

Back then, it was just called the Telluride Brewers Festival and there wasn’t as big of a focus on music. It was the very first beer we poured. After the True Blonde, we brewed Pinstripe [Pale Ale], which we also still continue to make to this day. They were both pretty easy-drinking, medium-body beers. 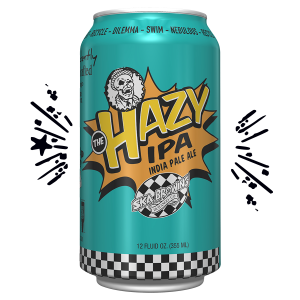 As the label has gone on, there are definitely times where you have leaned really hard into the punny kind of names–Mexican Logger, Cru D’Etat–which I’ve always been fond of, but do you find that that helps or hinders when people are buying your stuff?

Good question. I actually think I have a pretty good answer for it. I think when we really did lean into some of that stuff, it wasn’t–you got to keep in mind, when we started, there were about 800 breweries as opposed to the 9,000 there are now in the country. It’s really hard to name a beer now and anything punny–once you hit that trajectory of brewery openings at such a massive rate, the proliferation of punny names became pretty tired, just like ska music, right?

I remember when we got into the early 2000s, we used to promote shows here in Durango and finally, I was like, “We got to stop bringing ska bands to town. Some of these bands suck and people are just getting sick of this.” It’s kind of the same thing with the names. We went through a long period where we thought we were pretty funny and we were coming up with funny names and punny names.

We did kind of a rebrand at the onset of COVID. You’ll see that we kind of re-branded as far as our names goes so now, instead of seeing a name like Modus Hoperandi, you know, our hazy IPA is called The Hazy IPA. It doesn’t even have a name. Then we have a tropical hazy IPA and it’s called The Tropical Hazy IPA. We got sick of it ourselves and we saw far too much of it out in the world and then we sort of reeled back from that. Frankly, we’d had enough.

We do mess around with some wordplay and we use a lot of ska and punk rock lyrics, and sometimes just tweak stuff out of song lyrics to come up with names sometime but lately, we’ve just been naming our beers whatever the style of the beer is and putting “the” in front of it. 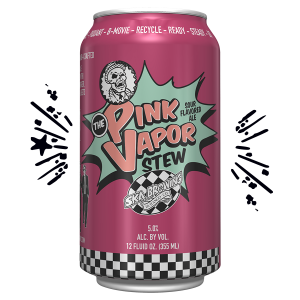 The music references have obviously been there since day one, but in recent years, you’ve put out your sour, The Pink Vapor Stew, which is a lyric from Fishbone’s “Party at Ground Zero.” The grapefruit lager, Rue B. Soho, comes from the Rancid song. How much did music play a part in those early days of getting the brewery up and running? Obviously, you still sponsor shows here and there and they’re a big part of your anniversary celebrations, but how did it play a part like in the day-to-day and how did it motivate you to get all of this going?

That’s crucial to our being. Before we actually started the brewery, my partner, Bill, and I, we were homebrewing a lot–actually through high school and into college–and we got to a point where we had two criteria when we would homebrew that we had to follow, otherwise the batch we were working on wouldn’t turn out (or we believed so, anyway).

Those two criteria: the first one was you have to drink your previous batch of homebrew while you brew your subsequent batch. The second one was you had to have ska music playing when you brewed. So, from day one, before we even opened the brewery, we felt like it actually somehow contributed to the quality of the beer.

To take that a step further–are you familiar with the term terroir, like in wine? It’s kind of the environmental factors that contribute to the character and the quality of the wine itself. And terroir, I think literally in French means “earth.” I think it means the dirt you’re growing the grapes in, the surroundings, the environment.

If you take that into the brewhouse with beer, at least at our place, there’s always music playing here. There’s music in our packaging room. There’s different music in the brewhouse. There’s different music in the tasting room. It’s never not part of the day-to-day here. It’s not always ska music–there was a lot of punk rock, and there is a lot of punk rock still, but it’s part of our terroir. It’s the environmental factor that’s part of the energy and the space and part of the ideology that maybe comes along with the type of music we listen to, maybe even the somewhat irreverent sense of humor.

All of it’s tied together and I think contributes to what we actually put out as a product at the end of the day. I don’t know a very clear way to explain that, but personally, I feel like it’s one of the most important things that’s part of our existence and part of the beer that we actually brew and get out there to the consumer.

Over the history of Ska Brewing, you have obviously branched out from those original beers into others, and into hard seltzers, and beer mustards, and so on. As you’ve expanded your portfolio of what you offer, how do you maintain identity? I am assuming a lot of it is through branding, as the packaging of Ska Brewing has remained fun and lighthearted pretty much the entire time I’ve been buying it.

Oh God, that’s something I think about a lot because I think one of our superpowers is that we’re authentic. The music, the comic books, the irreverence, the sense of humor–it’s all just being part of who we are. To put it another way, if we were to sell out to, say, a big brewery–Budweiser or something–not that that would ever happen, but if that would happen, I think it would be so obvious so quickly that the soul was ripped from this brewery and I think it’s just because we just be ourselves. 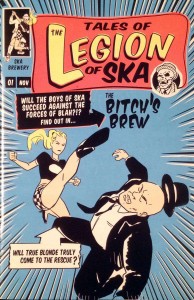 You know, when we first started we wrote a comic book and that’s where a lot of our characters and earlier names and stuff come from. We didn’t illustrate it for many years, but we did do piecemeal illustrations from the comics, even though the whole thing hadn’t been illustrated, it had been really cool, so our early packaging–our bottles and our six packs and our labels–were all panels out of that comic book.

We’ve actually put out the comic book, which told the story about us–the three of us who actually own the brewery, myself, and my partners, Matt [Vincent] and Bill–and then our heroine, who is the True Blonde girl and her name’s Lana Lovibond. We get together with all our friends who are in ska bands and friends that helped us in the early days, just helping with volunteering to package and stuff. And we ended up battling Mr. Pinstripe, who is the CEO of Rotgut International Beverage Corporation. It’s very much a David versus Goliath story and we prevail in the end, but it’s not the end of the story. It’s just that battle.

We’ve just kind of stuck to it. It’s like we’re living inside this current issue that’s just telling the story of how we imagine ourselves, brewing beer and listening to music and drinking beer for a living, traipsing through life, page by page having the time of our lives. It would be really hard to replicate or do that, or even do any kind of legitimate marketing with those foundations, if it weren’t truly who we are.

So I get worried, you know? I’m sitting here thinking, “Are we keeping our identity? Are we still the people we always were? Did we do something that was ridiculously corporate at some point along the way?” and I kind of look at it like, I went to a couple of big festivals or concerts this summer that had punk rock bands. I went and saw the Vandals and Fear and a bunch of other bands and I’m like, “Man, those are bands I used to see in small theaters or even bars when we were in high school and college and now I’m seeing them with thousands of people,” and I’m like, “I still love it.”

It’s still a blast, but why are these guys on this big-ass stage with thousands of people. Did they lose it or sell their soul somewhere along the way? At the end of the day, I don’t think they did. I just think there are more people tuned into it. It’s easier to find out about stuff like that. And I think that analogy is a parallel thing with us at the brewery: we’d grown, but I don’t think we changed.

Ska Brewing is available at liquor stores throughout Kansas and Missouri. Their latest beers, Euphoria Pale and Mexican Lager Dark, are out now.