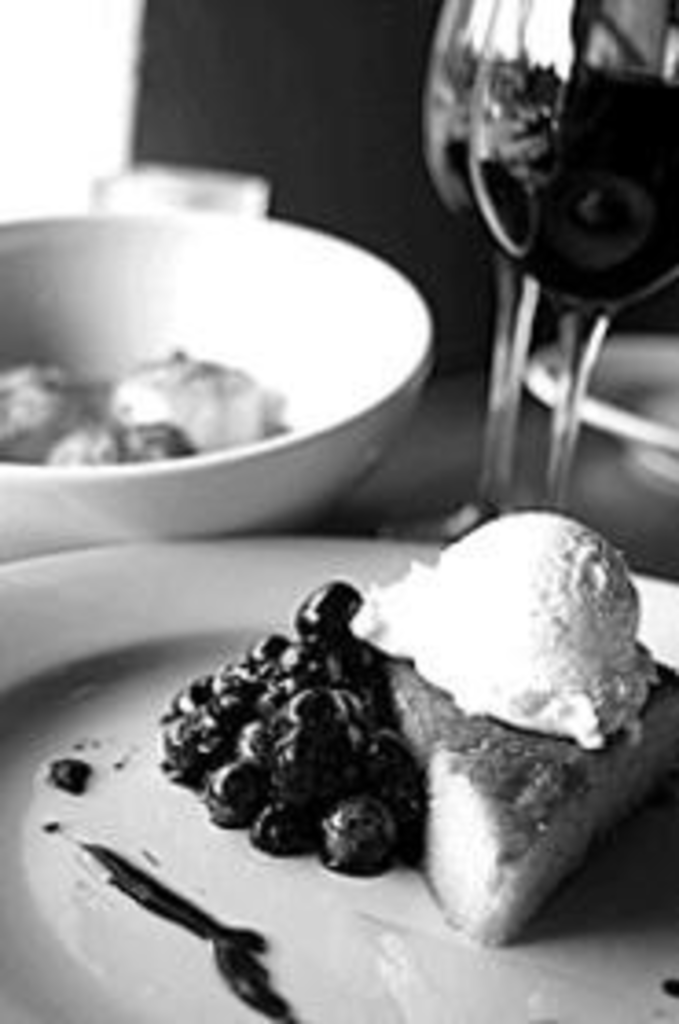 On this summer’s beefcake blockbuster Troy, Odysseus (played by British actor and former welder Sean Bean) gets short shrift because much of the Greek action hero’s adventures — according to Homer, anyway — happened after the fall of Troy. War may be hell, but poor Odysseus actually had a much tougher time just getting home, thanks to near-fatal confrontations with angry gods, a Cyclops, a hurricane and the enchantress Circe — a “dread goddess” with a habit of inviting guests to dinner … and then eating them.

So it seems strange that Nathan Feldmiller and Jonathan Phillips chose the provocative name Circe for their 2-month-old restaurant on 39th Street. It’s like opening a shop that serves meat-filled pastries and calling it Sweeney Todd’s. But Feldmiller was attracted to a different facet of the Circe legend: “She turned the sailors on Odysseus’ ship into pigs,” he says, “but she fed them really, really well.”

I can personally attest to walking into the storefront space one night as a chubby human and immediately turning into a pig without the benefit of sorcery. All it took was a plump seared scallop dripping with an emerald-green sweet-pea sauce.

Feldmiller and Phillips are literate, well-educated young men, so it wasn’t much of a stretch for them to find a restaurant name with a connection to classical literature. But it wasn’t Feldmiller’s reading of Homer that lured him to Circe; rather, it was his reading of New York Times food critic Mimi Sheraton. “I found a used copy of her 1964 book The Seducer’s Cookbook,” he says. “And when she wrote about food being steeped in mystery, there was Circe.”

That said, there’s nothing terribly mysterious about the restaurant, unless one wishes to ponder (as I did) why the two chefs chose to open a sophisticated, expensive, contemporary American bistro in a neighborhood dominated by casual dining venues. With the exception of the moderately formal Macaluso’s a couple of blocks to the east, there hasn’t been a truly upscale establishment on Restaurant Row since Café Allegro and Hannah Bistro left the ‘hood.

Phillips contends that the restaurant isn’t that upscale. “Not in price anyway, but definitely in the dining experience, the food quality and the wine list,” he says. “And the neighborhood has, historically, supported upscale restaurants.”

My friend Cynthia, who lives nearby, believes this stretch of 39th Street is going through a transition. But, I told her over a splendid lunch — at more than $50 for two people without booze, it was assuredly upscale in price — this neighborhood is perpetually in transition. For every beloved restaurant that closes (Café Lulu, Veco’s, the Blue Nile), another place comes along to fill the vacuum. This particular space spent the first part of the last century as Frankenstein’s Dry Goods (seriously). More recently it was occupied by the lovably cheap, brazenly tacky Sun’s Chinese-Korean Restaurant.

Feldmiller and Phillips gutted the space and created a spartan, butter-colored dining room that Cynthia called “classy but not snooty.” She might have been putting on a few airs of her own, though — she was eating a $14 hamburger at the time, which I found scandalous, if not particularly snooty. Crafted from a half-pound of American Kobe beef (pricey because it’s richly marbled with “good” fat, whatever that is), the burger was served on a brioche-style onion bun and looked far more dramatic than it tasted. I snagged a bite and found it to be beautifully beefy (unlike gristly diner burgers) but not extraordinarily juicy or tender.

Our server, restaurant veteran Bill Johnson, had suggested that I try the more modestly priced fish and chips. They arrived fried to a light and airy crunch alongside a mountain of thin, crispy french fries. Johnson is a focused professional when he wants to be, but he flips into campy mode at the slightest provocation. After lunch, I ordered the day’s featured dessert, a frozen but creamy hazelnut parfait. “Don’t you love the word parfait?” he said gleefully. “It rhymes with gay!”

It also rhymes with sir-say, which is what some local diners insist on calling the place. (The correct pronunciation, if anyone cares, is sir-see.) When I returned for dinner with my friends Bob and Rich, our willowy waitress, a blond art historian named Tuesday, served us with much more decorum. That was a good thing, because Bob and Rich both had strong reactions to the dining room: Bob thought it was noisy and pretentious, but Rich liked the “minimalist décor and the moody lighting.” Bob’s mood darkened at the arrival of the amuse-bouche, a tiny cup of visually blah “tomato bread salad” that was nearly impossible to spoon up. And he scowled when I vetoed his ordering the $31 Kobe strip steak — that was just too much mon-nay. Sulking, he ordered the much less expensive hanger steak, a coarsely grained slab of beef cut from the belly. “It tastes weird,” he whined.

Rich and I ignored him; we had all greatly enjoyed the appetizers, including those fabulous seared scallops and a quivering lump of seared foie gras nestled against a swirl of amber caramelized onions. Tuesday had served the foie gras with crostini, but we much preferred pastry chef Anna Sara Morrow’s excellent crusty bread. And Bob had loved the tender baby beets on his summer salad, which also was heaped with pickled onions and blue cheese. But it was my crab and apple salad that had blown us all away: a dainty cylinder of sweet Dungeness crab and tart, grated Granny Smith apples, topped with a topaz-colored crown of beet-tinted apple.

Dinner was only a bit less worthy of applause. Rich’s seared pork chop was one of the briniest I’d ever tasted, but because he’s a gentleman he insisted that he liked his meat salty and continued to nibble at it bravely. My pan-seared duck breast, however, was superbly smoky and flavorful, having been cold-smoked before it was tossed in the pan. The only “weird” flavor I could detect in Bob’s hanger steak was a hint of olive oil, which was fine with me.

The elaborate presentation of the dishes was a notable contrast to the simplicity of the room. Feldmiller and Phillips understand that it’s not enough to serve fresh and tasty food — there has to be an element of show business as well. The acoustics are daunting, particularly on a really busy night; I didn’t have much trouble talking to my own dining companions, but it was nearly impossible to eavesdrop on the conversation at the next table.

Rich, Bob and I talked politics until we were all bored with the subject. We found much more inspiration in discussing Morrow’s gorgeous desserts, which even lightened up Bob’s black mood. He adored the silken triangle of flourless chocolate cake, and Rich was easily seduced by a soft shortcake flavored with lemon verbena and topped with supple peach slices. But be warned: A diner can go absolutely nutty over the decadent dessert that Morrow calls Almond Four Ways, a sexy sampling of a custardy almond pudding in a flaky tart shell, a puff of almond cream, a scoop of delicately flavored almond-milk ice and crunchy candied almonds.

There is something bewitching about the Circe experience, something more potent than just the food, the flickering votives on the table, Tuesday’s flaxen beauty or Bill’s poetry skills. But if I concentrate too hard on figuring out what it is, I might break the spell.