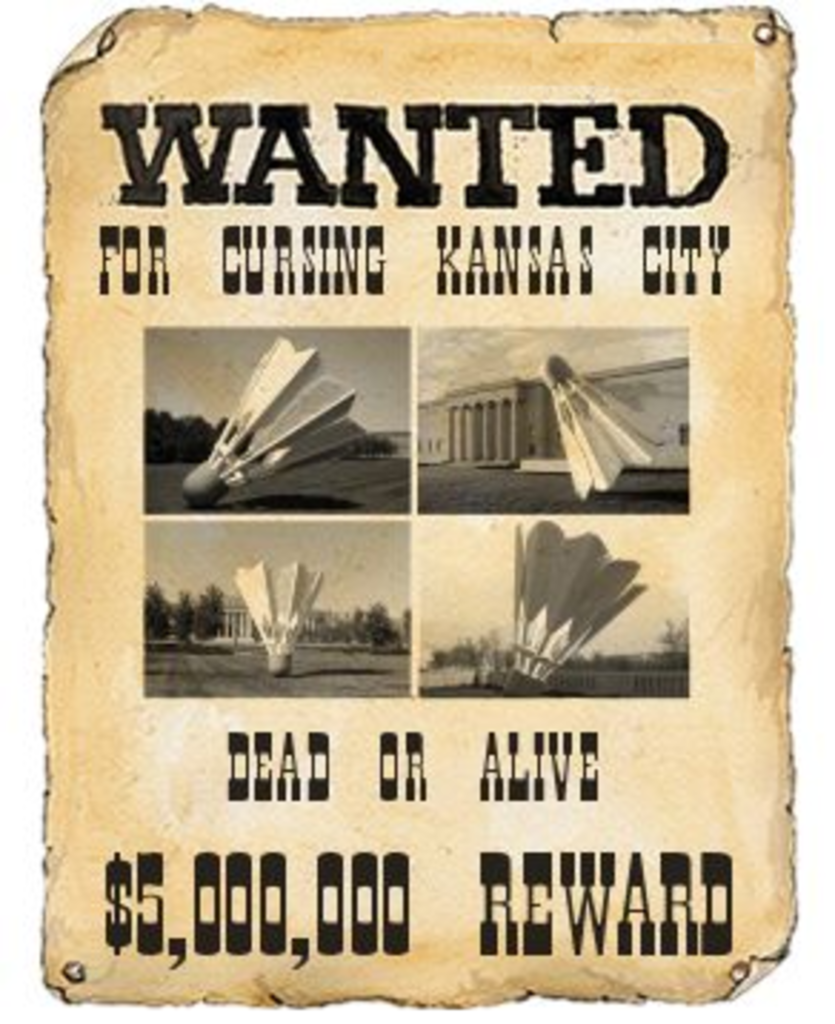 Chiefs fans are still trying to cope with the one-point loss to the Indianapolis Colts in Saturday’s AFC Wild Card playoff game. Some fans  are grasping harder than others to rationalize a second-half implosion in which a 28-point lead evaporated.

Poor clock management? A rash of injuries? Outperformance by the opposing team? Not hardly: It’s the Curse of the Shuttlecocks.

In a 2008 story, Kansas City Star sports columnist Sam Mellinger attributed the discovery of the curse to then-Kansas City Museum director Christopher Leitch. Here’s some of the rationale, as outlined by Mellinger:

* In the three seasons prior to the Nelson-Atkins’ commissioning of the Shuttlecocks, the Kansas City Chiefs won three playoff games.

* In the 10 baseball seasons prior to the Shuttlecocks’ arrival, the Kansas City Royals boasted seven winning seasons and a world championship.

* And in the 29 combined seasons since the Shuttlecocks were installed (as of the 2008 story), the Chiefs haven’t won a playoff game. The Royals had only one winning record.

Compare these to what some might call more legitimate sports curses – the Bambino, the curse of the Billy Goat, the Madden video game and Sports Illustrated cover curses – and the Shuttlecocks theory is, to put it gently, even more far-fetched.

The idea of the Curse of the Shuttlecocks gained a little traction after the story was published but faded into oblivion – until the Chiefs’ heartbreaking playoff loss in Indianapolis.

Now, some people are trying to make the Curse of the Shuttlecocks a bona fide movement. Kansas City native Jake Dyer started a petition on change.org to remove the Shuttlecocks, and, as of this writing, 98 people had signed it.

“Chiefs and Royals fans, I urge you to take a short moment to support this petition to remove the infamous shuttlecocks from this great city we call home,” he wrote on the petition. “For those of you that do not know, these shuttlecocks are cursed.”

Are they, really? Dyer says yes.

“When I heard this curse, it seemed slightly overreaching; however, I couldn’t give anybody another explanation for many woeful playoff losses and uneventful seasons,” he says.

According to the comment thread on Dyer’s petition, he’s not alone in blaming a public art installation for a long-running streak of sports woes. 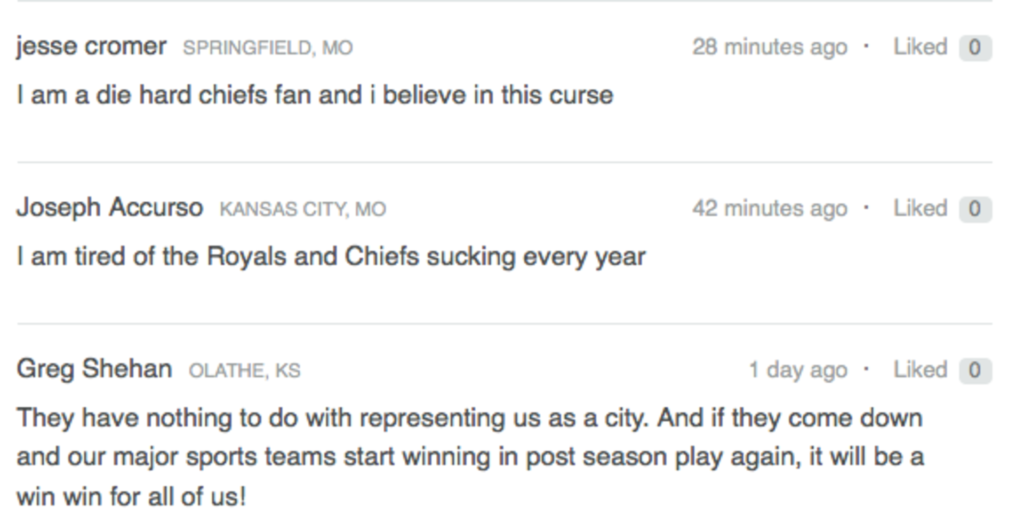 The curse also has its own Twitter hashtag (a true mark of legitimacy): #CurseoftheShuttlecocks. 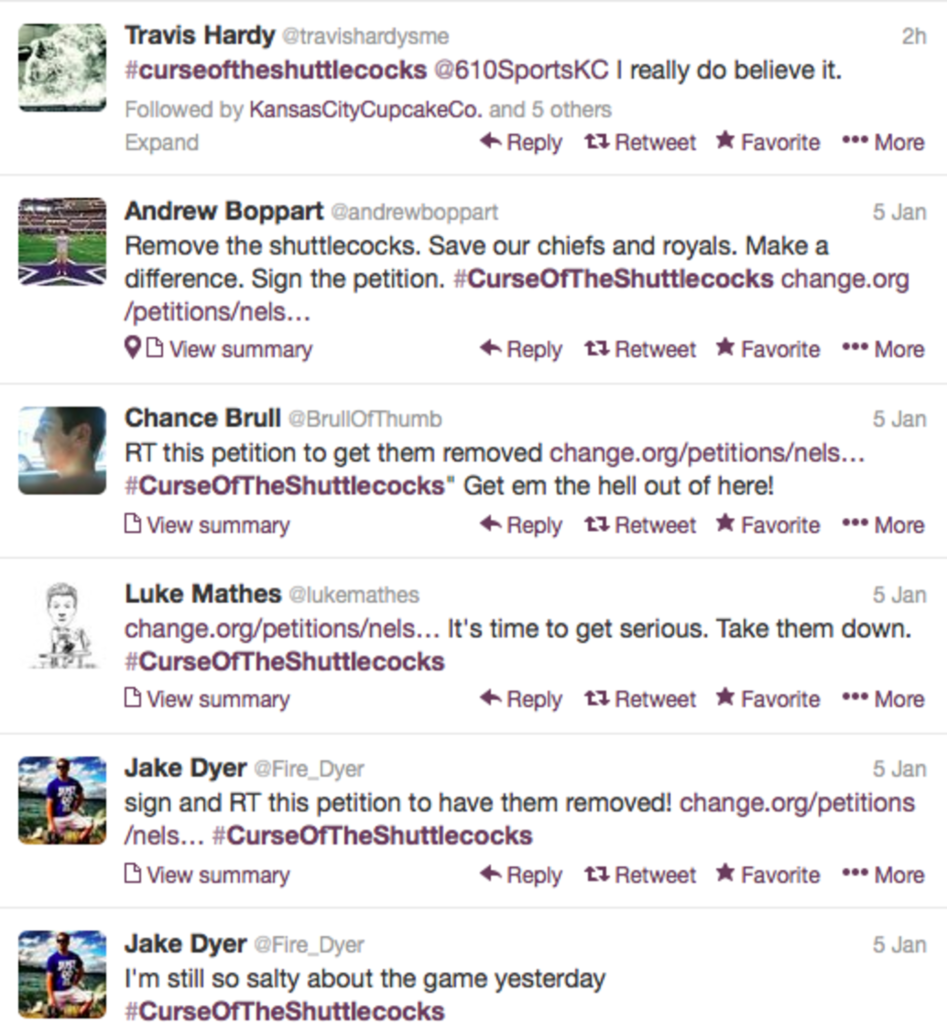 Not everyone is ready to blame a public art installation. Adam Yarnevich has been a Kansas City sports fan since childhood and is known as Sporting Kansas City super fan “Brisket Bob.” In his opinion, the Curse of the Shuttlecocks is a scapegoat – and not a very good one.

“Sports fans generally need a reason to explain an unfortunate event,” Yarnevich says. “There has to be a reason for why all things happen. And when something as unbelievable as what we all witnessed on Saturday occurs, we come up with a villain just as unbelievable. In this case, it’s the big badminton things on the front lawn of the Nelson.”

If this curse exists, how do you explain Sporting Kansas City’s meteoric rise to success, which culminated in the team winning the 2013 MLS Cup?

Seems that pesky state line – often blamed for things like bitter sports rivalries and an ongoing economic-development border war – might actually serve as a curse-blocking barrier.

If you ask Yarnevich, the petition for the Shuttlecocks’ removal signals a far greater problem than athletic performance.

“I’m more intrigued with Kansas Citians and their need to petition to remove public pieces of art from outdoor places,” he says. “Seems like that is becoming a streak as well. But, hey – whatever gets people in this town talking about art.”

So how does Dyer respond to people who think his petition is far-fetched?

“If you are a Chiefs or Royals fan, even if you think it’s ridiculous, are you opposed to removing the Shuttlecocks just to see if it works? If it doesn’t, then call me ridiculous all you want. If it does, I’ll be the one laughing.”

And as news of this shaky theory spreads, he won’t be the only one.