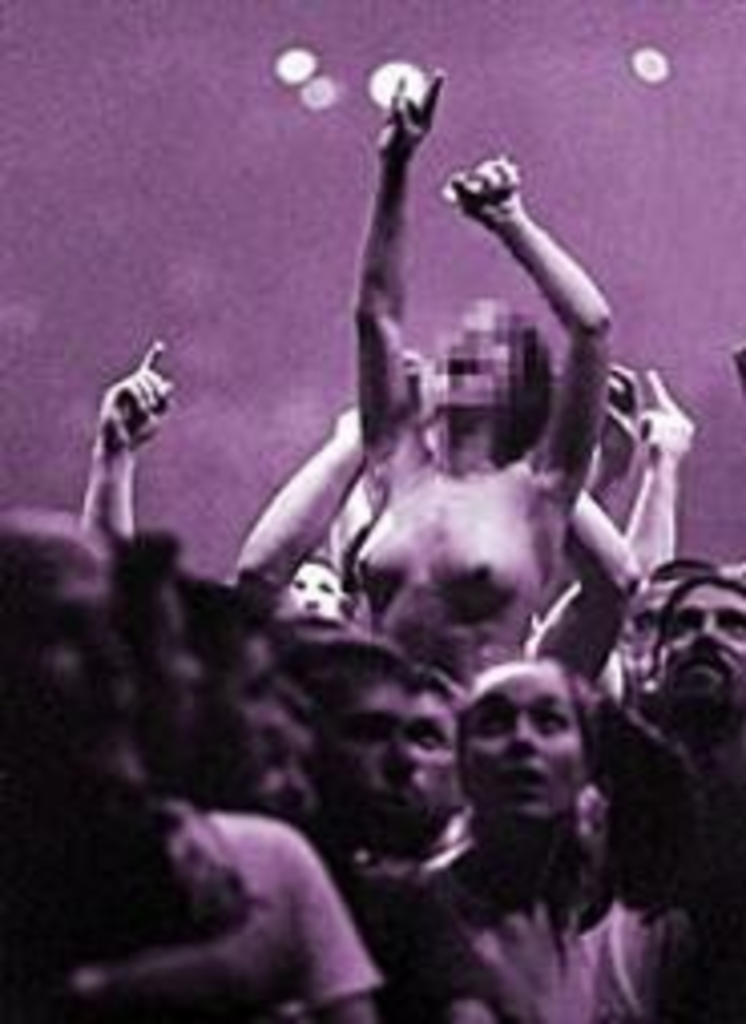 Show Us Your …The quality of stage banter has dropped to an all-time low, somewhere between the script for the average UPN comedy and a monologue on race relations delivered by John Rocker or Reggie White. On-stage declarations range from shameless baiting for applause (“Do you guys like to smoke the weed?”) to faux-rebellious expressions of disdain for pop-culture icons (“Fuck the Backstreet Boys,” or, if at a punk show, “Fuck that Korn shit”). Worst of all is the new wave of sexist commentary from bratty “punks” and rap/metal jocks, which has marked a lamentable return to the “Show us your tits” days of Def Leppard and Ratt. Yes, the “Cherry Pie” mentality is back.

The recent Poison concert featured middle-age mothers baring their breasts alongside their daughters, a disturbing sight but not quite as jarring as seeing the training bras come off at the kiddie-packed Blink-182 show. Surprisingly, the night’s stupidest banter came not from Blink-182, which registered appropriate disgust at underage nudity and instead reveled in innocuous fart jokes, but from openers Fenix TX, whose singer, Willie Salazar, informed the glassy-eyed 12-year-olds in attendance that he deserved a “gold medal for fucking.” Next, Salazar claimed that getting naked would be the punk thing to do in an attempt to goad the preteens into doffing their shirts, then prefaced the tune “Big Cock” by claiming the audience was composed solely of guys with really, really big penises and girls who love really, really big penises.

Bad as this show was, it couldn’t compare with the Bloodhound Gang/Nerf Herder show in Lawrence on May 10. Nerf Herder, ostensibly a mild-mannered nerdcore band, forever tainted the memory of “Nosering Girl” by inviting a parade of underage girls to simulate grinding sex on a fan plucked from the crowd during this song. Singer Parry Gripp also successfully got ambiguously teenage girls to “Show us your tits,” which caused excitement for affection-starved concertgoers and nausea for many others. The Bloodhound Gang also reveled in a clothing-optional atmosphere, although the group eventually became annoyed by the teeny-bopper breast-baring and angrily requested a more mature example of the female form.

Much of the flashing that has taken place at this year’s big concerts was not band initiated. At the Korn/Staind concert in April. However, between sets, the apparently irresistible urge to incite cheers from sweaty metal guys compelled dozens of young women to lift their tops. A similar scene took place at the Deftones show, as a backstage-pass-wielding member of the road crew orchestrated a one-woman peep show. This young lady exercised control of the situation, pouting for applause before lifting her shirt up to her neck.

Often, the combination of microphone amplification and a summer-festival crowd leads even noncelebrities to request groupie-style favoritism. Last year’s Ozzfest featured the “Bust-A-Tittie” game, which invited patrons to throw darts at balloon breasts; an emcee came forth between sets to produce “the rules,” one of which was “Show us your tits.” At Social Chaos, a disappointing old-school punk package tour, the emcee provided an unwelcome link to such new-school bands as Blink-182 by both placing the groups on a rock-star pedestal (he hosted contests, with the winner getting backstage passes so he or she could “get autographs”) and engaging in depraved ogling (after one punk lass lifted her shirt to win the pass, the emcee stamped the all-access sticker on her breast). D.R.I., one of the bands on the bill, delivered a straightforward set, but in April this aging thrash outfit refused to play until a woman got half-naked — a ludicrous request at a half-full club with only a handful of female fans.

This direct approach is fairly rare, with only especially raunchy louts, such as Limp Bizkit’s Fred Durst and the deplorable Pimpadelic, demanding partial nudity. Also uncommon are rude requests from aggressive male fans toward unsuspecting females, although a volatile combination of artist and mob mentality could easily result in such a scene. For example, at last year’s Woodstock, Spin reported that women were constantly surrounded by groups of men and taunted mercilessly if they refused to respond properly to “Show us your tits” or even more crass requests. Given such an atmosphere, it seems far from coincidental that sexual assaults later occurred at this ill-fated show. What is rather surprising is the fact that many concertgoers responded to these ghastly incidents by saying, in so many words, “They knew what to expect.” It’s frighteningly similar to the “asking for it” rape dismissal, in which the victim is blamed because of her choice of clothing, occupation, or, in this case, entertainment. It’s also sobering that concertgoers seem resigned to the fact that women who attend hard-rock shows will be harassed and groped.

The deck is already stacked against female fans. Many large venues won’t allow purses through the gates, forcing women to carry personal items in their hands, and the unforgiving mosh pits all but prohibit women from getting close to the action. Eventually, women might decide that it’s not worth the trouble to see, say, Korn, and as much as the macho men in the pit and on stage might think an all-boys’ club sounds appealing, they’d soon regret the paucity of estrogen. After all, it’s no fun for these guys to shout “Show us your tits” at their already shirtless male counterparts.