Shop Girl: Unexpectedly wrapped up in the Lenexa Public Market 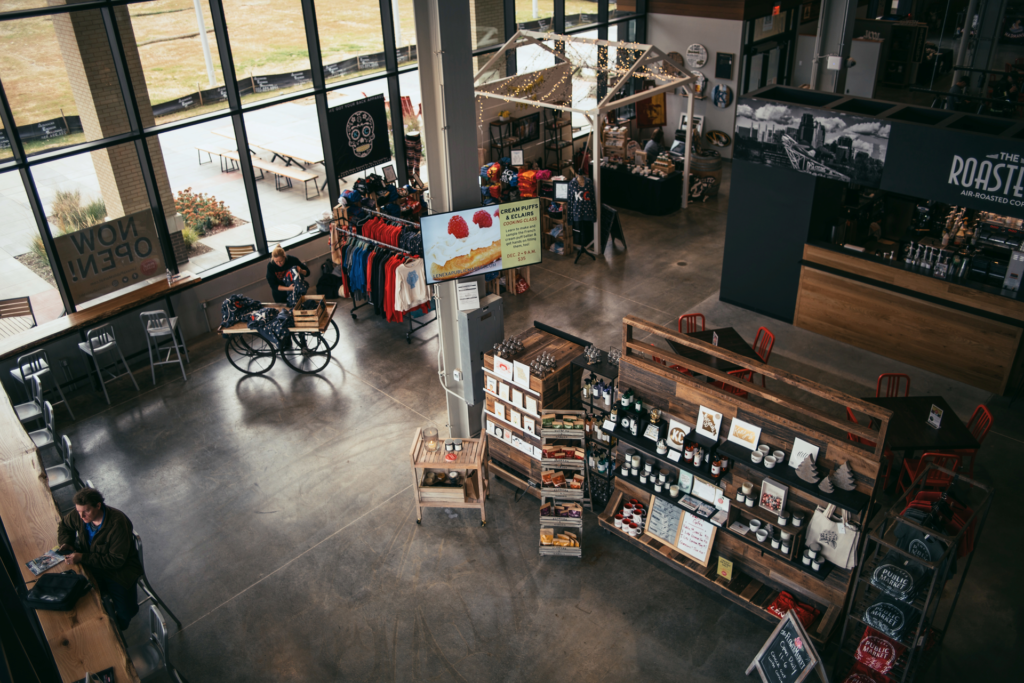 I never thought my love of homemade tamales would take me deep into Johnson County. But that is where you find Red Kitchen Tamales, and the moment I heard about the place — about the cheesy goodness, about the long lines to snag one before the day’s supply sold out — I knew I had to get there. Red Kitchen’s core product has already proved popular enough for owner Alejandra De La Fuente to quit her day job and devote herself full time to her corn husk–wrapped creations.

For someone living in Northeast KC, the drive to 87th Street and Renner Road feels like something of a journey, the kind of trip for which you maybe bring along some pemmican. On the afternoon I filled my car with gas and pointed myself south, I couldn’t recall even having been to Lenexa before. And if I was forgetting a long-ago visit, the sights failed to jog my memory as I neared my destination. Seemingly everything was under construction, with a new branch of the Johnson County Library and a recreational center among the additions in progress at the Lenexa Civic Center, a 200-acre project that has taken decades to come to fruition. It was new enough to confound my GPS.

At the center of it all is the Lenexa Public Market, which occupies the same building as City Hall. Though it’s located in the heart of an archetypal suburb, the market has a surprisingly urban feel — kind of like an indoor version of downtown’s City Market, minus the fresh produce. All of the vendors are locally owned, offering a range of goods that includes T-shirts, candles, soaps and such foodstuffs as pastries, pizza and ramen. There are outposts of favorites Foo’s Frozen Custard and the Roasterie. It is an ideal venue to order a refillable coffee and spend a few hours just watching the people. 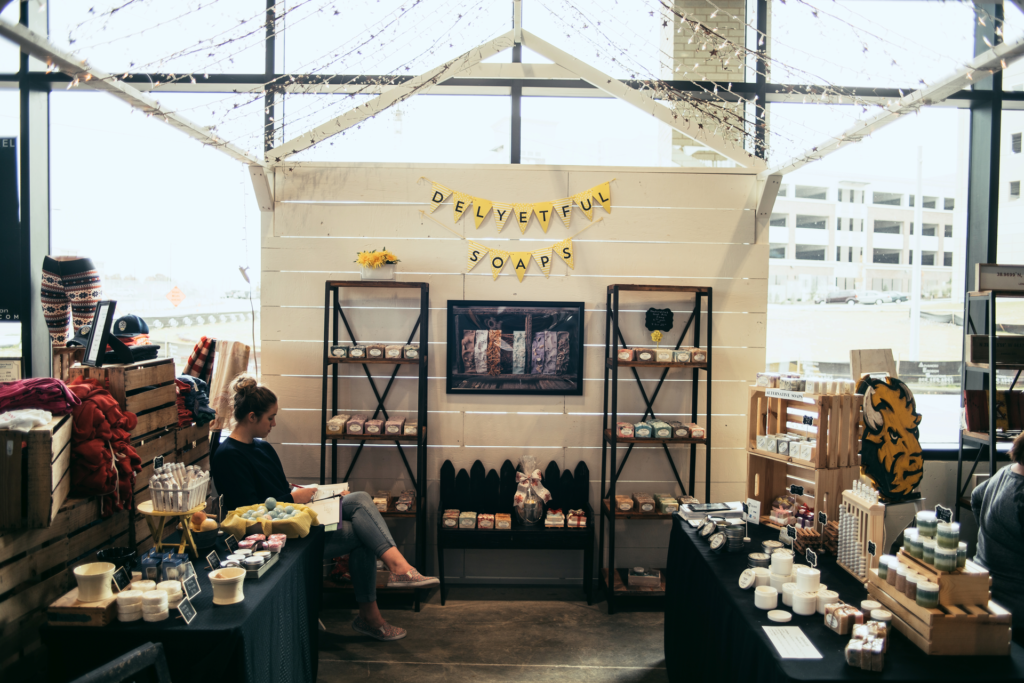 When I arrived, business looked a little sleepy, with just a few folks browsing the booths and munching on skewers from Chewology Gyoza and Kushiyaki, a Japanese restaurant that I found immediately intriguing simply for its mouthful of a name. I warmed up with a stroll through the candles by Pickwick, some of them holiday-themed and saddled with names like “Holiday Spruce” and “Dickens.” I know it has long been fashionable to complain about retail’s overeager seasonal switchovers, but for me, the day after Halloween is the latest you should begin adorning the world in garland and twinkle lights. Everyone operating at the market seemed just as enthusiastic.

Instead of gifts for others, though, I was snatching up stuff for myself. I wanted to buy each super-soft, pre-shrunk T-shirt and hoodie I touched at We Got Your Back Apparel, which puts its own spin on trendy KC pride gear. Its Chiefs, Royals and KU tees utilize a design that resembles a Dia de los Muertos sugar skull, with a football, a baseball or a basketball in the center of its forehead, like a third eye. 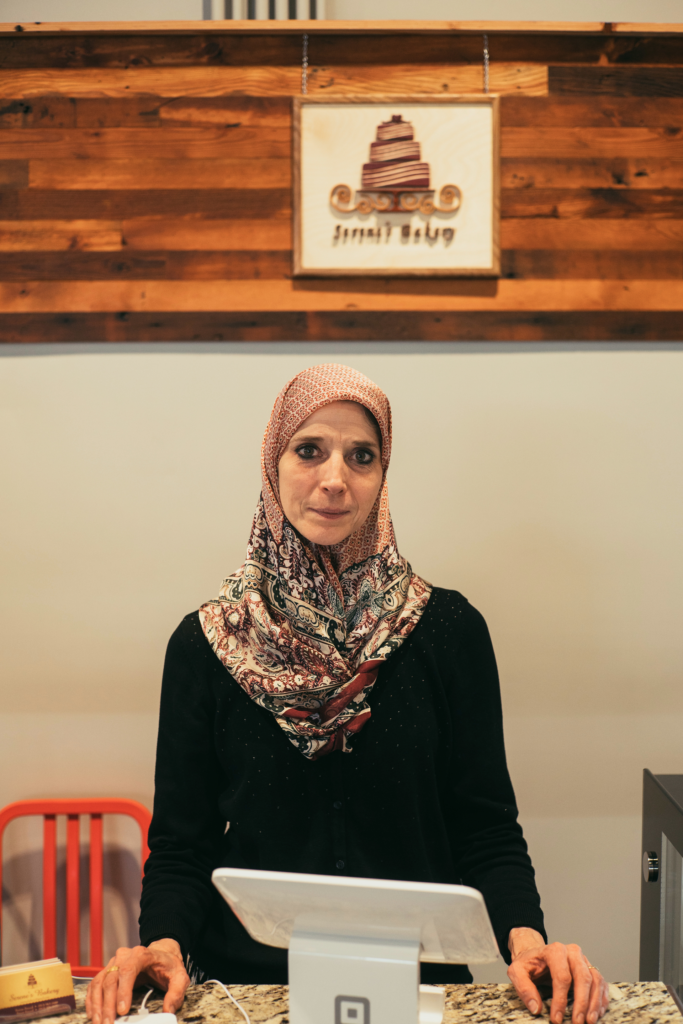 A couple of booths down I found Serene’s Bakery, co-owned by mother-daughter duo Serene and Susan Sayyed. Serene was working behind the counter, where I was drawn helplessly by what I’d spied in the case: a fat pumpkin roll stuffed with cream cheese. I purchased one to go, and she pulled it out already packaged, as though she’d been expecting me.

“Normally it’s a lot busier right now,” she told me, explaining why my pumpkin roll was ready to, well, roll before I’d even ordered it. “Today is a slow day.”

I asked her how business had been overall, and she said things have been pretty good. She gestured toward the construction outside the window and described everything going up around the market — an aquatic center, apartments, that library. She said that some slow days now would end up being worth getting through.

“And the tamale lady is going in next door,” she added.

Indeed, the neighboring booth sat empty, awaiting its tenant. Apparently I’d overlooked one important detail: De La Fuente had been serving her tamales just one day a week in the kitchen upstairs, where the market also hosts regular cooking classes and workshops.

Thwarted but not unhappy, I shuffled over to Chewology and ordered an ahi tuna skewer. The tender cubes of fish were satisfying enough that I didn’t feel deprived. If anything, I felt fortified for my next drive to Lenexa, now assured.