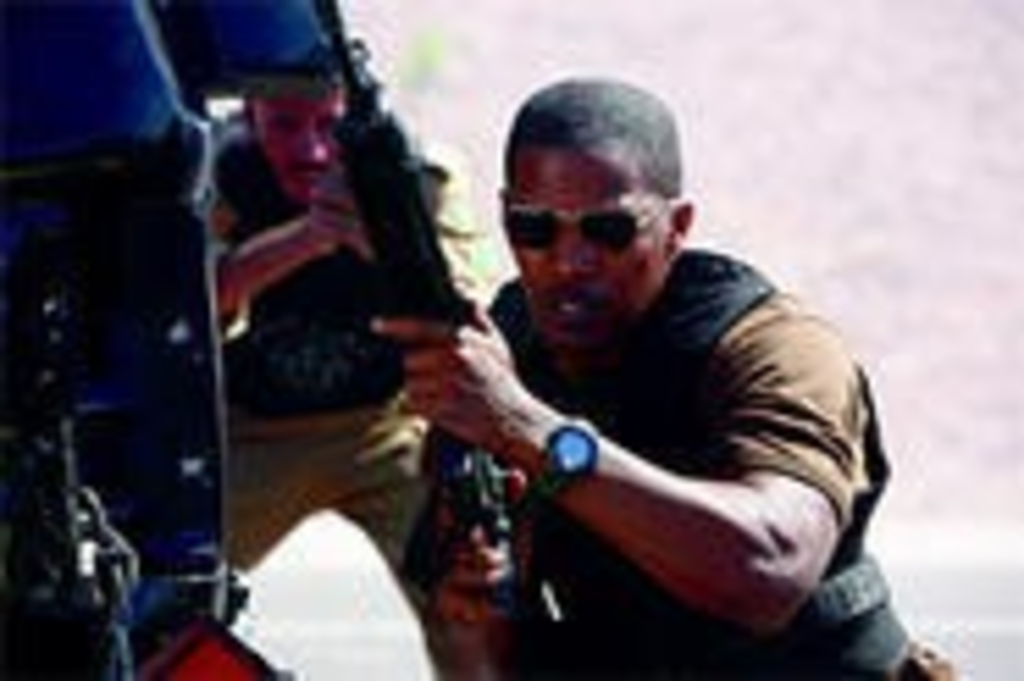 The Kingdom is the first film from Peter Berg since the actor-turned-director’s Friday Night Lights, which spawned an acclaimed, if struggling, franchise for NBC. There will be no small-screen spinoff of The Kingdom — there are too many corpses lying around to populate a sequel, much less a series. Besides, it would be redundant: The Kingdom is essentially C.S.I.: Riyadh, starring Jamie Foxx in yet another movie that his Oscar statue will watch with shame.

The Kingdom is being released in a season heavy with dramas critical of the Iraq war, chief among them Rendition, a Reese Witherspoon-Jake Gyllenhaal vehicle about the imprisonment of innocent Arabs; Brian De Palma’s Redacted, about crimes committed by U.S. troops; and Paul Haggis’ In the Valley of Elah, about the toll that war takes on child-soldiers sent to slaughter. On some weird level, The Kingdom wants to be treated as seriously as those entries: There is a pre-opening-credits animated sequence that attempts to explain the United States’ dependency on Saudi oil in less than two minutes and includes a cartoon plane flying toward the World Trade Center to remind the audience that most of the hijackers on September 11, 2001, were Saudi Arabian. Berg has enough sense to cut to black before impact.

But aside from the occasional murmured reference to Iraq and the so-called war on terror, The Kingdom is little more than a run-of-the-mill kill-’em-all fuck-you in which the good guys (which is to say, the white guys) spend two hours tracking down the bad guys (which is to say, the brown guys). It intends to boil the audience’s blood right away by blowing up dozens of U.S. citizens — all oil workers, naturally, living in a Saudi compound — at the hands of jihadists. There are countless images of dead children and their grieving parents; Berg, whose directorial style could best be described as anxious, wants us demanding our pound of flesh before the end of the first reel.

In comes the cavalry, an FBI team consisting of commanding officer Ronald Fleury (Foxx) and a cast of other replaceable parts whose only definable tasks are to shoot and get shot at. By the time Jason Bateman’s character finally gets kidnapped and Jennifer Garner picks up a machine gun and starts looking for the kidnappers, you realize the point: These actors are playing cowboys and Indians for million-dollar paychecks, trying their best not to look as stupid as they come off in a movie bereft of a brain.

The bomber is identified early on, so the movie’s one-track mind is only about finding him. At least every episode of Law & Order contains one gotcha twist; not The Kingdom, which is Berg and writer Matthew Michael Carnahan’s attempt at finding Osama bin Laden — or his cinematic counterpart — and stick a machine gun up his robe-wearing ass. Here’s one new movie set in the Middle East that Bill O’Reilly can get behind: If he’s brown, says this macho manifesto, gun him down.

There is, of course, one good Saudi here: Ashraf Barhom as the police chief who frowns upon his superiors’ taste for torture and welcomes the Americans, while others denounce their arrival as imperialist interference. But for all the affection the filmmakers claim to have for their pedestrian hero, he’s little more than a sacrificial lamb — a noble pawn who quickly finds that, to the Americans, he’s no Jason Bateman.

The Kingdom is bloated and dumb — the kind of movie in which Jeremy Piven shows up as a government lackey who might as well be named Ari Gold, and Frances Fisher appears as a Washington Post reporter who does Foxx a favor that might be considered unethical were it not so unbelievably confusing. It’s all so much noise and nonsense, a hateful waste that adds nothing to the dialogue about war, loss, sacrifice and intolerance. And the last two minutes are downright execrable — an excuse masquerading as an explanation for the ever-growing pile of corpses in movies that pretend to say something real about life and death.