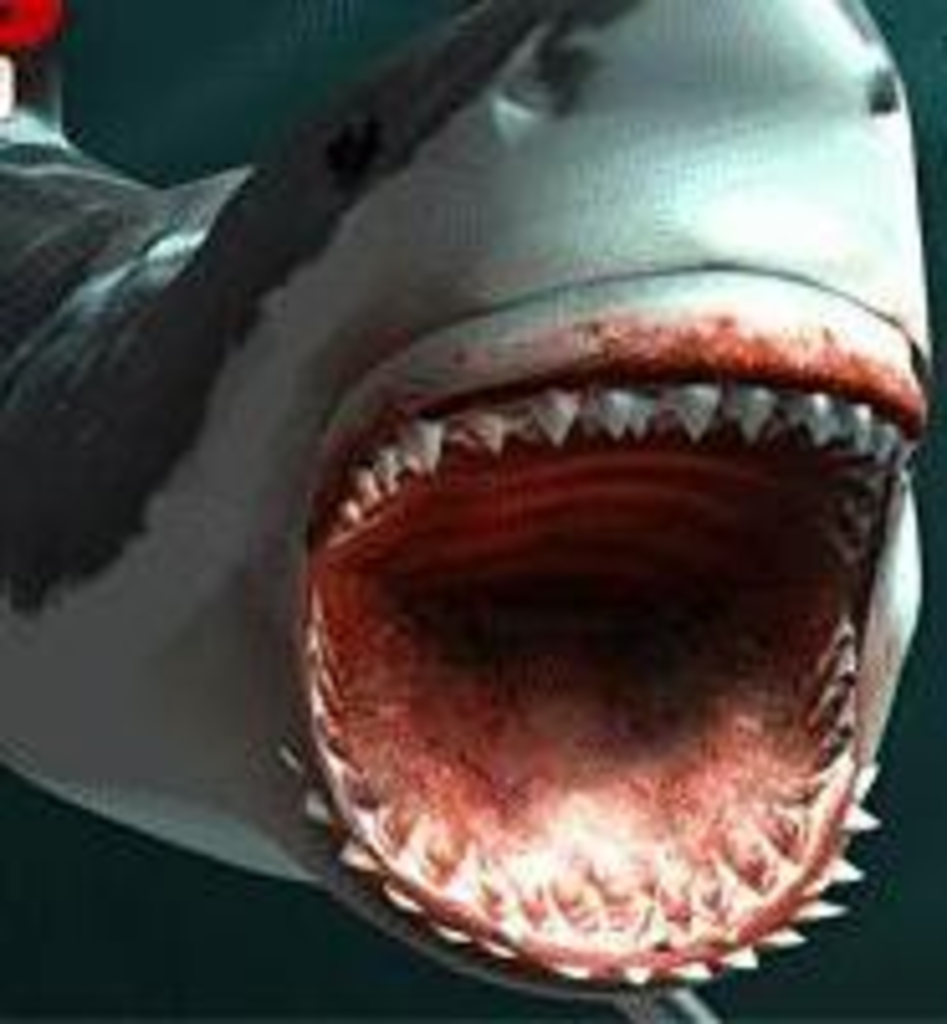 Not long ago, videogames were about collecting coins and rescuing the princess. Now you’re more likely to gun her down in a drive-by. Or eat her alive.

Welcome to Jaws Unleashed<. You’re a pitiless great white, hungry for human flesh. Unfortunately, this absurd and aimless chompfest can’t decide whether the titular shark is a killing machine or . . . a concerned environmentalist?!

The game was developed by Appaloosa Interactive, the same company that gave us the entertaining Ecco the Dolphin, a cute puzzle-solving romp beneath the waves. While Ecco was critically hailed, it didn’t exactly swim off the shelves. So Appaloosa went back to the drawing board and came up with Grand Theft Atlantic Ocean.

As Jaws, you’ll devour anything that swims. At one point, you even get stuck in Sea World, where you turn Shamu into whaleburger. Yummy.

But every apex predator knows that the sweetest chum is human. Lucky for you, plump and unsuspecting beachgoers abound. You’ll devour surfers, boaters, and scuba divers, leaving bones and blood in your wake. You can even enter a lifeguard-eating challenge and live out the Baywatch episode of your dreams. (Try the leg of Hasselhoff — it’s simply to die for!)

Unfortunately, once you tire of noshing on man giblets, the game’s flaws float to the surface like turds. Hinky controls and camera work bedevil you as you target a baby seal for execution. The camera wobbles wildly, drifting into a bad spot just as a giant squid attacks. And you’ll often get stuck in digital seaweed, lending new meaning to the phrase “chewing scenery.” The only thing you’ll unleash is the reset button.

Just when you think it’s safe to go back in the water, it gets worse. Jaws has one of the most inane stories in recent memory. Part of the plot is cribbed from the movie: The mayor of Amity Island refuses to cancel waterfront Fourth of July celebrations, even though people are being eaten like Jujubes by a rapacious evolutionary freak. (That’s you!) It has something to do with money.

But wait! The mayor is in cahoots with a soulless corporation engaged in all manner of environmental exploitation: drilling for oil, underwater mining, dumping toxic waste — just picture Dick Cheney’s idea of a good time. Who will stop these pirates?

At this point, the story descends into lunacy. See, the great white shark, infamous scourge of the high seas, is also a card-carrying member of the Sierra Club. It’s up to you to take out that oil refinery.

Which means that Jaws will have to forgo the use of his rows of razor-sharp teeth and brutally whipping tail to instead prowl the sea floor for that most humdrum of game clichés: the explosive barrel. Because Jaws lacks arms, your suspension of disbelief will have to work overtime. Get this: Jaws must delicately pick up each barrel with his teeth, then hock it like a TNT loogie.

And that bites. At times you’ll actually feel like a finned monster, but any verisimilitude is undermined as soon as an explosive barrel appears. You’re no longer a denizen of the deep. You’re just a bored gamer.

But that’s what happens when you try to turn a mindless predator into a problem-solving eco-warrior. The lesson? Stay true to yourself — and please enjoy another human torso.