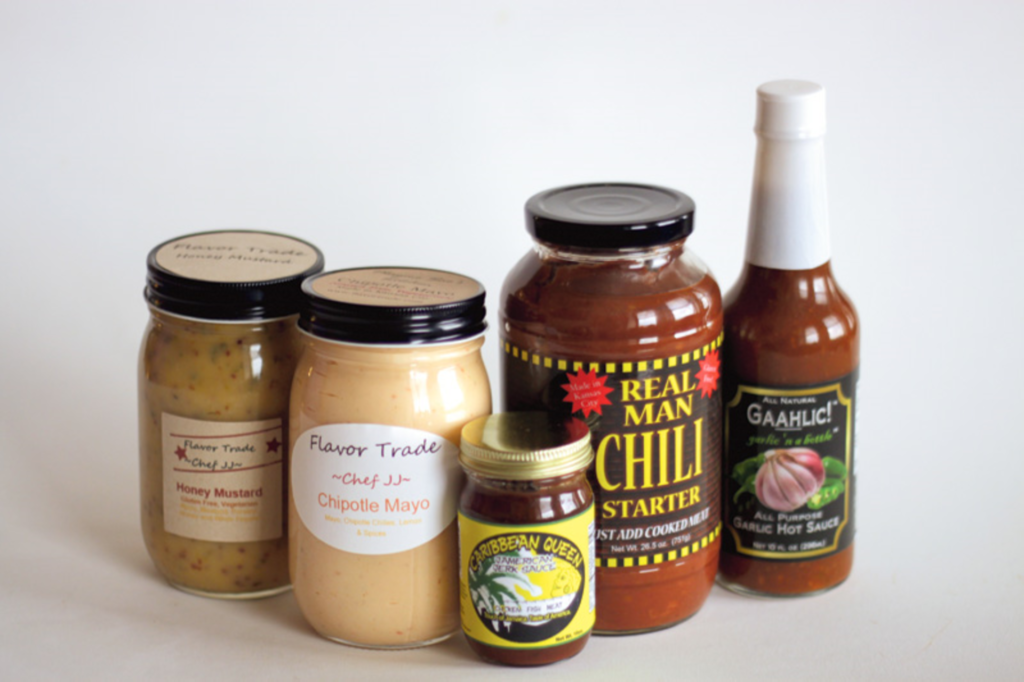 The story of 3000 Troost is a tale of money, music and mayonnaise.

The shelves of the low-slung brick building, which hasn’t been a supermarket since Gerald Ford was in the White House, are now filled with locally made chipotle-flavored mayonnaise, garlic sauce, salad dressings, barbecue sauces, and bottled chili.

Flavor Trade, a commercial kitchen, food-manufacturing plant and retail shop, has hints of that bygone era with two worn checkout counters that date back to the 1950s. The cash registers are gone, but you can charge your groceries using Square.

It’s still not really a supermarket, but if Shannon Kimball has his way, Flavor Trade will again make 30th and Troost a serious shopping destination.

Kimball, who formerly owned a construction company that did high-end bathroom remodels, turned his attention to food manufacturing as an offshoot of his passion for barbecue competitions. His barbecue team, FireBug, now competes in only two regional competitions a year, but Kimball began making his own line of rubs, marinades and barbecue sauces. That led him to form Flavor Trade, which packages and markets products created by other local-food innovators, including such “incubator clients” as Tim and Laura Tuohy’s Kansas City Canning Co.

“It went from being my hobby to my business,” Kimball says.

Kimball opened Flavor Trade’s retail business May 1. Store hours are 9 a.m.–5 p.m. Monday–Friday and 9 a.m.–2 p.m. Saturday. This summer, he plans to host a farmers market in the store’s parking lot. The back of the building is being used by several local entrepreneurs to create products, including ex-Sporting KC player Steven Spangler’s Simple Science Juices.

The only thing that Kimball likes better than giving customers a tour of the deceptively large facility is sharing the property’s history.

“In the 1920s,” Kimball says, “this was the Horner Institute, the forerunner of the Conservatory of Music.”

Yes and no. The pre-World War II structure, which most recently was a Wonder Bread Thrift Store, never offered music classes within its 6,000-square-foot shell. It was built in 1940 as a Safeway supermarket.

In 1920, students at the Horner Institute of Fine Arts did take lessons inside the gothic George F. Winter mansion, a magnificent three-story stone hulk with turrets and balconies that stood on this location till 1938. Not long after Charles Horner’s music school merged with the conservatory, it moved to Armour Boulevard, and the Winter home — like most of the mansions on Troost — came tumbling down.

The supermarket later became a uniform company and then a store selling day-old bread and pastries. Since Kimball bought the building a few years ago, pastries — fresh pastries this time — have returned to the venue. Carla Schreiber began selling her fresh cheesecakes at Flavor Trade earlier this month.

Kimball says this stretch of Troost, once dominated by a commercial-bakery building across the street, is “a neighborhood in transition.” Much of the property to the north of Flavor Trade is owned by the Nazarene Publishing House. A slow renaissance of new retail development has begun to the south, which once boasted dozens of mom-and-pop stores.

During the early 20th century, Troost had a busy streetcar line that brought customers from different parts of the city to the many movie theaters, cafeterias and shops that lined the thoroughfare. Kimball would like to see that kind of energy return to the neighborhood.

“I think you’re going to start seeing some of the positive energy come back,” he says.