Sex and the City: The Movie 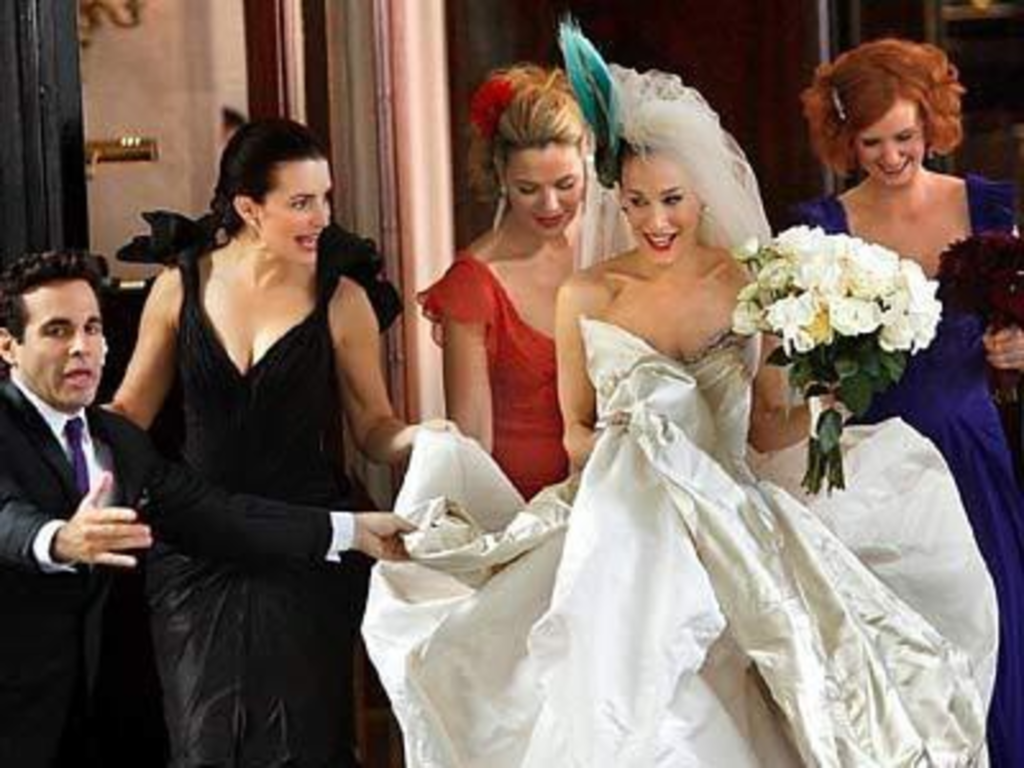 Oh, please — spoiler alert? Fine, I won’t tell you whether Carrie Bradshaw ties the knot with Mr. Big, even though you’ve already seen that gown winging its way around the Web. Some fans might be more interested in whether the frock — which looks as though our Carrie is taking a bath in a pile of Styrofoam — is a de la Renta, a Wang or a Westwood than in whether she gets hitched to the Elusive One. Trust me, there’s precious little else to give away, for though Sex and the City: The Movie is every bit as busy as its HBO progenitor was, it’s virtually plotless, not to mention pointless.

You know you’ll see it, even if you’ve already learned whether Charlotte is pregnant, Miranda continues to grin and bear it with Steve in Brooklyn, or reformed Samantha — now shacked up with the priapic Smith on that other coast — remains persuaded that there’s more to life than one prick after another. You and I both know that you must check in with the old girls and their Vuitton bags one more time before they graduate from Botox to assisted living.

Don’t get me wrong: I enjoyed the television series, to a point. And I’ll always be grateful to Michael Patrick King, who dreamed it up (and also wrote and directed the movie), for joyfully banging the final nail in the coffin of the word spinster — even though it was James L. Brooks who got the ball rolling with The Mary Tyler Moore Show 30 years ago. Like most Sex and the City acolytes, I had my favorite girl: Miranda (Cynthia Nixon) was No. 1, for having a mouth on her and a life I could recognize, followed by Samantha (Kim Cattrall), for having a mouth on her and a life I couldn’t. If the man-eating Samantha was Sue Ann Nivens plus graphic sex, Charlotte (Kristin Davis) was Mary Richards on a stick. Carrie, however, drove me right round the bend.

For one thing, Sarah Jessica Parker dressed like somebody’s 8-year-old daughter; when she had sex, I felt as though I was watching child molestation. For another, I didn’t for a moment believe that Carrie — supposedly a writer as bold and brassy as her creator and alter ego, Candace Bushnell — could grow so head-tossingly kittenish every time a man came along or wax so unrelievedly sweet to her women friends. I loved the show’s ribald irreverence and wacky carnality, but after a while, the shopping grew exhausting, the endless supply of single men improbable, and it began to grate that the Fabulous Four were getting more regular action than any single woman I knew.

Inevitably, like many an innovative TV series, the show succumbed to a crippling seriousness: Samantha got breast cancer; Miranda got Steve, Brooklyn and a demented mother-in-law; Charlotte got Harry Goldenblatt and the obligatory Chinese baby; Carrie dumped that Russian thing and got back with Mr. Big. I won’t say I was unmoved, but all that realism did rather put a damper on the trashy flash and glitter.

Less a movie than a very long goodbye (again), at 142 minutes, Sex and the City is basically a whole season’s worth of episodes — or outtakes — strung together for no better reason than to squeeze all remaining revenues from a stupendously popular show that got out while the going was good. If nothing else, Sex and the City confirms King’s gifts as a television director while demonstrating conclusively that he’s in way over his head working on the big screen. Whereas TV is small and broad and domestic and episodic, movies are large and potentially deep and climactic. But here, the show’s lifeblood — its trippy, backtalking, très gay script — sags into the garden-variety sassiness you’d find on any network sitcom. I missed the show’s bitchy one-liners like hell. And despite the pubic hair, well-hung penis and mildly graphic Malibu copulating that won the movie its R rating, there are more bad sex jokes than good sex scenes.

What truly undoes Sex and the City, though, is its wavering commitment to the series’ target audience, trashy retail aesthetic and deeper themes. Waving feebly at the youth demographic, the movie drafts a terrified-looking Jennifer Hudson as Carrie’s new assistant. (Lest you smell racial profiling, she comes with a college degree and a nifty way with Web design.) She’s here and gone in the blink of an eye, but though King returns to the darker, more middle-aged landscape he painted with such compassion and swagger in the series — urban loneliness and the middle-aged woman’s weary desire to be done with romantic game-playing and get coupled already — he mushes it all up with, of all things, a lecture on the perils of materialism, followed up by $525 Manolos.

Instead of Bridezilla on wheels, we get forgiveness writ large and lunch at the local diner. Whether this is a salute to recession or an attempt to hit pay dirt with a proletarian audience, King fails to grasp what he once understood: When times are hard, you don’t cry poverty. You step on the gas and give the audience a show.