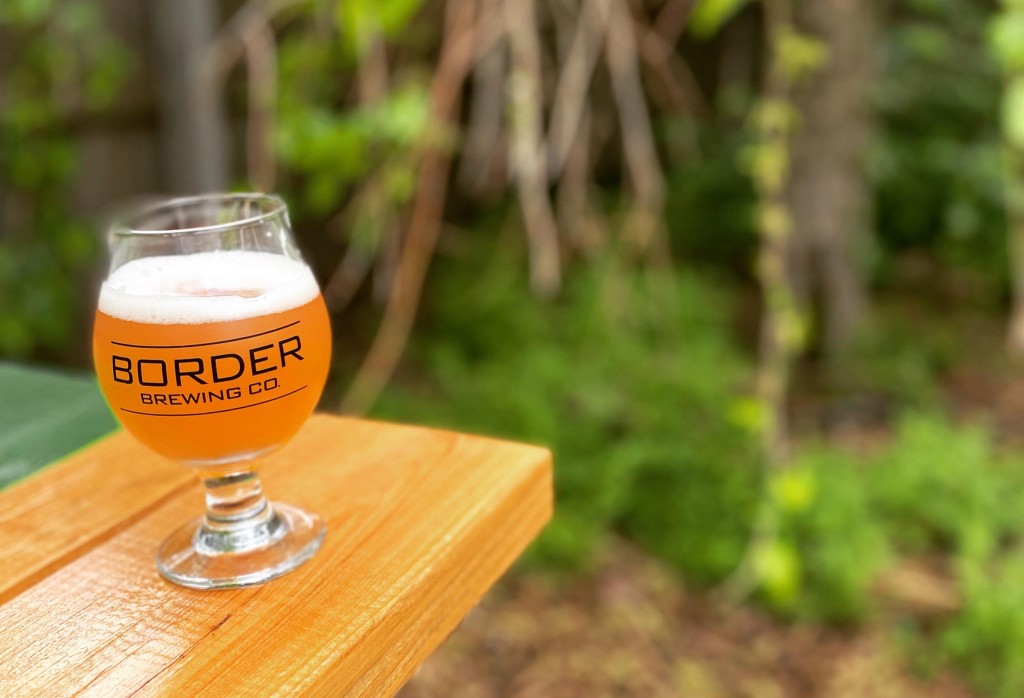 Kansas City’s craft beer scene has a pint for everyone this summer. Whether you’re into sipping suds on a patio, crushing cans to stay cool, or throwing back oat sodas, KC is chock-full of tasty taps.

Narrowing the list to seven is a tall task [journalism is hard work, but we do it for the people]. So, we rolled up our sleeves and ripped some 16-ounce supersets. We finally woke up a week later with this list typed out and safety pinned to our chest.

When it first opened in early 2015, Border Brewing Company set the trend in the East Crossroads—before the banks, condos, and seemingly every third KC brewery came to the district. Recently, the there-before-it-was-cool brewers relocated. They didn’t go far, just a block away to 512 East 18th Street.

Border takes pride in their KC roots. Everything there is local: the beer, the bar snacks—even the wood for the tables, chairs, flight boards, and the bar itself which was sourced from Urban Lumber Company where they harvest local “waste trees” and save them from a trashy demise and transform them into fine pieces of functional art. Somewhere on the Peacock streaming app, Ron Swanson is smiling down on the Urban Lumber Company.

Border’s strength lies in the variety of beer-style options that delight the palates of the Coors-drinking craft beer newbie and the wax-mustachioed beer snob.

“If all you’ve ever had is Bud Light, we get excited to help you jump into the world of craft beer,” says Border Manager Jessica Bloom. “We take big pride in our customer service.”

Their Strawberry Blonde is a crowd-pleaser—featured in a previous “Best of KC” issue—and made with an in-house strawberry puree. On the first taste, you’ll notice that they use real strawberries. The tartness of fresh fruit is a dead giveaway; artificial purees are often saccharine sweet.

The Lima Fresca Lager is crisp and goes down almost too easy on those hot days with its thirst-quenching yet subtle lime and salt combination. The brewers dry-hop the recipe with lime zest, and staff members top off the pint with some hand-squeezed lime juice. The flavor blend practically dares you to grab some tacos from a First Friday food truck.

There won’t be a dull moment at Border this summer. The new location has a stage and outdoor seating with urban green space. There’s live local music on Sunday afternoons, trivia on Wednesday nights, Sporting KC watch parties, and even themed “You’re the DJ” events on Fridays. 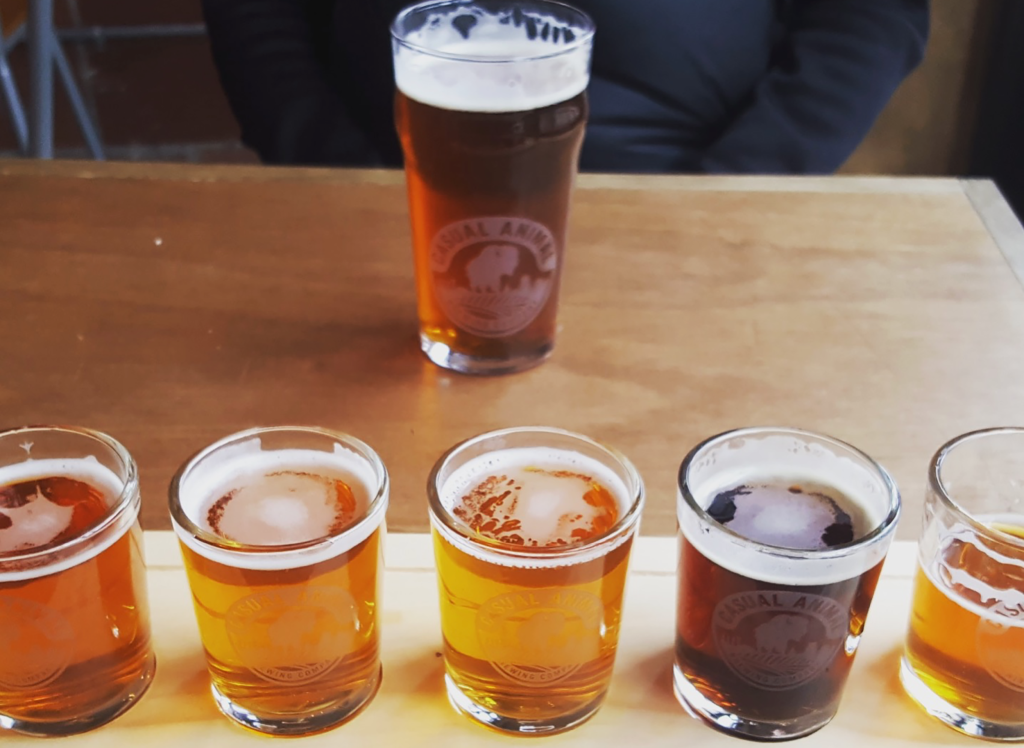 Owners Lara and Kyle Gray opened the space in 2018, drawing inspiration from their time absorbing the beer culture in Fort Collins, Colorado.

Kyle Gray’s 12 years as a graphic designer is on display in each brew’s label art and throughout the space’s vivid murals. Gray’s designs also make for some of the niftiest beer-themed merch in the city.

The taproom has “working on my thesis” vibes with exposed brick walls, hanging plants, sky lights, Edison bulbs, and rugs on cement floors that really tie the whole room together.

“Our vibe and our aesthetic are eclectic. It’s really an amalgamation of all the things we love from the different places we’ve traveled to and breweries we’ve visited over the years,” says Lara Gray.

The brewery focuses on a wide-ranging menu free of flagship beers. Casual Animal runs on a small 7-barrel brewing system which allows everything to be fresh, new, and experimental. But don’t fret—favorites are often brought back seasonally, as the beer list constantly changes.

The Local Motive is one of few mainstays, and for good reason: $2 of every purchase goes to a local nonprofit.

Look for a bronze lager called the Bronze Falcon, a strawberry wheat named Koala Berry, or the Shuttlecock Lager for something light and refreshing as you soak up the A/C this summer.

If you’d like a beer and a laugh this summer, the second and fourth Tuesday of the month feature a comedy show arranged by John Cheeser. 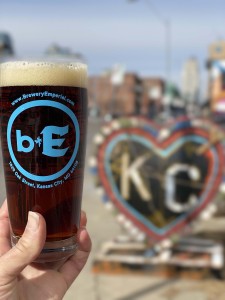 Fashioning as an homage to Imperial Brewing as well as a European-style beer garden, Brewery Emperial has been slinging quality brews in a one-of-a-kind social setting since 2016.

The name comes from two words smashed together: empirical, as in fact—and imperial, as in majestic or royal.

The main draw is the large outdoor bier garden that includes graffiti-decorated steel cargo containers, a solar awning, firepits, picnic tables, and umbrellas. Brewery Emperial focuses on the social experience and uses an ordering system through the GoTab app so you can have your beer when you want it as well as your conversation—uninterupted. The setup encourages old friends, family, and even pets to pass the time unbothered by TV screens or overzealous servers.

Biscuit is one of their more popular options year-round and is a classic English-style extra special bitter (ESB). Don’t be scared off. In England, if you order a pint of bitters, you get what looks like an Irish red and tastes nothing like the IPAs we are used to. That’s because hops grow better and are more potent in the U.S., and Brits have a different standard for bitterness in beer. 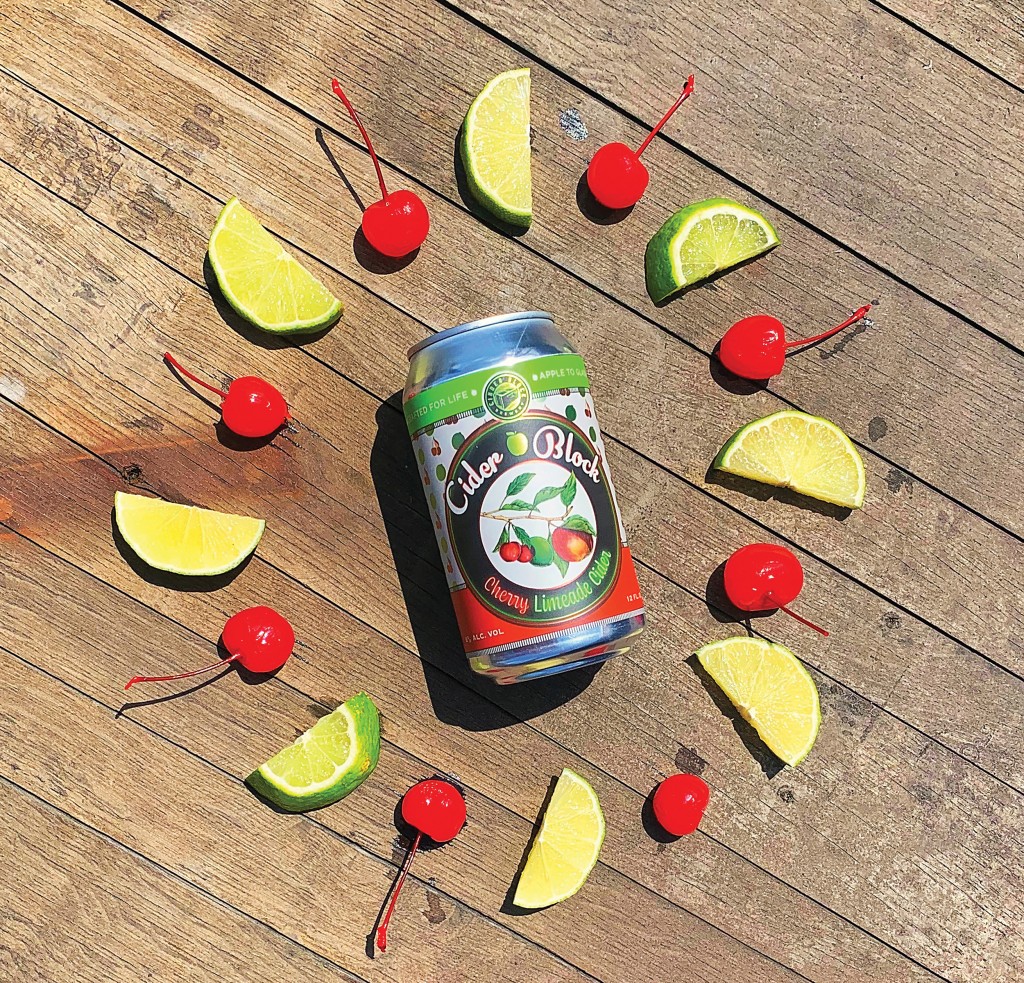 Bryce Shafter opened Cinder Block Brewery in 2013 after his wife nudged him into brewing somewhere other than their basement.

Cinder Block was one of the first five breweries to open in the metro. At the time, North Kansas City was lined with manufacturing and industrial warehouses, so Cinder Block chose to cater to their working class neighborhood with both styles and names like Paver’s Porter and Weathered Wit. Their six-hop Block IPA was their initial hit, and its piney and citrus notes can now be found on taps all around town.

Shafter’s wife made him promise to brew hard cider which is her favorite beverage, and thanks to her, Cinder Block produces the only local hard ciders in the metro. There’s an annual rotating cast of dry ciders made in both English and French traditions with local apples, pears, and cherries.

During the summer, Cinder Block offers a Cherry Limeade Cider that tastes better (and goes down easier) than sneaking vodka into your Sonic drink.

Visit on a Monday to indulge in $3 flagship brews, or check out Firkin Fridays for a true old school experience of how beer used to be served—a wooden barrel placed on a counter where a one-off beer is tapped for that night only. Just think of the tavern scene in Beauty and the Beast. 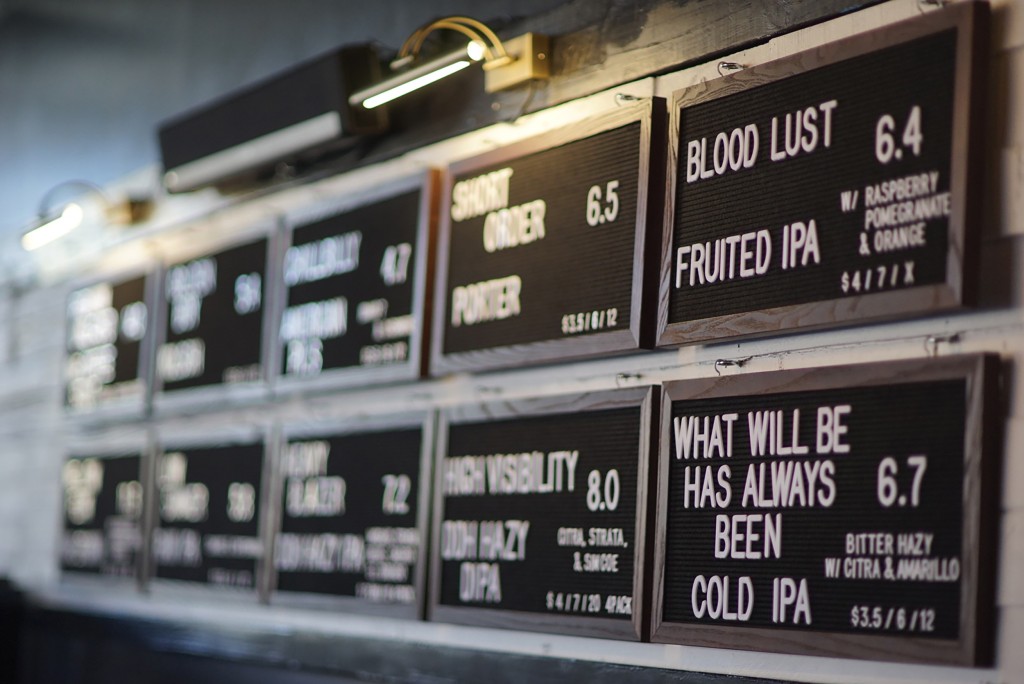 Strange Days Brewing Co. is a bustling brewhouse near City Market and occupies part of the historic Muehlebach Brewery and Schlitz building.

The brewery opened in 2018 with a name to reference the modern strangeness we are all living through and gathers inspiration from their multi-cultural neighborhood while using global styles and ingredients in their processes.

Their willingness to experiment with more non-traditional flavors has yielded many unusual combinations such as the Peach Limousine milkshake IPA, the Maple Blueberry Smoothie fruit sour with warm notes of vanilla and cinnamon, and the piña colada-inspired Gold Sand Beaches imperial pastry blonde ale.

Most beers are brewed as one-offs, and Strange Days focuses on heavily fruited recipes, hazy IPAs, and big stouts. However, head brewer Trevor Schlam emphasizes the ability to make lighter lagers and more crushable beers, like the ones brewed for Nighthawk.

Strange Days is a local supporter of the Tottenham Soccer Club and hosts watch parties for European football fanatics. Other summer festivities include live DJ events, food trucks on First Fridays, and an assortment of pop-ups including the Wasteland Society.

Rockcreek Brewing Company is a small scale brewery in Mission, KS founded by two friends at Cerner who enjoyed working and drinking together. The two bonded over a love of craft beer and began a search for the right location and brewmaster for their own vision.

They found their spot in a walkable Mission location with quaint indoor seating and a slightly larger patio. They eventually procured their perfect brewmaster an opened during our first pandemic summer, becoming a pleasant neighborhood spot to decompress—six feet apart.

Rockcreek aims to keep prices low. Most brews top out at $5 a pint, and tipping isn’t required. But if you do opt for generosity, all tips instead go toward local nonprofits. Rockcreek has donated nearly $90,000 to the community since their grand opening in June 2020.

A typical summer day at Rockcreek might involve a few beers on the patio, an adjacent food truck such as Estrella Azul, Smoke and Seoul, or Taco TA-GO; or even some Charlson popcorn if you just have the munchies.

Celebrate the company’s anniversary this month with the Cosmic Punch Yeast + Phantasm and the commemorative New England IPA. Or try the In Transit Cream Ale for its silky mouthfeel and hint of citrus. Don’t skip the Zocchihedron Oat Lager, which is Rockcreek’s honorary 100th brew. 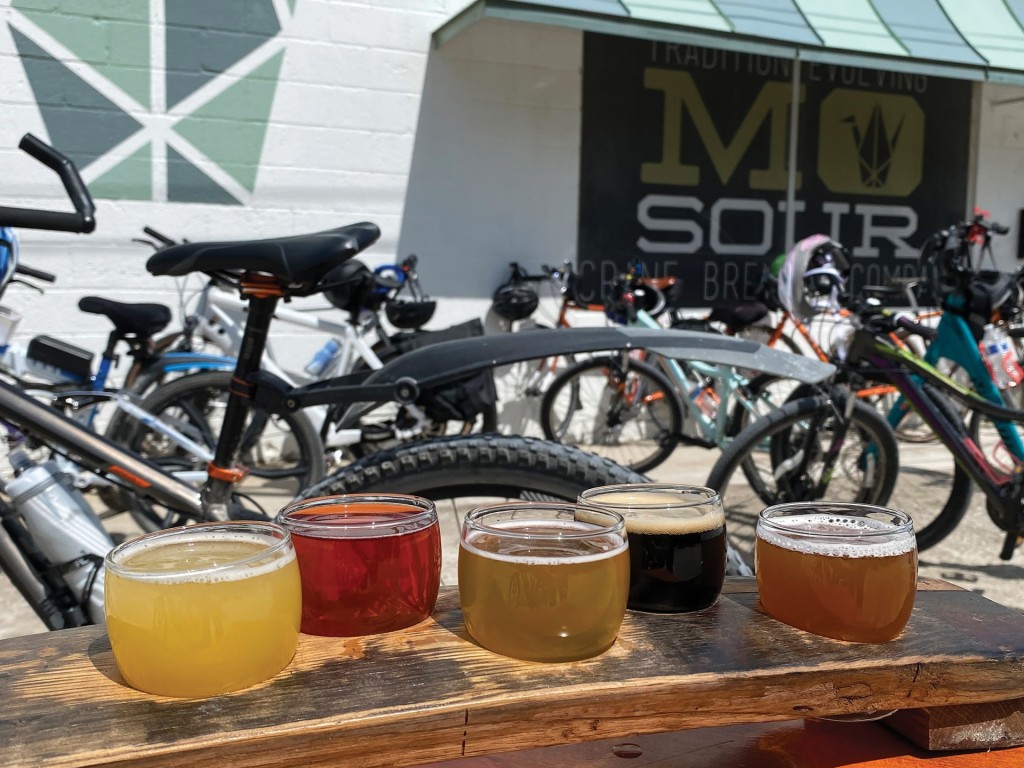 Michael Crane was already a famed home brewer in 2015 before upscaling and opening Crane Brewing at 6515 Railroad St, in Raytown, MO.

Craft beer culture is often fixated on what’s new and different, so when Michael Crane came to the beer festival scene with a beet-infused Berliner-style sour wheat ale, the lines were comparable to those of Black Friday early birds.

Crane has been known for sours and farmhouse ales ever since, but they feature less intensive offerings like Odd Bird, a corn-based light lager; and Thundergong, a wheat beer brewed with orange peel and just a touch of hops. Crane also offers beer slushies where some of their more fruit-forward offerings are dispensed from a Slurpee machine.

We sampled Hipster Buzzwords, a hazy New England style IPA that’s citrusy, hoppy, and appropriately chewy. It checks all the boxes you and your record collection could hope for. The Strange to Explain is a sour IPA made with Cara Cara oranges; it’s complex and tasty but also, well, difficult to describe.

Crane’s rustic taproom, located just off the Rock Island bike trail, is only enhanced by their rotating food trucks and collaboration with Harp BBQ. A full menu of small-batch barbecue is available from 11 a.m. – 3 p.m. every Saturday, and tacos are served on Fridays after 5 p.m. Tyler Harp’s brisket has become one of the most coveted pieces of meat in the city. Harp says that despite supply chain issues driving up the price, they’ll always have it.

Nothing says “Kansas City summer” quite like posting up in a taproom just off a gravel road while eating world-class meats and washing it all down with exceptionally unique beer.