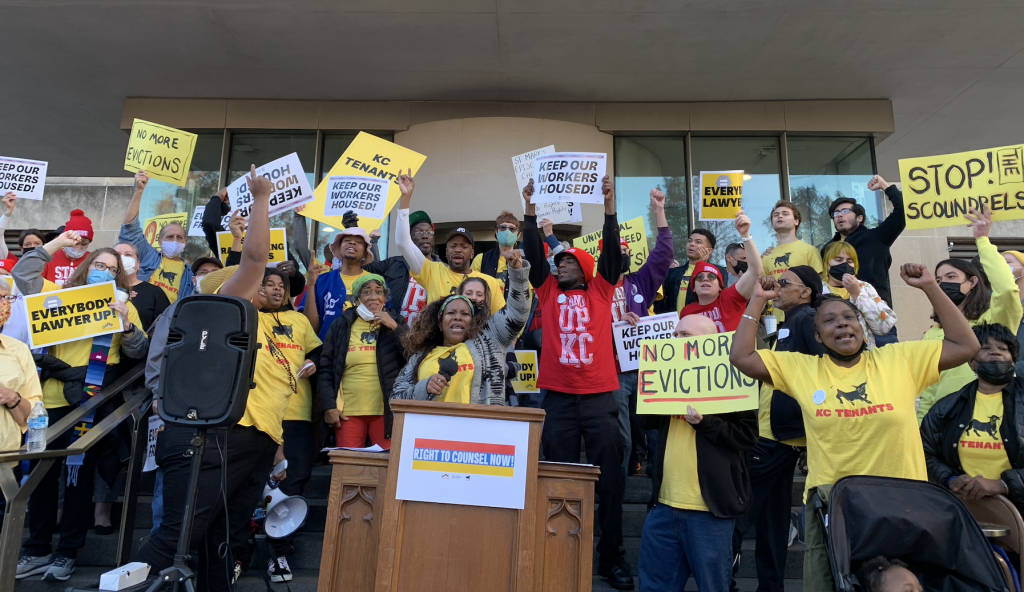 Rally for Right to Counsel ordinance at City Hall. // Photo by Rachel Potucek

In the early days of 2020, as the pandemic started to grip the U.S., Coulbourne was recovering from multiple surgeries when her landlord suddenly decided to sell the house. She asked for more time, but her landlord evicted her through her city’s eviction court process.

The eviction catapulted a grueling “two-year spiral” of housing instability for Coulbourne, a mother of two.

Through the height of the pandemic, her family bounced between hotel rooms and shelters as she devoted countless hours to phone calls and paperwork to apply for relief that would never come.

She filed 10 applications for affordable housing—one at a time, per requirements. Month after month, each was denied.

Coulbourne’s story is hardly unique. Eviction is a life-altering experience that can lead to long-term financial harm, job loss, poorer health, and often homelessness, yet is far more common than many realize.

Kansas City sees roughly 8,000 eviction court cases per year, and right now more than 500 evictions are sitting in the city’s dockets. Nearly all these cases result in eviction, hurling an untold number of families into crisis.

Eviction is a sprawling threat for many. Nearly half of Kansas City residents (46%) are renters, and most working-class people—which account for a larger share of renters than homeowners—are one financial emergency away from falling behind on rent.

On Thursday, Coulbourne took the microphone at a rally on the north steps of Kansas City’s City Hall to help introduce a new “Right to Counsel” ordinance that would keep more families in their homes and bring balance to an eviction system that favors landlords in 99% of cases.

The ordinance—developed by KC Tenants, Missouri Workers Center, Stand Up KC, and the Heartland Center for Jobs and Freedom—is supported by more than 40 organizations and is sponsored by Councilmember Andrea Bough.

The “Right to Counsel” ordinance would guarantee legal representation in landlord-tenant cases and require full funding, committee oversight and reporting, and city staffing for intake and tenant outreach. Similar legislation has been adopted in 12 major cities, including Philadelphia, Cleveland, Louisville, Newark, and San Francisco, and three states.

At the rally, people described the shock they felt experiencing a machine-like eviction court system that places nearly all its cases’ tenants on the curb within days of their court dates. 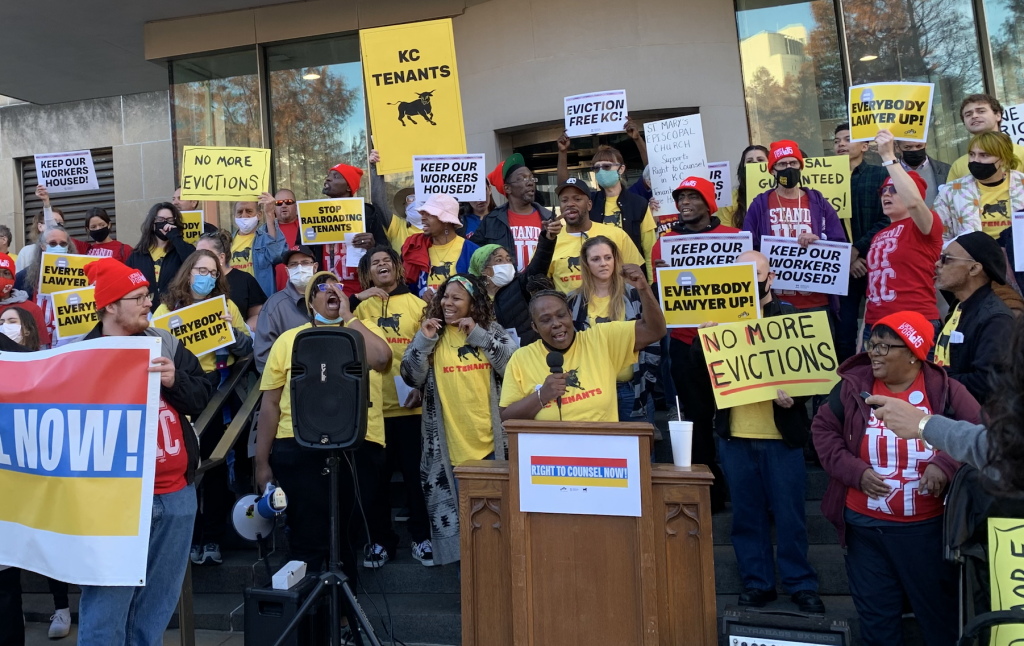 Rally for Right to Counsel ordinance at City Hall. // Photo by Rachel Potucek

Terrance Wise, a leader with Stand Up KC, experienced eviction in 2015. His hours were cut at the Burger King where he worked, and he fell a month behind in rent. He tried to work out a payment plan, but his landlord took him to eviction court.

Wise described a courtroom devoid of support, counseling, or opportunity for negotiation: “I came up to the front of the court, the judge asked if I had the money [for rent], and I was ordered to move in 10 days,” he says.

“I grew up being told that in our court system, I had a right to an attorney. I thought it was the bedrock of a democratic society. It felt like we didn’t have any rights. It felt like we were sentenced to homelessness.”

Suddenly, he found himself moving into his vehicle with his three daughters and his fiancee. “It’s a memory I can never erase from my childrens’ mind, as a father,” he says.

Gina Chiala, Executive Director and Lead Attorney for Heartland Center for Jobs and Justice, describes the current eviction system as “nothing less than a nightmare” and a “total deprivation of due process.”

Chiala’s team found that while landlords are represented by an attorney in 90% of Kansas City eviction proceedings, tenants have attorneys just 3% percent of the time—and 99% of cases result in eviction. When her team began representing tenants in 2020, they flipped those statistics around. After representing more than 300 tenants, their team has had almost zero evictions.

“Having a lawyer means the difference between being on the streets and being housed,” she says. She described tenant representation as a humane “win-win” that both landlords and tenants prefer. It keeps families housed, and in many situations, landlords can recoup rent payments they otherwise would have lost in evictions.

The ordinance is expected to cost $2.5 million annually, and the city has federal funds that can cover costs for two years. Advocates say this ordinance is an opportunity to reduce overall spending, and they point to the significant savings of homelessness prevention.

For example, Los Angeles saved $3.50 in homelessness services for every $1 it invested in tenant representation.

Asked if he thinks the ordinance will pass, Wise says he is “very confident.” He says organizers are consulting with all 12 cities that have passed similar legislation, and they are working with organizers in St. Louis to introduce an ordinance there.

For Coulbourne, her harrowing two-year journey has become a source of power.

She has since become an advocate with KC Tenants, where she hopes to change a system that changed her life. Her eyes lit up as she described calling KC Tenants’ hotline for the first time.

“It excited me. It revived me,” she says.