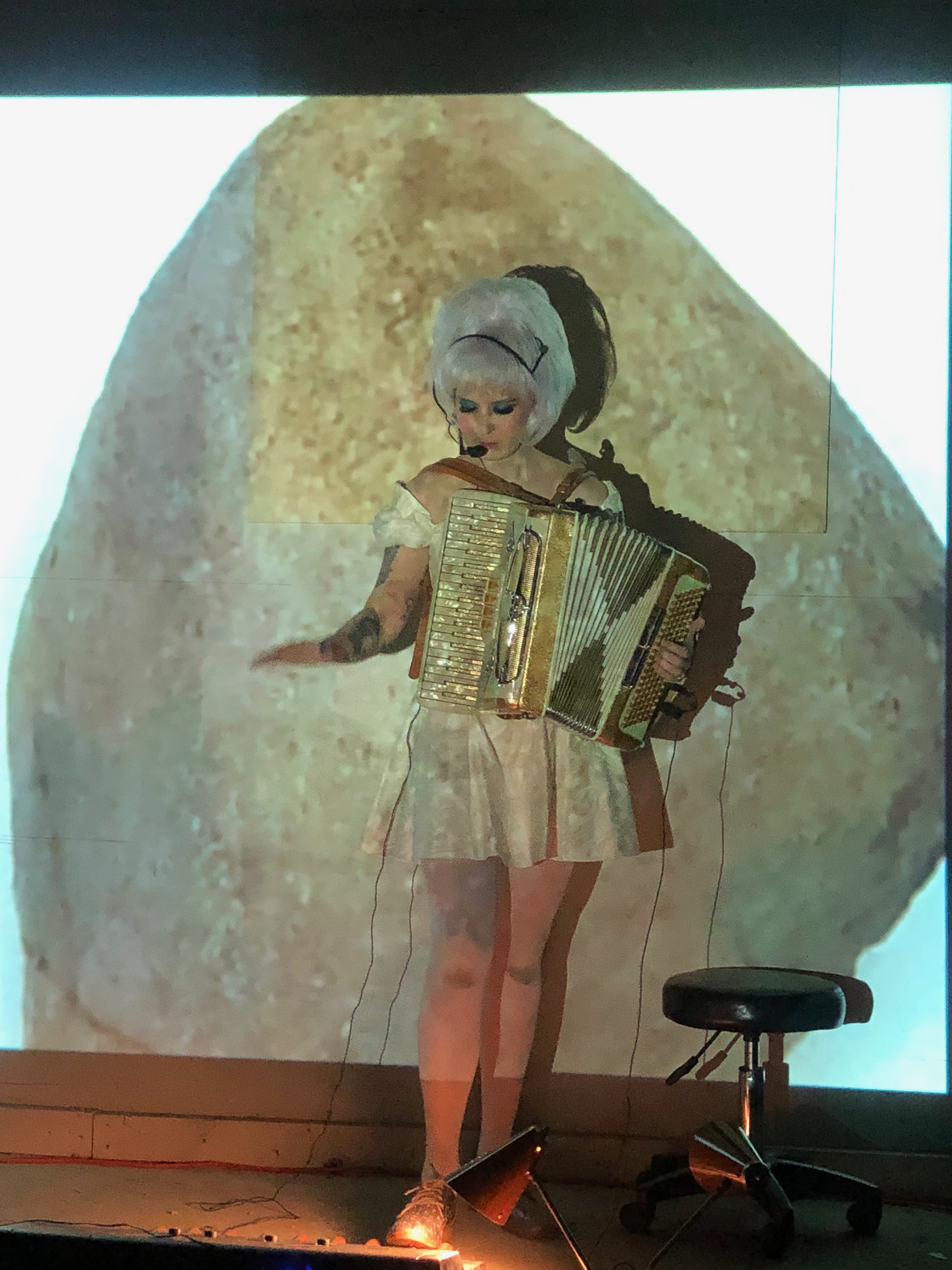 Julia Vering’s first job out of college was at a Leawood nursing home, where she worked as an activities assistant. She’d studied experimental animation, electronic music, and social work at Evergreen State University and hoped to find a way to bring those interdisciplinary skills to the position.

But, Vering says, “I looked at their calendar—this big book of calendars—and they had been doing, like, Pictionary every night for years and years. And no one liked it.”

So, one day, Vering arrived at work with a video camera and some props and announced that they’d be making a movie.

“People are in wigs, they’re in their wheelchairs,” Vering recalls. “They’re just, like, cracking up.” She’d film scenes, then rewind the camcorder and play it back on a TV for everyone to watch. The residents ate it up.

Vering went on to receive a Master of Social Work from the University of Kansas, but she continued to find ways to incorporate dramatic arts into her work with seniors. In 2011, with the help of a Rocket Grant, she created, under the name Unicorns in the Snow, the multimedia project “You Live Here Too,” which featured video, stop-motion animation, original music, and local seniors acting and serving as oral historians.

Shortly thereafter, motherhood prompted Vering to take a five-year hiatus from making art. Lately, though, she’s back at it—thanks, kind of, to Courtney Love.

“An old friend came into town—an old creative partner—and we got out the guitar and did some Hole covers,” Vering says. “Once I started doing it, just dabbling in it, it just made me remember that [art] is a humongous part of my life that is just as much a purpose of living as anything else. I wasn’t a whole person, basically, without that.” 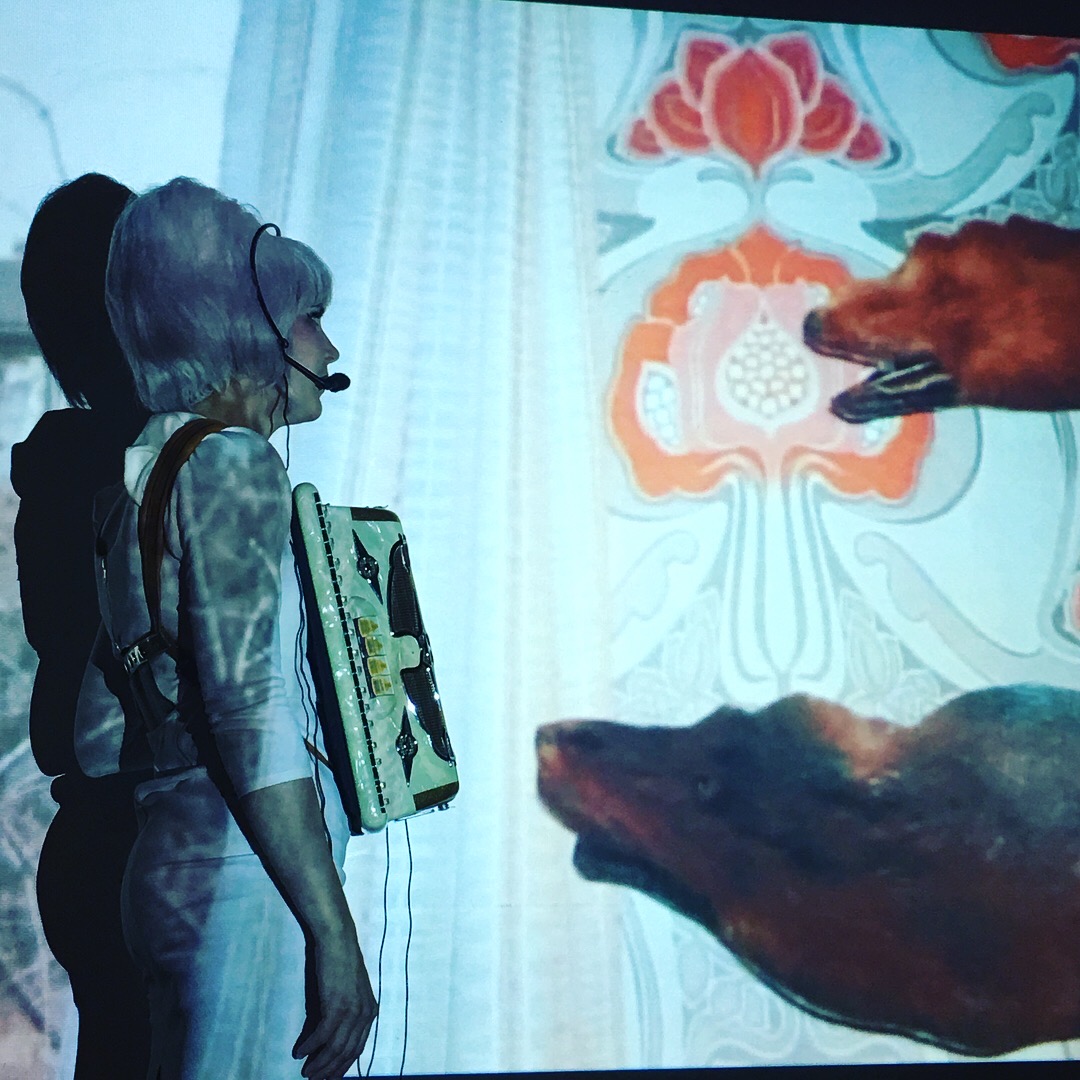 Vering has since resurrected Unicorns in the Snow in a variety of venues around town, from fine arts performances spaces to DIY punk spots. Often, these performances involve all-white costumes (she likes how her clothes and body merge with the picture when she’s in front of the projection screen); long, slow draws on an accordion; and atmospheric synth sounds that lull viewers into meditative states. (In a recent Unicorns in the Snow performance, images on the screen moved through a cornfield for several minutes.)

Unexpected characters tell strange and vivid stories. There’s “George, that baby mouse you found the other day”; a crocodile discusses a trip to the dentist; a headless mannequin seeks help from a “licensed paraprofessional personal shopper”; and a pair of mink stoles talk to one another about their first jobs. Vering says her next show involves a puppet with a beauty mark, a hair garden, and 90s-TV-style dramatic reenactments.

Still a social worker by day, Vering also leads a twice-monthly drama group at Jeanne’s Place, a Prairie Village day program for people with early-stage dementia. At Jeanne’s, Vering hangs bolts of green felt on the wall like a makeshift green screen and films participants acting, later adding in background and basic graphics.

“We’ll do a version of a movie, a TV show, commercials,” Vering says. “Some of it’s just pure improv. We’ll do fake People’s Court. We did 9 to 5 last time.”

Drama, Vering says, “allows people to function at their highest level. You’ll see people that are nonverbal, but they can sing an old song. With drama, someone may have a lot of trouble with language, but if you give them a specific role or costume or something, it’s like suddenly they’re completely in the moment. They are 100 percent appropriate for what the weird scenario is.”

In July, at Capsule, Vering performed “The Understudy,” which included collaborations with members of the Jeanne’s Place group and video screenings of their previous performances of films like Back to the Future and Golden Girls. The seniors’ families were invited.

“It was a total multigenerational audience,” Vering says. “[Being a caregiver for someone with dementia] can be kind of a thankless job. So for family members to be able to see, ‘This is my loved one doing something that’s new for them, they’re being really funny, they’re having fun’— to see them shine is something that there’s probably not enough opportunity for.”

Those with dementia don’t always recognize themselves in photos; in their minds, they often think of themselves as younger than they are. So Vering wasn’t sure what to expect when some of the seniors watched the films they participated in. But the reaction was encouraging, she says.

“One of the ladies that was in it, afterwards she was like, ‘That was me. That was really me,’” Vering says. “That was the best feedback I could have gotten.”

Unicorns in the Snow has three upcoming shows: