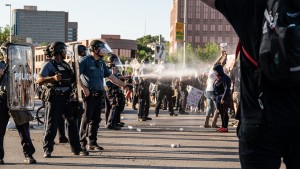 UPDATE: It appears that the remaining 2020 “BulletProof” seminars have been canceled, or at least removed from the Calibre website.

UPDATE: Corrected the timeline on when the officer that killed Philando Castile attended the seminar was 2 years, not 2 days prior

David Grossman, the retired lieutenant turned motivational speaker that specializes in training police officers to kill with less hesitation, is coming to Kansas City. For the low price of $269, Kansas City officers can attend his “BulletProof” seminar on December 10th and 11th of this year.

Grossman, author of “On Killing,” is known around the world for training police with his warrior-style “killogy” (seriously, this is real) discipline which he describes as “the scholarly study of the destructive act”. His whole philosophy centers on the idea that all police encounters need to be treated as inherently dangerous and that officers should be ready to kill without hesitation. He was most recently in the news last year when the Minneapolis PD banned officers from attending his fear-based training seminars. The department made the move after one of their officers killed Philando Castile two years after attending the same “BulletProof” seminar coming to Kansas City.

One of the sessions in the seminar, titled The Sheepdog Mentality, is based on ideas from his book “On Combat”. This teaches that most citizens are “kind, decent people who are not capable of hurting each other”. Sheep. The bad guys are the wolves. And, of course, those that “have capacity for violence, and a deep love for your fellow citizens…a warrior, someone who is walking the hero’s path” are the sheepdogs. According to Grossman, all sheep live in denial, unable to believe that there is evil in the world. And that only through tactics that the sheep may not like can the sheepdog maintain order and control. This is all a far cry from the sort of collaboration, understanding, and empathy being promised by KC police right now.

In light of recent events, and the rift between the police department and so many marginalized Kansas Citians that has been glaringly exposed over the last several days, we at The Pitch feel it would be irresponsible for local departments to encourage or allow their officers to attend this “training”. The optics alone would be terrible, never mind the mentality that would be instilled in the cities’ newest officers. We hope KCPD Chief of Police Richard Smith and his peers from departments across the metro agree with us.