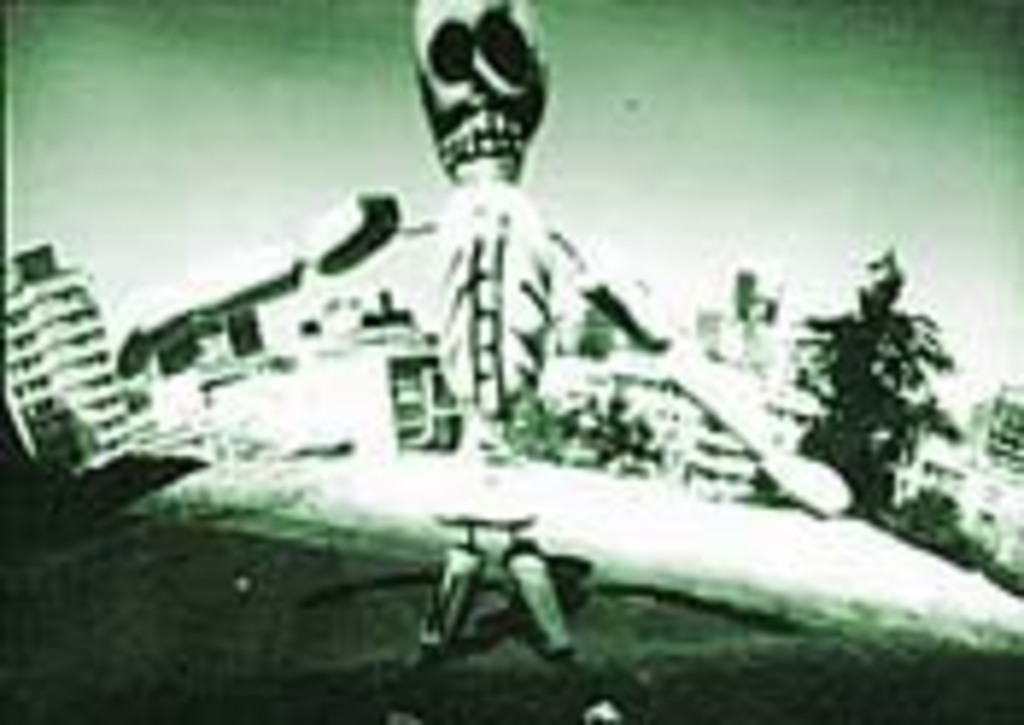 Like the Mexican Surrealists, a group we know more for its fiction than its visual art, Carlos Jurado believes in magic — the palpable, real, physical existence of magic — and he captures it through a magical means: his camera. Photographs from his homemade pinhole cameras are on exhibit at the Society for Contemporary Photography.

Jurado’s belief in the everyday existence of the spiritual is reflected in the simplicity of these works. The subjects are of seemingly benign objects: doorknobs, dolls, eggs. Yet his handling imbues them with a grace of the preternatural. Delicately blurred and convex, the photos present a dreamy landscape where something that probably would not enlist one’s attention becomes a powerful object of curiosity.

Many of the photographs on display at SCP feature a small Day of the Dead skeleton doll, which sets the tone of death and the afterlife to the foreground. The doll, however, is almost comical in its grimace and everyday locations (such as hanging from a bathtub faucet), making the images spooky but playful and giving the viewer a rare experience of balancing between two worlds, one frightening and the other comfortable, thus illustrating the many layers of presence.

at the Society for Contemporary Photography

Closing your eyes Not to nag, but recent events and run-ins have forced a subjective topic into the foreground of my conversations: the apparent and conspicuous absence of many local self-defined artists or arts professionals from local galleries.

Granted, I am most likely preaching to the choir here, but almost weekly I am confronted with a person who — once we delve past the tribulations of the contemporary working artist — has not seen any of the local exhibits or worse, has not even heard of the better-known galleries in town, beyond the Nelson. Generally the excuse is twofold: Working Artist does not want his/her work polluted with outside influences (the “Create what you feel, man!” type) and passes the galleries off with a smug arrogance because, “y’know, Kansas City is just a dinky cowpoke town anyway.”

How does one respond to that? Especially those of us who have seen some of this here world and realize that, comparatively, Kansas City has quite the pulsating arts scene, and we cannot imagine living a life without it. If one’s love of art is so great that it has become a chosen road in life and is a means of definition, why nourish an ignorance toward your own backyard? Those who pass Kansas City off as inconsequential clearly have not paid adequate attention.

Sure, my assumptions are based not on any scientific research but merely on the tenuous basis of oral surveys and visual experience: talking at length to many artists and working in a local art gallery for five years. The strange absence of art instructors was often a subject of discussion with my co-workers. I also had many friends in college who were studying art but never expressed an interest in going to the galleries with me, never picked up a copy of Art in America, and, therefore, mistook 50-year-old movements as contemporary language. Want to gamble on where their art careers are now? Ignored after floundering without the structure of classroom deadlines and interaction.

For starters, ignorance among local art students of a vibrant community is germinated by many local instructors who, because of tenure or big-city ‘tude, dismiss and forget about the thriving arts scene and instead focus on New York as the only place worth a visit. Although New York is important, living with your eyes closed to your immediate surroundings is dangerous on any level. Creating art with an expatriate mindset and in the vacuum of your conceit will only debilitate your expression, rendering it meaningless to the majority of the viewing audience. Instructors who do not encourage their students to see what is around them are guilty of malnourishing the budding minds of future artists, stunting their growth when they are the most open to new ideas.

This lazy segment of the arts population runs the risk of 1) producing artists who work without feedback from others in the field; 2) the KC arts community’s, though healthy, and robust, losing out on necessary educated support; and 3) derivative, sluggish, and uninspired art coming from the Ignorance is Bliss crowd. Pay a visit to the joke calling itself the Lawrence Art Girl Collective to see what I mean. Defensive in their ignorance of what is happening in Kansas City, the group’s members gleefully toil in a hive of redundant, elementary theory and inferior craft yet miraculously retain the audacity to call themselves artists.

Imagine a surgeon who refuses to read the journals after medical school, or a filmmaker who never visits a theater. The results are the same if you are an artist: Education will erode until you are obsolete. If you are lucky, you will get tenure at a small Midwestern college where you can cultivate a cloistered existence and retain an element of comfort in being an artist. Not that it would matter to any of us.