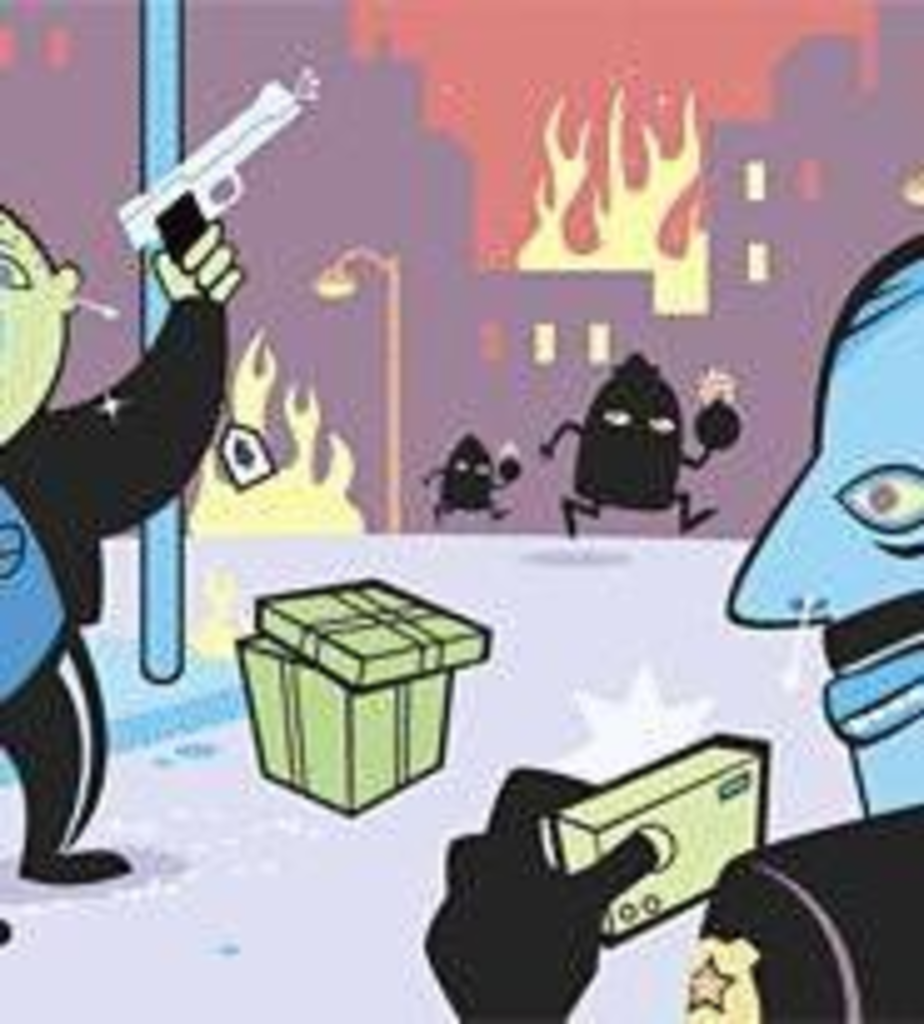 The tiny Alaskan fishing village of Dillingham has some pretty cool stuff on its Web site. There’s a barge schedule and the current temperature, which is usually cold.

In fact, by clicking a few links at www.ci.dillingham.ak.us, Web surfers can see a complete view of the town, thanks to some of Dillingham’s 80 surveillance cameras.

Mostly they record the movement of the Nushagak Bay tides, from the frothy waves crashing near Snag Point to the long mud flat left behind at low tide. The cameras, which update every 15 minutes, rarely catch a car or a person or anything moving. That’s not surprising in a town with only 2,400 people, where the roads dead-end not far outside city limits.

What haven’t been captured by the cameras — and probably never will be — are terrorists.

But Dillingham paid for the cameras with a $202,000 grant from the U.S. Department of Homeland Security. Such grants are meant to help states shore up their defenses during the so-called War on Terror, but, like Dillingham’s purchase of surveillance cameras, abuse of the funds has been widespread across the country.

On February 22, the Pitch sent a formal request to Missouri’s State Emergency Management Agency for records that would reveal how it allocates about $1 million a year in grants received through the federal Buffer Zone Protection Program.

The state awards 51 Buffer Zone grants to government agencies and private companies. The grants average about $50,000 and go to places where people gather, such as malls.

However, public-records experts say the state’s denial carries no weight under the law. In fact, the Missouri Sunshine Law states that any record regarding “expenditures, purchases or contracts” must be made public, says Jean Maneke, a Kansas City lawyer who specializes in open records. “How much money they’re spending and the contracts they’ve made with entities can’t be closed,” she says. “There’s really a simple question here about whether the public has a right to know where the government spends taxpayer money.”

Missouri may be alone in its refusal to release records on how it spends Homeland Security grants. Most states, including Kansas, have released such documents. Charles Davis, executive director of the Freedom of Information Center at the University of Missouri-Columbia, says Missouri could be forced to open the records if taken to court. “There’s enough of this being released around the country that I don’t understand how Missouri could say no,” Davis says. “We’re very much at the mercy of public officials with much of this Homeland Security funding, and whenever the government says, ‘Trust me,’ that’s when I go for my wallet.”

In other states, reporters have discovered obvious abuses of the money. In Washington, D.C., police used proceeds to buy leather jackets, fund a summer-jobs program for teens and send sanitation workers to public-speaking classes. In Maryland, $160,000 in Homeland Security grants bought plasma-screen televisions.

In January 2005, the Department of Homeland Security’s internal audits found that $18.5 million of its grant money had been improperly spent. That led to the arrest of 146 workers and grant recipients. The worst abuses included the half-million spent on artwork, kitchen appliances and workout equipment.

Last month, a review by The Arizona Republic found widespread misuse of Arizona’s $178 million in Homeland Security grants. Cops used it to buy ATVS, Q-Tips and binoculars, the article claims. Arizona Capitol Police spent $3,100 on wallets and a badge for the chief’s hat.

In Missouri, allocation of Homeland Security funding is overseen by Nichols, who spent three decades as a lawman in Kansas City, most recently as supervisor of the local branch of the Bureau of Alcohol, Tobacco, Firearms and Explosives.

“We’re not buying any leather jackets with this money, I can tell you that right now,” Nichols says. “We’re not tolerating any hanky-panky with this.”

To prove his point, Nichols describes several layers of oversight. First, the grants are approved by the federal Department of Homeland Security’s Protective Security Division. The Homeland Security’s Office of Grants and Training is responsible for managing the money that it funnels through the state of Missouri, which administers it. Finally, it’s up to Homeland Security to figure out whether it’s being spent properly.

That’s the same process used elsewhere, as in Dillingham, where residents were outraged last winter when they learned that the city had installed cameras around town. City leaders argued that the cameras would prevent the importation of stolen Russian nuclear material. In May, the town’s mayor, who had served since 1997, resigned after residents hotly argued against the cameras at public meetings.

But what most upset people in Dillingham wasn’t the purchase of one surveillance camera for every 30 residents. Worse is that the cameras record the town’s movements for anyone to watch online.

The implications are obvious to viewers of the live feed labeled “Outside bulkhead toward Kanakanak.” On a recent afternoon, several pickups pulled boat trailers up to the Dillingham docks. It’s easy to imagine using the cameras to spot a fisherman who isn’t supposed to be there. It would be a great tool for an angry spouse, a distraught employer — or an overzealous government bureaucrat.