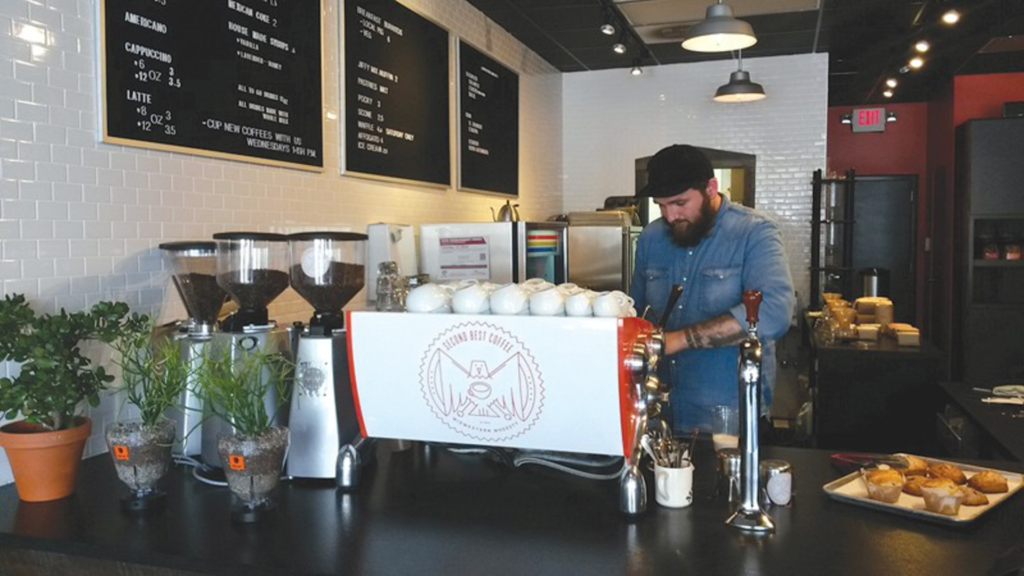 On a Wednesday afternoon at Second Best Coffee, 10 people, tiny silver spoons in hand, are gathered around six cups of freshly brewed coffee. We’re attending one of the four-month-old Waldo café’s free public cuppings – coffeespeak for “taste testing.” Second Best uses a variety of beans from roasters across the country – including Coava in Portland, Oregon, and Corvus in Denver – and the weekly cuppings allow a quick but intimate introduction to new varieties. It’s speed dating for caffeine.

First, we smell each cup, shoving our noses so close, they nearly touch the hot liquid. Then the fun part: Cup by cup, we dip our spoons and slurp the coffee, making the same sound your mom told you not to make when eating spaghetti.

Nathan Anderson, who co-owns Second Best with his wife, Leia, informs me just why Mom was wrong, at least when it comes to coffee. Slurping is an important part of cupping: It aerates the coffee and spreads it over your tongue, allowing subtle flavors – dark chocolate, pepper, raspberry – to emerge. He asks if I can tell the difference between the roasts.

“That one,” I say, pointing to one of the cups. “That one is my favorite. It’s lighter. It might taste fruity, maybe?”

Despite my deep love of all things caffeinated, I have never developed the vocabulary to discuss coffee’s nuances. As with wine, that other beverage with a seemingly impenetrable subculture, the words I usually end up pronouncing are simply “more, please.” Fortunately, at Second Best, my cluelessness isn’t grounds for dismissal. In fact, one of the reasons that Anderson puts on the cuppings is to allow more people to try good coffee without also sampling snootiness. He wants, he says, “to make excellence approachable.”

“The coffee community has a reputation for being pretentious, kind of like the wine community,” Anderson tells me later, over the phone. “I want to take an element of that away and make it approachable. The cuppings are an easy way to do that for us. We love to have new faces.”

Anderson isn’t a typical coffee snob. He knows what makes a good cup great, but he’s not going to roll his eyes at someone who wanders in off the street and orders a caramel macchiato. Located in a nondescript strip mall, the shop itself (328 West 85th Street) is also down-to-earth. The wood walls and granite countertops give the comfortable, well-lighted room a practical, industrial-chic feel, with potted succulents and cycling memorabilia reflecting elements of the owners’ personalities. The location seems to echo Anderson’s ideals as a business owner.

“I think you can get something really good without it being fussy or pretentious in Waldo, and I really wanted to invest in that,” he says. “We still live down here, and I think those values are really important.”

Then there’s the Slayer. Manufactured by a small company in Seattle, this custom-made espresso machine is the only one of its kind in Kansas City and just the second in Missouri. (The other is in St. Louis.) According to Anderson, the Slayer allows the flow rate of the water to be adjusted, which brings out each coffee’s unique flavor.

“We can control not only the consistency of the espresso but we can emphasize different attributes of individual single-origin coffees in a way that wasn’t possible with a more traditional machine,” Anderson says.

The Slayer definitely lives up to its badass name. When I tried a Slayer-made honey-lavender latte, I wanted to spend the whole afternoon slowly sipping the smooth, subtly sweet drink. (And because the café recently extended its hours to 5 p.m., I could do just that.) The espresso isn’t second-best, even if the shop’s name is meant to suggest that improvement is always possible.

“The thing that draws me to coffee is, I can never see the end of learning about it, whether it’s the extraction or interacting with people who don’t know very much, or learning about the farms and the farmers and different countries of origin,” Anderson says. “We always want to be learning and making today’s coffee the second-best coffee to tomorrow’s.”