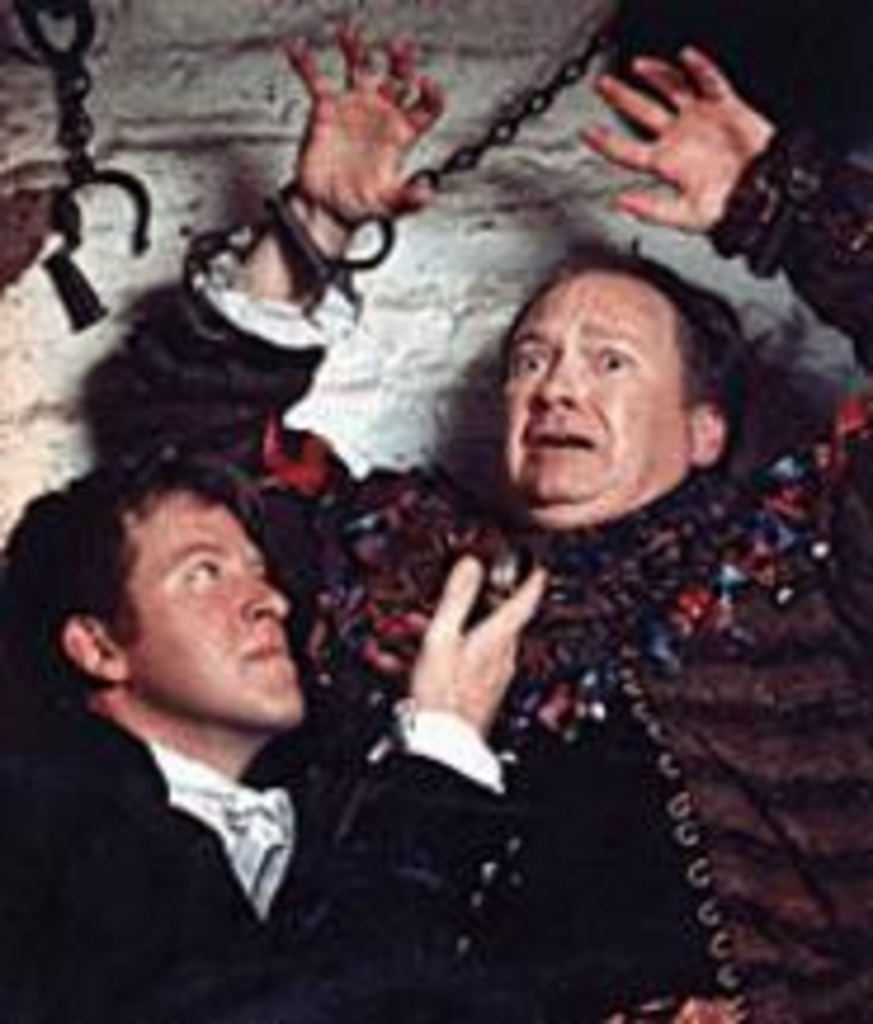 As Halloween nears, the Coterie Theatre is repeating its profitable strategy of the last two Octobers — that is, skewing toward an older audience by issuing a compilation of classic horror stories like a late-night infomercial for hits from the ’80s. This go-around, it’s called Gatherings in Graveyards III, and with such masters of irony as Shirley Jackson, Mark Twain and Edgar Allan Poe at its source, the show is a chilling reminder of the timelessness of such American values as scapegoating, revenge and blood lust.

Jeff Church directs all three twenty-minute tales, kicking things off with Poe’s The Cask of Amontillado, adapted here by Edward Mast. Surrounded by masked revelers, Fortunado (Phil Fiorini) is the highest of stature and drunkest of head. Seizing an opportunity to appeal to his blurry yen for more booze is Montressor (Charles Fugate), a perpetual outsider who resents Fortunado’s power while coveting his respect.

Montressor invents a stash of fine wine and guides Fortunado to the damp cellar where it is allegedly corked. The former’s family coat of arms should be a clue to his plot, inscribed in Latin as it is with something about punishing those who wrong you. Through a diabolically clever mix of sound and lighting design (which is first-rate throughout the show) by Art Kent and David Kiehl, Montressor walls Fortunado behind brick and mortar. A quick epilogue reveals that revenge may ultimately leave a haunting and bittersweet aftertaste.

The piece is the least successful of the three because of a misstep of direction. Though Fiorini’s character is cuffed to the wall, thus immobile, Church directs Fugate to bounce back and forth from that spot to stage center, facing the audience. (Fiorini is left hanging at stage left, as if on hold with a utility company.) Church, defending his staging in a post-show Q&A, said it was not theatrical enough to keep Montressor in front of Fortunado. But Church goes too far the other way — his blocking is unnecessarily busy and ultimately weakens the momentum of the tale’s wickedness.

Mark Twain’s The War Prayer comes next. Twain submitted the short story to Harper’s Bazaar magazine in 1905. The editors deemed it inappropriate for a women’s periodical and refused to publish it.

A lone stereo speaker is placed onstage to signify a church overflowing with worshipers gathered to send their boys off to war. From the back of the house erupts an evangelical minister (Fiorini) who is the obvious forerunner of Jimmy Swaggart. He sweats like he’s under hot studio lights, and his bluster has that twangy, Southern-fried charisma.

Before he leads the crowd in prayer, he liberally spews familiar platitudes summarized by the philosophy that you’re either “with us or with them.” (Mast adapted this story as well and crafted the minister’s speech from speeches of past presidents — excluding, surprisingly, the present one.) During the minister’s eventual plea to God to watch out for the town’s young recruits, an unnamed stranger (Fugate) appears in dusty battle fatigues and asks for equal time. His prayer blisteringly strips the façade from pious warmongering; it’s a fervent wish for “the shriek of the wounded” and a sky blackened by the “wails of widows and children.” Fiorini and Fugate are quite powerful here, both duty-bound to their characters’ opposing theologies.

Shirley Jackson’s short story The Lottery closes the show. It was published in The New Yorker in 1948 and drew what remains the largest amount of mail in the magazine’s history. Adapted for the stage by Brainerd Duffield, it documents a town’s annual June 27 lottery, in which one member of the populace is chosen to be sacrificed for good crops and weather. The script and direction are so free of frills and obvious spooks that the story is almost banal — certainly Jackson’s and Church’s intent — which punctuates the story’s horrifying conclusion. It’s like Our Town directed by Oliver Stone.

The supporting actors, basically extras to this point, get something to work with here. George Forbes convincingly plays a town elder at least forty years older than he is; his performance should be a lesson to the young actors who usually resort to tremors and a humped back when playing the aged. And Vanessa Severo is riveting as Tess, a servile wife who asserts a futile streak of independence by showing up late for the lottery. The one flat note is Sarah Wienke, whose argument against the lottery is rendered limp and airless by her artless line readings.

Enough can’t be said for Kent’s tricky, evocative lighting design and Kiehl’s intricate sound design. There’s a moment between the Twain and the Jackson stories when the sound from the church’s speaker goes first to static and then to a sample of “Hotel California.” It doesn’t make any sense, but, true to the show’s thematic strengths, neither does violence.
Postscript: After making noise with the experimental theater group known as Evaporated Milk Society — most notably with its hour-long Hamlet in the West Bottoms — its young artistic director, Randall Cohn, evaporated himself in 2002. He took off for Los Angeles but has let the Pitch know that he’s back and gunning for new company members to appear in The Queen’s Story this winter.

Cohn, a New York University grad whose experience in that city included working with playwright Moises Kaufman and the original cast of The Laramie Project, says the move to L.A. was motivated by several ideas. “Since I was there, I wanted to see if I could be a movie star,” he said last week. “I got a head shot taken but never had it reproduced.”

Even though Cohn didn’t end up with the role of the new Batman (that went to Christian Bale), he did mount a project at Burning Man. And he discovered that living in the one-industry town couldn’t help but give him food for thought that may show up in later Evaporated Milk projects.

“I was working on a project with a guy I went to school with, doing research into the engine of how America projects itself out into the world,” he says. “Being in the vicinity and shadow of the entertainment media — where everything really is a stepsibling to film and television — I can be scathing of it in my own work.”

Though his definitive anti-Hollywood project may be coming down the pike, Cohn says he’s looking right now for male company members to complement his female-heavy troupe. He held auditions last weekend but wouldn’t mind hearing from prospective actors at 913-648-7907.

He describes The Queen’s Story, which he began to formulate before he left Kansas City, as “a storytelling contest held by the queen of a decaying empire … a meditation on mythology, history and identity — the big three.”