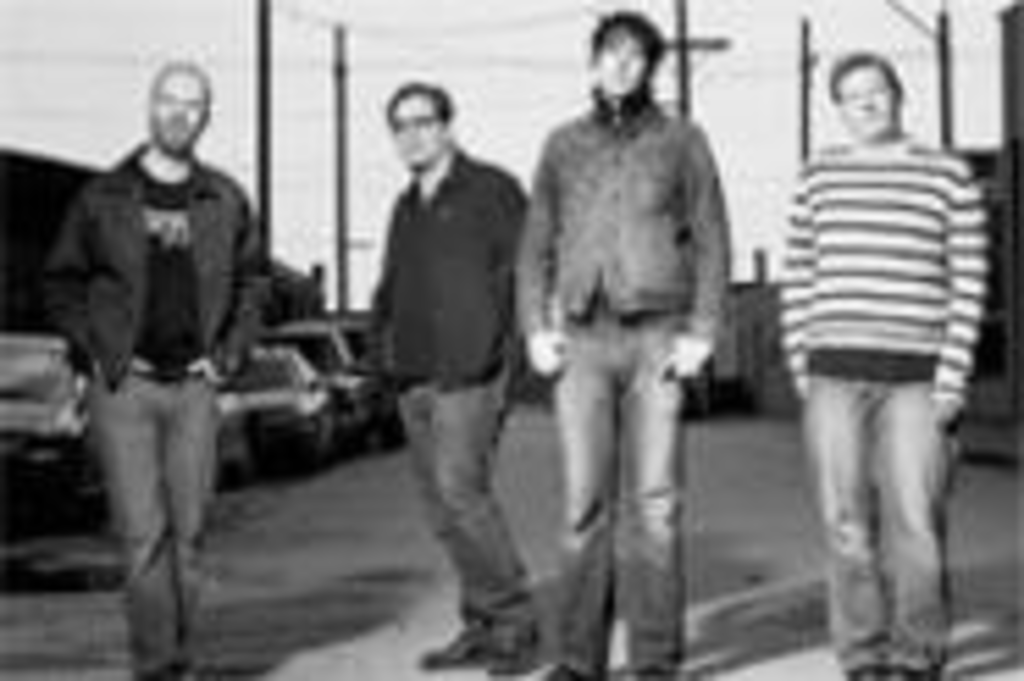 After six years, several breakups and some truly bizarre setbacks, the String and Return finally unveils its second full-length record Saturday at the Brick. On What Cheer, Andrew Ashby’s vocals sleepwalk over obtuse guitar passages and a comprehensive collection of drum clicks and crashes as isolated riffs trigger noise explosions, like high-pitched tones on snowy slopes causing avalanches. Ashby maintains his elegantly dazed delivery whether he’s making the self-evident claim I’m not trying to stir shit up or offering the less obvious assertion these are hilarious times.

Great album, but back to the buildup. TSAR initially expected What Cheer to surface in summer 2004, then revised its schedule and planned a double release party with Doris Henson in March. Drummer Mike Myers agreed to explain the two reasons for the delay, but we’ve added a few false fiascoes to make things more interesting. The real answers appear below.

A.) SunSeaSky, the Wisconsin-based label that issued TSAR’s debut disc, Invisible City, couldn’t summon the funds for a densely layered album such as What Cheer. The band relocated to Kansas City’s Anodyne. A few months later, SunSeaSky mysteriously disappeared, leaving nothing but an update-bereft Web presence.

B.) The band’s members maintained a running joke about whether to add a question mark to the title What Cheer. At one intense all-night session, the debate suddenly became serious, and Myers, who endured a similar shitstorm during his stint with To Conquer (or is it To Conquer?), stormed out of the studio. He didn’t return for two weeks, after which his bandmates agreed to scrub spray-painted question marks off the practice-space walls.

C.) Sky-blue, crop-circle-style patterns wind through a cardboard-tinted backdrop on the record’s cover. To deepen the colors, the group members used screen-printed paper. When they tried to install the inserts, they found that the paper was too thick to fit into standard cases. Having exhausted much of their budget on the printing costs, the group painstakingly shaved centimeters off each insert with sandpaper. Also, someone had scrawled a question mark in indelible marker on several of the covers.

D.) With just a few weeks until the album’s scheduled release, What Cheer arrived from the mastering engineer in unusable condition. Frustrated, the group’s mixing engineer posted derogatory remarks on an industry message board. The band and label sat on the sidelines as the furious mastering engineer threatened legal action. He continued to work on the album, which accidentally arrived in an incorrect format and ended up smothered with hisses and pops. Finally, a pristinely produced product emerged, several months after it was expected.

E.) TSAR’s members also spent time in numerous other outfits, with Andrew Ashby touring with the Belles and Myers working behind the kit on the Life and Times. Until they finally left these groups, Ashby and Myers continually postponed practice for their side project. Guitarist Auggie Wolber and bassist Dan Weber started remaking the String and Return as an instrumental duo, writing “The Highway” as a subtly orchestrated kiss-off to their prodigal bandmates. Onetime TSAR drummer Billy Brimblecom, tired of his rock-star lifestyle on the road with the Start, drunk-dialed his former bandmates and pondered a return to Kansas City. Eventually, everyone ended their creative flirtations and took a solemn vow of faithfulness to the String and Return.

Answer: A and D are the true snags.

Saturday, May 14, at the Brick