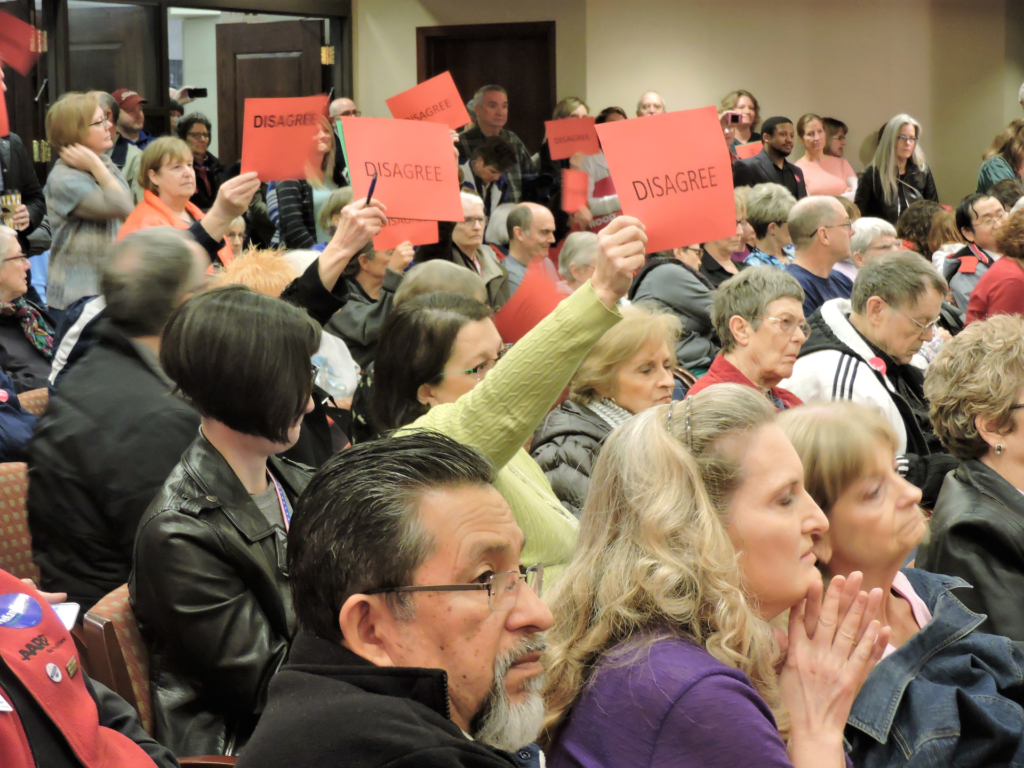 Depending on one’s perspective, the timing of the annual town hall meeting of the Kansas Legislature’s Olathe delegation Saturday couldn’t have been better.

Legislators around the state are being bombarded with calls to override Gov. Sam Brownback’s despicable veto of the Legislature’s bill expanding Medicaid eligibility to an estimated 150,000 Kansans. For the bill to become law, two senators and three house members will have to change their votes from “no” to “yes.”

Olathe represents a rich trove of “no” votes. Every one of its legislators voted against making health care accessible to low-income Kansans. And so the lawmakers present at the town hall gathering in Olathe City Hall Saturday morning faced something they hadn’t witnessed in years past — a determined opposition.

Sen. Julia Lynn eyed the standing-room-only crowd, many of whom carried signs supporting health care and Planned Parenthood, and opened with a question.

How many in the audience “actually live in Olathe?” she asked. Because you never know these days if Planned Parenthood or even George Soros might be busing people in to wreak havoc.

At least three-quarters of her listeners raised their hands. “Good to know,” said Lynn, looking unconvinced.

Following the protocol of previous years, Lynn and her fellow lawmakers introduced themselves and launched into monologues about what committees they serve on and which bills they are championing.

Sen. Robert Olson was the first of the eight legislators in attendance to bring up Medicaid expansion. “You probably won’t see my name supporting a big tax increase, but I did support Medicaid expansion,” he said. People applauded.

Rep. Randy Powell rolled out some of the same erroneous arguments that Brownback has used to oppose denying Medicaid eligibility to people in the income gap, who make too little money to purchase private insurance but earn too much to buy a policy in the marketplace created by the Affordable Care Act.

By expanding eligibility to “able-bodied adults,” the state would have less capacity to take care of populations, such as disabled Kansans, whom the state already helps, Powell said.

The reference to able-bodied adults brought a chorus of jeers. It’s the same language Brownback uses to paint potential Medicaid recipients as slovenly folks who hang around the house all day in sweatpants. In reality, two-thirds of them are in the ranks of the working poor. It’s also false to argue that Kansas would be unable to help disabled persons if it expanded Medicaid.

“We’ve done the research,” somebody yelled at Powell.

And so it went. Lynn told the crowd that cash-strapped Kansas can’t add services such as Medicaid expansion without raising taxes. “Raise our taxes!” people called.

Notwithstanding years of cutbacks that have harmed Kansas schools, universities and services, Powell repeated the tired canard that “spending is out of control.”

“You’re out of control,” someone yelled. Others demanded an example of out-of-control spending. “I would look at the Board of Regents,” Powell said, referring to the oversight of the state’s university system. Bad choice. Many in the audience were educators.

A couple of the lawmakers won the crowd’s approval by stating their desire to eliminate the loophole that enables thousands of Kansans to avoid paying taxes on their business income. But overall, there was little common ground among some of Kansas’ most conservative lawmakers and their newly energized constituents. And when the meeting finally ended, with people chanting “veto override,” none of the legislators seemed persuaded to go that route.

Olathe has long been a haven for a particularly stubborn and sometimes even nutty type of lawmaker. Sen. Kay O’Connor, the Republican former lawmaker who infamously denounced the 19th Amendment while attending a League of Women Voters meeting, represented Olathe. That was 15 years ago. The latest crop of lawmakers is less colorful but still very hidebound.

Kansas has gotten a lot of national press recently for a supposed resurgence of moderates in the Legislature. That story line is mostly accurate. But without a way to dislodge the calcified Brownback from the governor’s office or crack a reactionary bastion like Olathe, big reforms like Medicaid expansion may have to wait.