Saturday’s march was about community, not judgment 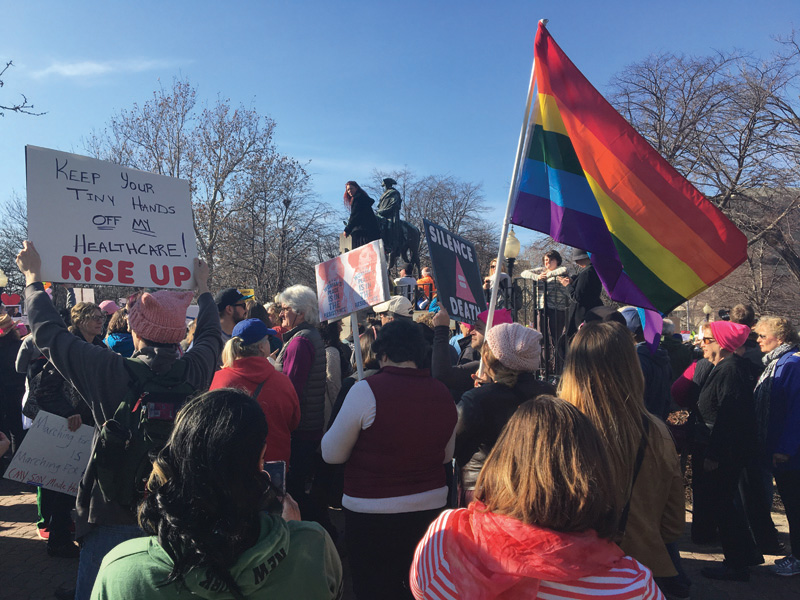 For the past couple of months, everything has been a little off.

Last Friday morning, for instance, should have been like any other Friday morning: I stopped by my favorite café and ordered an Irish-cream latté. But last Friday was Inauguration Day, so the barista thought I wanted my drink made with liqueur. I stopped him just before he dumped a giant shot of Bailey’s in my coffee.

“It’s not even noon,” I said, laughing off his mistake.

“I’ve had three Bloody Marys in the last 25 minutes,” he said.

He nodded and grimly turned to the next customer, an older woman in a pink pussy hat holding a large piece of folded poster board that might have said “Dump Trump.”

Everything has been more than a little off.

We all know what happened. We all know that, in our Harry Potter story, the Boy Who Lived somehow failed to secure Lord Voldemort’s final horcrux, which turned out to be a bottle of orange-tinted self-tanner. We’re living now under the Curse of the Cheeto.

The anxiety surrounding this hex has been building since November, but starting last week I noticed another emotion running beneath the icy surface of our collective angst, like an underground river: People have not lost their ability to hope that something better lies ahead. And such sanguine streams have a way of converging. 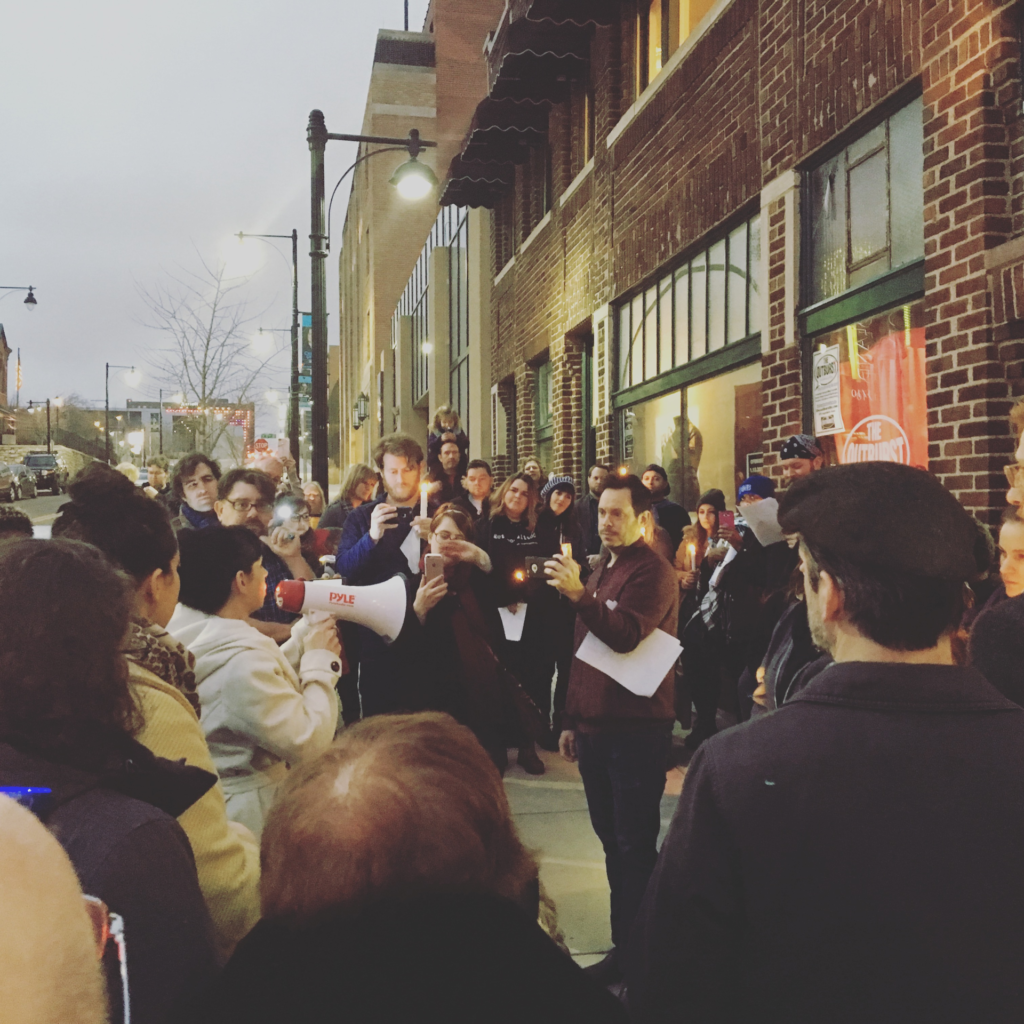 Thursday evening I witnessed one such gathering at the Fishtank Theater’s inspired Ghost Light Project, a nationwide event drawing on the longstanding tradition of leaving a single light burning in a darkened theater. At 5:30 p.m., coinciding with the crushingly early winter dusk, about 50 people stood on the sidewalk near 18th Street and Wyandotte with flashlights and candles, creating “a light for the dark times ahead,” per the project’s mission. After various arts groups pledged their commitments to diversity and inclusion, the group sang along to a recording of John Lennon’s “Imagine.”

“Hippies,” someone shouted when the song ended.

“Thank you,” a woman replied. “It’s been a long time since someone has called me a hippie.”

The simple, intimate protest felt like an antidote to the barrage of divisive negativity saturating the news. When hunkered down behind my computer haphazardly clicking links and consuming quick “facts” that only make me feel alone and threatened, it’s easy to forget that a whole community of genuinely kind souls who care about each other is only a short drive away. 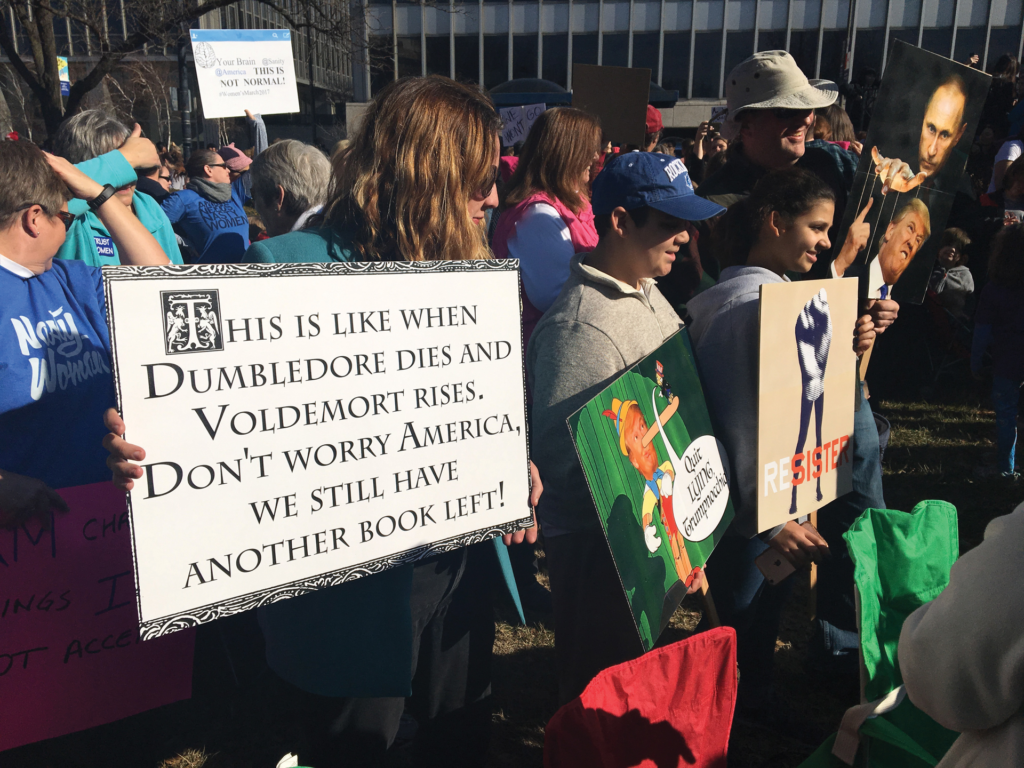 The day after the new president was sworn in, I headed to the Kansas City chapter of the Women’s March on Washington. I spotted the first pink pussy hats several blocks from Washington Square Park, their twin peaks bobbing up and down along Grand Boulevard, looking somewhat out of place on an unseasonably warm January afternoon. All that hastily knitted headgear would soon fit right in; estimates have put the turnout at about 10,000 people — and around the world, millions of other women and men participated in similar events, with some calling it the largest demonstration in U.S. history.

I didn’t have a pussy hat, but I, too, arrived searching for community — and for healing. As perhaps the most introverted introvert I know, I prefer to avoid crowds. But as a woman who has been sexually assaulted, I couldn’t quietly abide a president who — well, we all know what he said. Amid the sea of clever signs in the shoulder-to-shoulder crowd, filled with people who said “excuse me” when they bumped into you, I spotted a kindred spirit: Lingering toward the back, a woman hoisted a poster that read: “You know it’s bad when the introverts start marching.” I wanted to hug her, but introverts don’t hug strangers. 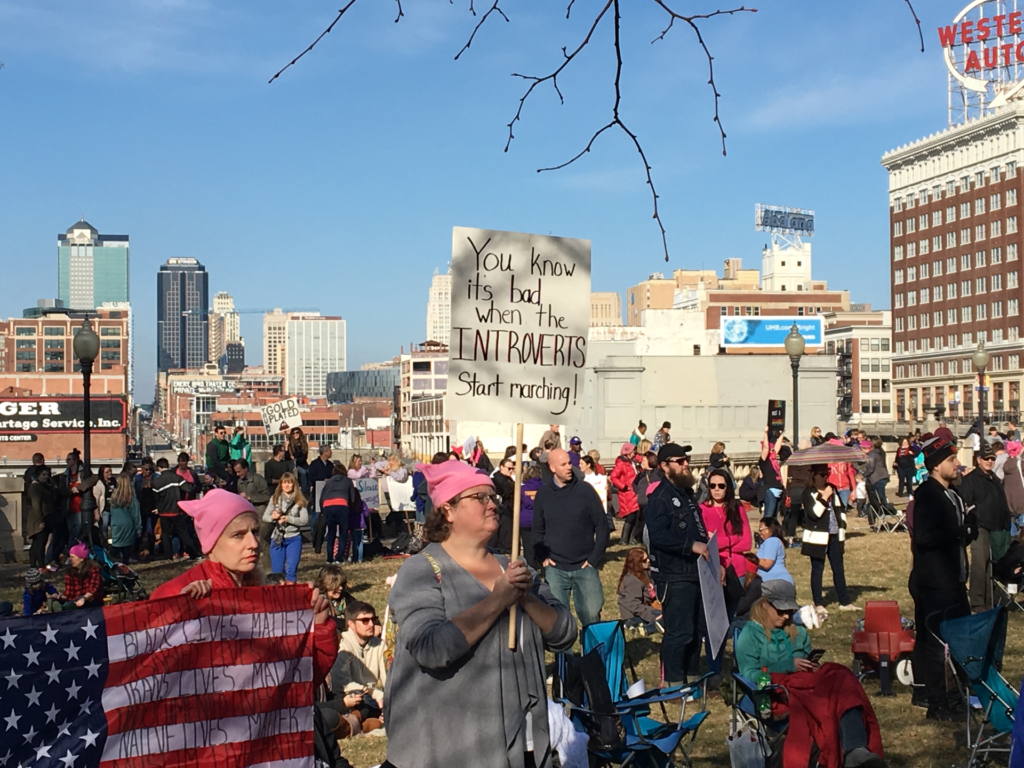 I ran into another friend, who told me he didn’t normally do crowds. “But I’m happy to be a part of this one,” he added. It seemed the march had attracted many people who normally might have stayed home.

Though anger and fear may have been catalysts, the energy at the park felt supportive — like an embrace rather than a backlash. Various speakers shared their experiences with sexual assault, reproductive struggles and discrimination, demanding equal rights for LGBT, minority, Muslim, and immigrant individuals, among others. City Councilwoman Jolie Justus provided the afternoon’s moment of Zen, inviting us to close our eyes, breathe deeply and feel the sun on our faces. For many of us, it was probably the first time we’d consciously tried to relax in months.

“The event was very hopeful, motivating and uplifting,” says Rachel Thomas-Kai, a school counselor who attended the march. “After long months of feeling so discouraged and disappointed with the election results and the way things are going, it was wonderful to get to meet with so many people and hear so many great speakers all coming together against issues of injustice and hatred and fighting for human rights. For the first time, I felt hope for the future. I knew that I wasn’t alone.”

In the days since the march, several people — men and women — have asked me to explain to them the point of such an event. Did it really do any good? My answer has remained the same: It’s less about the protest and more about the community. It’s about standing together with individuals who feel threatened, marginalized or forgotten and saying, “I’ve got your back, and I will fight for you.”

It might not look revolutionary yet, but this is how it starts.