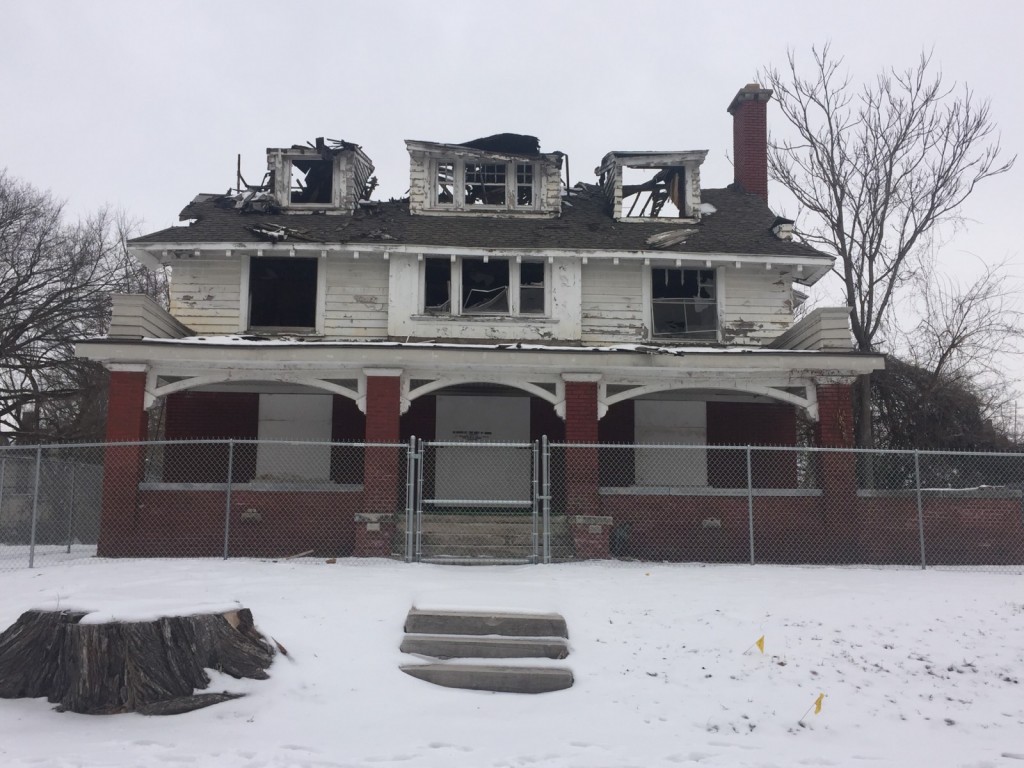 But Paige’s family, who live in town, say they want to be included in the planning process and have co-ownership moving forward.

“We informed (city officials) that we own the right to dad’s name,” says Linda Shelby, Paige’s daughter. “I stated that we wanted to be co-owners of the property in order to associate Dad’s name to the property, which would be tremendous value added.”

City officials say they have welcomed the family’s input but are following the Homesteading Authority’s guidelines.

“The Homesteading Authority’s acquisition of the property was premised on the understanding they would facilitate the cleanup and stabilization of the home prior to issuing an RFP (request for proposal) to identify a developer and owner,” says John Baccala, the communications/community liaison for the city of Kansas City. “Throughout this process, the Homesteading Authority has welcomed input from the Paige family and will continue to do so as the project moves forward.”

The family’s current concerns are with wanting to be made aware of the funding received, quarterly audits and other reports, Shelby says.

Fire destroyed the 2626 E. 28th Street residence in the Santa Fe neighborhood in May of 2018. Arson is suspected.

A progress report of the house from Historic Kansas City in March included a new front door installed, third floor demolished and cleaned up and an appointment with a structural engineer.

Home stabilization is almost completed and a new roof has been added, Baccala says. New shingles were scheduled to be completed by the end of this week.

“Debris inside was removed and the property was environmentally abated,” he says. “Work should be finished by the end of June and once it is, we plan to put out a Request For Proposal (RFP) for complete restoration.”

The revival seems like a step in preserving black history in Kansas City, yet Shelby and her sister Pamela O’Neal wish to be part of the planning as a co-owner of the house to ensure their dad’s legacy.

“If they’re not willing to put us on the deed then we aren’t going to allow them to use the name to raise funds,” says, Shelby, who lived in the house from the time she was born until it was sold 30 years ago.

Satchel Paige is an internationally known pitcher but he spent many years, including his last ones, in Kansas City.

He played until he was 60, consistently hurling strikes past batters’ knees. When his fastball lost its juice after an injury he shot back by perfecting a changeup. His confidence was legendary and he continually adapted as he aged. He was a prolific legend in the Negro Leagues, including playing with the Kansas City Monarchs, and then the Major Leagues. He lived in Kansas City until he died in 1982 and is buried in Forest Hill Memorial Park Cemetery.

Shelby remembers how her parents hosted dinners at the home for the Harlem Globetrotters when they were in town. It wasn’t shocking for Cool Papa Bell or Count Basie to drop in.

“It could be anything from goose, to duck to ham and brisket was one of her (mother’s) go-tos,” Shelby recalls. “Dad would make a gumbo and they put out a big spread. We would have to dance and put on a talent show. That is what that home meant. It was family and friends and you could leave that celebrity outside. It was just a place for them to relax and have a good meal and then go on with their journey.”

After her parents died Shelby says there was a lien on the house. It was sold to a mortgage company Shelby says she couldn’t afford it all the time. She says she and her siblings had always wanted to buy it back.

A few months after the fire in spring of 2018, Shelby met with city officials, but then didn’t hear back about the house’s future until after The Pitch featured the Paige house fire in its April 2019 issue about the saving black landmarks.

The Kansas City Homesteading Authority purchased the home to protect it in 2019. The push to restore the home comes from a collaboration of the city, neighborhood (Santa Fe) Negro Leagues Baseball Museum, Historic Kansas City and Rep. Emanuel Cleaver II.

Shelby wishes that family members could have had a chance to perhaps help raise funds to acquire the house but weren’t given the opportunity at the time.

When the family met with city officials they were directed to the National Trust for Historic Preservation, which later gave a $150,000 grant to help restore the house, Shelby says.

Upholding Paige’s legacy in Kansas City is a great concern for Shelby and O’Neal because other landmarks here are no longer prominent—the school bearing his name has closed, the neighborhood baseball stadium named after him is in disrepair.

Earlier this year the Kansas City Area Transportation Authority (KCATA) announced it planned to install a kiosk Paige’s honor at a bus stop at 27th and Prospect with a plaque. The family was on board until they were asked to release the rights to the name, which they declined.

The last correspondence from the family’s attorney in March regarding the house stated that based on “the lack of resolution of the ownership idea, the Paige family has decided to withdraw from future discussion and consideration from this matter.” It also stated the Paige family would no longer support the project and would not grant rights for using Paige’s name for promotion.

“If we are not listed as co-owners on the property, we have no legal stance to request audits, reports, invoices,” Shelby says.

Historic preservation efforts take many forms, says Tiffany Tolbert, a field officer for the National Trust for Historic Preservation, which provided the grant to stabilize the roof to kick off the project. Other significant stabilization and funding will be needed for the project.

“We are happy to help with the grant to stabilize the property,” she says, explaining how the organization works at the request of local officials. In historic preservation efforts, each project is different, she explains, and future plans will determine long-term usage of property and ownership.

City officials say that the Homesteading Authority “will continue to follow its established guidelines and procedures for the sale of the property.”

John Wood, director of Neighborhoods and Housing Services for Kansas City said since the Santa Fe neighborhood association has a vested interest in the project by securing the grant to stabilize the property any “request for proposal” would likely have their input.

“At this point, I don’t know what the RFP will look like,” he says.

Having a stake in the property is critical for the Paige family.

“Without being listed as co-owners on the property, we cannot endorse a project using our father’s name, over which we have no control,” Shelby says. “They could destroy my dad’s legacy.”

“Santa Fe Area Council started the quest to preserve the house well before it was vandalized,” says Marquita Taylor, President of the Sante Fe Area Council. “We sought funding along with some community partners, and brought in the Trust. Since that time, we have remained engaged in the renovations, and provide some security for the property that is currently owned by the city.  We very much want to be a part of the successful transformation of the property.”

Santa Fe Area Council started the quest to preserve the house well before it was vandalized.  We sought funding along with some community partners, and brought in the Trust. Since that time, we have remained engaged in the renovations, and provide some security for the property that is currently owned by the city.  So, to answer your question, we very much want to be a part of the successful transformation of the property.  Right now, that is the best answer we can give.