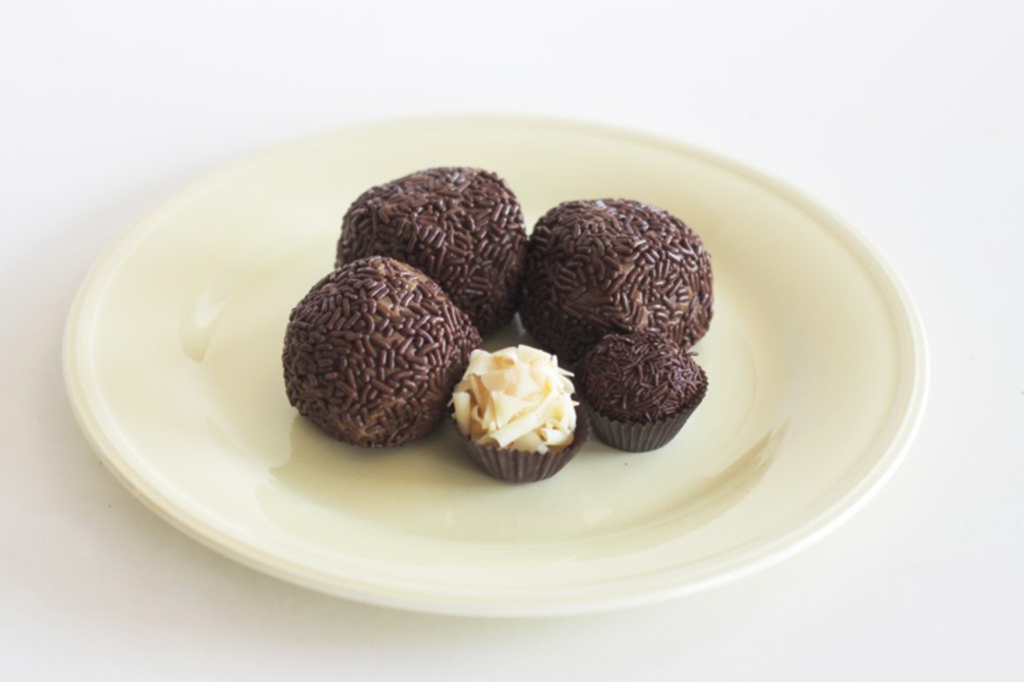 “It’s really more of a dessert,” Marco Rabello tells me when I ask him about the Brazilian brigadeiro. “It’s almost too rich to be a candy.”

Rabello is a reliable source when it comes to describing these sweet, decadent spheres — he’s a São Paolo native, after all. And he’s an expert at where to find them: for one, at the City Market shop and café Taste of Brazil Market (25 East Third Street), the business he co-owns with Cristian Maciel.

Here, a brigadeiro looks like something that could beat up a pingpong ball: a dense handful of chocolate concealing a creamy, buttery, full-flavored core. You imagine that it would be scandalous to eat one in a single sitting, though it’s tempting to try.

A more bite-size version of the confection, also made by a Kansas Citian born in Brazil, has recently come on the scene. Marcella Ibarguren’s company, Brigabon, offers its relatively demure bonbons at Natasha’s Mulberry & Mott (320 Ward Parkway, on the Plaza) and occasionally at the coffee shop Oddly Correct (3940 Main).

“They’re very sweet and very rich,” Ibarguren tells me. “I felt a smaller, bite-size version was more suitable to the very delicate taste of the sweets.” (It is indeed a very rich, very sweet bite.)

“Size is a personal preference,” says Brazilian–born Otavio Silva, husband of Kansas City Star food editor Jill Silva. “Typically they are made in small sizes. Some bakers even put coconut in a so–called ‘brigadeiro cake.’ But the real brigadeiro has only condensed milk, cocoa powder and butter, served in small sizes.”

The brigadeiro may be enjoying a novel moment locally, but it’s far from an obscure creation. It’s among Brazil’s most iconic sweets, Rabello explains. “It’s the dessert you simply have to serve at events like birthday parties or weddings. There’s a sense of nostalgia about the brigadeiro. We all grew up making them and eating them. You can’t have a celebration without them.”

Sources tend to agree that the candy entered the popular consciousness in Brazil after World War II, having been invented when sugar and milk were in short supply. Condensed milk was readily available, though, so home cooks and bakers used that and butter to make a caramel, blending it with chocolate or cocoa. (“There’s also a secret ingredient that I can’t tell you about,” Rabello says.) The resulting paste could then be rolled into balls and covered with, say, sprinkles.

A more colorful variation on the creation story holds that the brigadeiro pays homage to an actual Brazilian brigadier, Eduardo Gomes, a presidential candidate in 1945 who was noted for his good looks.

“That’s the story I’ve always heard,” Ibarguren says. “Eduardo Gomes was so handsome that the ladies who campaigned for him started making these sweets and passing them out to voters.”

His slogan: “Vote for the most handsome and single brigadier.” He lost. Stomachs gained.

Passing out the candies to make new patrons is still the order of the day, even in Kansas City. Rabello recently placed some 200 complimentary tiny versions of his brigadeiro into new hands at the City Market, and he says local interest in the sweet is increasing every month.

“We’re trying to educate the public about the dessert,” he says. “Some people don’t like them or think they’re too sweet. Some people love them. But we’re trying.”

Ibarguren may not need to give out samples when she sets up her booth at the Overland Park Farmers Market the first Wednesday night of every month this summer.

“I think they’re so delicious that people will want to try them,” she says.