Sakura Asian Bistro & Sushi Bar: a blend of the glamorous and absurd 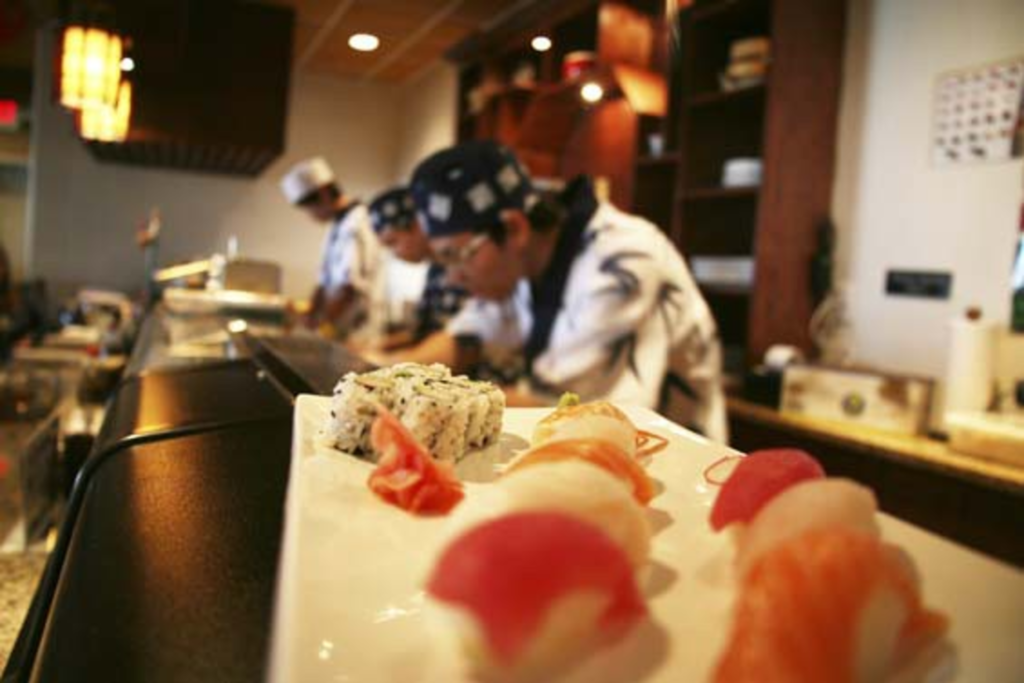 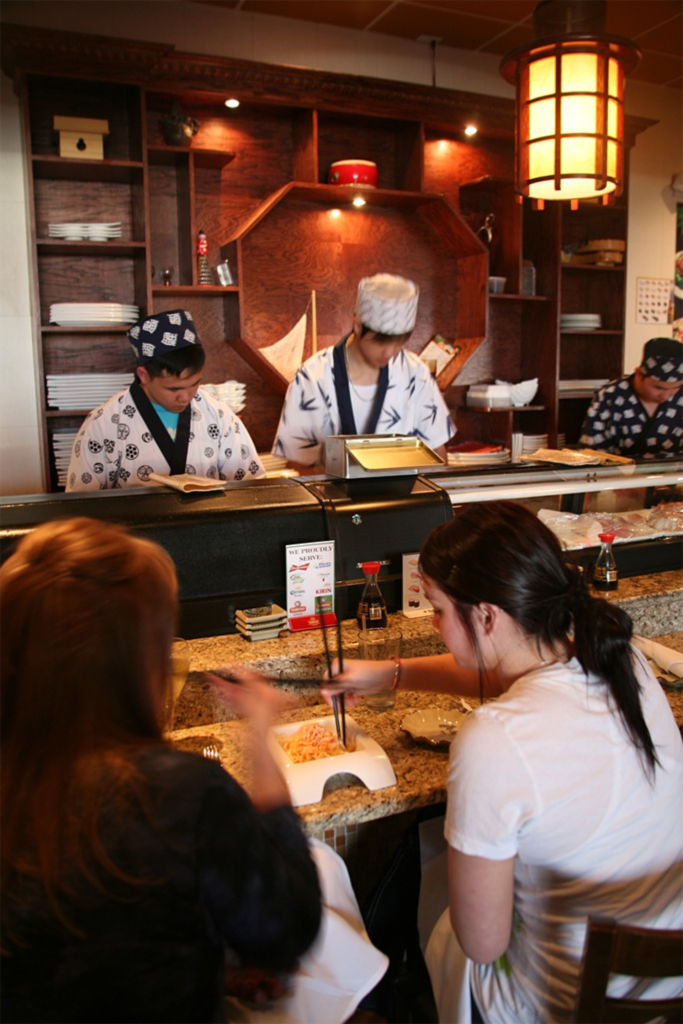 It’s important never to judge a restaurant — particularly a new restaurant — on a first impression. Why? One reason is that the experience one night can be completely different a few nights later. That was definitely the case at the expensively mounted Sakura Asian Bistro & Sushi Bar in Lee’s Summit.

It’s a beautiful restaurant, although some of the more eccentric decorative touches — the thicket of fake bamboo crawling with plush toy pandas, unexpected curtains of plastic beads (reminiscent of a 1950s movie whorehouse) — add a brazenly trashy note that tarnishes the sheen of the granite-topped tables, the mosaic murals and the expensive upholstery. But this blend of the glamorous and the absurd is one of the reasons that I like Sakura so much. It’s so out there that little irritations, such as inconsistent service and a couple of real clinker dishes, are easy to forget.

What wasn’t forgettable was the difference between dining at Sakura on a busy Friday night and on a more mellow Monday. True, Sakura has been open for only a couple of months, and the owners are still working out myriad kinks in the kitchen and dining room. (They’ve already crossed off the handful of Thai dishes on the dinner menu.) Their concept was ambitious from the beginning. In addition to the elaborate sushi menu and the now-deleted Thai dishes, the Sakura menu offers three Japanese noodle bowls, an array of fried tempura and teriyaki dishes, and traditional Chinese-American fare such as General Tso’s chicken and a Happy Family platter.

There’s something for almost everyone at Sakura. The name, according to one waitress, means “the blossoms of a cherry tree,” although the odd printing of the word on the menu looks as if it says sakuza. My friend Truman wishes that the restaurant was called yakuza, the name for organized-crime syndicates in Japan.

“This place would make a great setting for an action film,” he said. “Can’t you imagine a gunfight through that spray of artificial bamboo, sending toy panda bears flying everywhere?”

I couldn’t imagine that at all because the restaurant was packed with families, young couples, quite a few sushi-eating teenage girls, and two chubby young women who seemed mortified at having to spend another Friday night with each other instead of being on real dates.

“Does that remind you of you at that age?” I whispered to Carol Ann.

Without looking up from her heavy, leatherette-bound menu, Carol Ann said, “No. I always had dates on Friday night.”

And Sakura is a good date restaurant: Romantic elevator music plays on the sound system (including “Theme From Love Story“), and the starters are generous and easy to share. We enjoyed delicious squares of fried tofu and light, crispy spring rolls (meatless, it turned out). Iceberg-lettuce salads were doused in a kicky ginger dressing the color of Velveeta — that put me off at first, but what the hell, it tasted fine. Less fine was our server, an attractive young woman who had a shaky knowledge of the menu and was easily flustered. When we had a question about an item, she happily ran to the kitchen to find out the answer, but if she hadn’t told us otherwise, we would have guessed it was her first night on the floor.

And our dinners were disappointing. Truman thought his Two Flavor Shrimp didn’t have any flavor, much less two. “It’s a bunch of tiny shrimp, each embedded in 2 pounds of tempura with two boring sauces,” he sniffed. Marie loved the name of her dish — Seven Stars Around the Moon. Many of Sakura’s dishes are decorated in the same eclectic style as the dining room, and this one came adorned with a bird cleverly carved from a carrot. Unfortunately, that was more impressive than the jumble of sautéed beef, shrimp, scallops, lobster and vegetables in a slick brown sauce. Carol Ann ordered Akita Snapper, which came slathered in a hot chili-lime miso sauce; it would have been excellent if the fish hadn’t been fried to a fare-thee-well.

My own meal, snow-crab-stuffed jumbo shrimp “in a peanut wasabi sauce,” was served on a plate artfully adorned with two sauces that looked like squiggles of chocolate and vanilla and tasted like anything but wasabi or peanut.

Marie summed up the night succinctly: “The appetizers were better than the dinners, and the service was inattentive, to say the least.”

The following Monday, Truman reluctantly returned, joining Bob and me for a meal that turned out to be terrific. The lighting seemed softer, the mood much less chaotic. “It doesn’t even seem like the same restaurant,” Truman said. Bob loved the place right off. He admired all the oddball decorative touches and loved his starter of baked green mussels, plump and flavorful in a thick, creamy coating.

After perusing the assortment of rolls, sushi and sashimi on the menu, Truman and I shared a couple of first-rate special rolls: a Spice Girl concoction, made with peppered tuna and snow crab, and a Ginza roll, with salmon and fried onions. That day’s featured roll was something made with fresh peaches, but Truman wouldn’t go for it. “I draw the line at fresh fish and fruit,” he insisted.

He did love the gyoza soup, a punchy mahogany chicken broth with plump dumplings. I was revitalized by a cup of the fragrant miso soup, which perked up my appetite so much that I made an irrational decision and ordered the Dragon and Phoenix: a clump of heavily caramelized, too-sweet General Tso’s chicken on one side of the plate and a mound of cooked shrimp in a spicy tomato-based chili sauce on the other. It wasn’t dreadful, by any means, but a better name might be “Sugar and Spice and Everything Nice.”

Truman’s Seafood Delight lived up to its name (one of those Chinese-American creations with seafood — in this case lobster, shrimp, scallops, snow peas, carrots, broccoli and squid) in a thick cornstarch-based sauce. “It’s very bland,” he announced, “just the way I like it.”

Bob, who won’t eat sushi, got another house specialty: a hot metal platter sizzling with slices of beef and sautéed scallops “in a special sauce.” That special sauce tasted like traditional oyster sauce to me, but the waitress wasn’t giving away any secrets. She promised to go ask the chef what was in it but never mentioned the dish again. In any event, Bob said it was wonderful and proceeded to toss aside the chopsticks and finish his meal with a fork.

Bob’s dinner boasted another tiny carrot sculpture; this time it was a cute little crab. He actually played with it, as if it were a toy from a Cracker Jack box or a Happy Meal.

“Maybe if you’re a good boy and clean your plate, they’ll let you have a toy panda,” Truman said wickedly.

Bob did clean his plate and was too full for dessert — mochi ice-cream balls or banana tempura. “I ate too much,” he sighed.

So had the rest of us, perhaps discovering the true meaning of the restaurant’s name. We blossomed, all right — not into cherry trees but into new waist sizes.